The Last of the Windsors 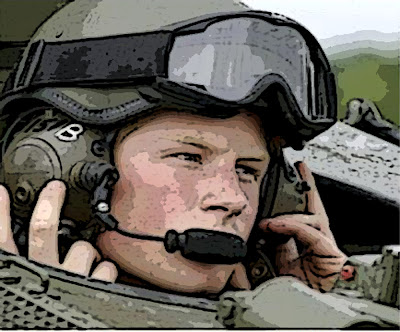 Prince Harry brandishes his riding whip at the photographers.

His words are drowned out by the mournful siren-calls of all his former girlfriends, dumped and being left behind by the cruel triumphant Taskmaster of the Realm.

“Left, right, left, right,” barks the Air Marshal. The fleet of Apache Attack Helicopters sails over the horizon leaving the geriatric set behind. Hell-bent for a rendezvous with the Enemies of the Empire, leaving rotting London behind.

After the Imperial Apache Fleet is gone, in the deathly silence a young hoodlum hardly tumescent on the tarmac asks, “Where the fuck are they going this time, huh?”

The editing is staccato and aggressive—we get high and just fuckin cut away. The royal fuck scene crashes into the film unexpectedly—the pace is relentless.

When the lights come back on—you can see the cockroaches swarming for cover. The cracks in the cancerous sweaty walls—all crammed with the filthy buggers.

After Harry gets off, the showgirls are just left standing there really dumbed-down & stupid—they don’t even register orgasms anymore. The guys are buttoning up their flies—getting ready to split from the joint. The helicopters are warming up.

The news about “The Last of the Windsors”—has already leaked to the Sun, the Times and the Sunday Times in Britain. Murdoch's media empire also got onto it fast—with Fox News, the Wall Street Journal, the New York Post.

Even the Old Grey Lady herself—The New York Times is bitchin like mad. Her Sword of Damocles is taking its usual sideways swipes at everything—with the latest scandalous news.

Scarabs are crawling outta Egypt—old Mafia and Yakuza Godfathers are back clomping around the streets again. Their cement shoes banging up Fifth Avenue—heading for the coke stoves and mildewed villas down there in the Beltway

The Pope was seen riding in an enormous golden pumpkin Cadillac—down thru secret hushed hide-and-seek Rome backalleys covered with camelias and black widows.

Silkworms have been reported worming their way into the Vatican—caterpillars and cocoons strewn thru St. Peters. Bernini’s columns crawling—with Tennessee Williams, Gore Vidal and The Roman Spring of Mrs. Stone’s kept gigolo boyz. It’s no longer a great secret—Prince Harry is going to be the new Queen Bee!!! Just wait and see!!!
Posted by pugetopolis at 10:44 PM