Lord of the Lizards II 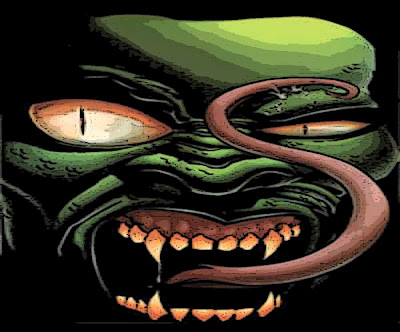 “There isn’t anyone to help you.
Only me. And I’m the Beast.”
—William Golding, Lord of the Flies

He had a long pink lizard tongue—perfect for cutey-pie cunninglingus. The screamy ones especially—they loved his slithery evil serpentine tongue. At first, anyway—before things got nasty.

There had to be something wrong—with a guy like that. With a tongue a foot long—a forked tongue French tickler that wouldn’t quit. They loved it at first—but then later on they always turned into screamers. When the lights came on…

But Lizard Boyz were different—they could pass too. But once the lights went out and they got down to having sex—that’s when the Lizard came out & all hell broke loose.

The tongue a sure giveaway, once it got up there inside—or down their throats then there was no stopping it. A lizard has a one-track mind & it isn’t very pretty. Before you know it, you’ve been reamed inside out…

The Lizard Boy got into it—he didn’t have a choice. He wasn’t human anymore, he was a lizard with legs. The Lord of the Lizards spoke thru him, the kid could feel his swollen tongue but it said nothing.

“You’re just a fuck-up piece of shit,” the Lizard Lord said to him. “Just an ignorant Yakuza jerk-off.”

The kid agreed with the Lizard Lord, answering him in the same silent voice. "Well, then,” said the Lord of the Lizards, “you’d better run off and get something to eat. You liked Piggy didn’t you?”

The Lizard Boy tilted his head slightly, his eyes couldn’t break away and the Lord of the Lizards hung in space before him.

“What are you doing out here all alone? Aren’t you the fuck afraid of me?”

The kid shook his head.

“There’s nobody to help you. Only me. And I’m the Lizard Lord.”

The kid’s tongue froze, then he said it.

“What a stupid fuckin thing to say,” the Lord of the Lizards said. “I didn’t create you, you created me!!!” For a moment or two the ruined skyscrapers of Tokyo echoed with the parody of laughter. “You knew that, surely, didn’t you? You’re a part of me and I’m a part of you. The DNA mad scientists did us both in, you child-idiot. I’m the reason why it’s no go. And you’re the reason why things are what they are…”

The skyscrapers shivered again. The ghosts of dead scientists were laughing. It was all so sick.

The kid’s head wobbled & weaved. His eyes were half closed, knowing the obscene thing he was. The pig on the stick in Lord of the Flies—was now the pig between his legs in Lord of the Lizards.

“You poor thing. Do you really think you know better than I do? Go ahead and be who you are, misguided spawn of monkey-brained child idiots!”

The kid was falling—down inside a mouth. A slithery serpent tongue was wrapped around his ankle, pulling him down into darkness. He lost consciousness…

Posted by pugetopolis at 5:49 PM