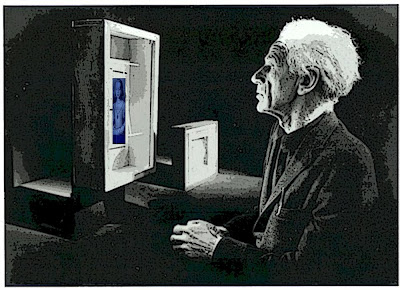 INTERVIEWER: Today we have the great honor and privilege to talk briefly with the distinguished author Alfred Lambremont, author of the ground-breaking book, “EXOPOLITICS: POLITICS, GOVERNMENT AND LAW IN THE UNIVERSE. Good morning, Mr. Lambremont.

INTERVIEWER: One of the obvious problems with time travel, it seems to me, is how difficult it seems to be on the psyche and physical health of the transportees..

LAMBREMONT: Yes, there were and probably are still time traveler problems—both physical and mental.

INTERVIEWER: For example, Basiago mentions “heart murmuring” with some of his fellow time travelers.

LAMBREMONT: First of all, Project Pegasus needed to use children because the holograms created by the chronovisors would collapse when adults stood within them. That was one problem. Another problem that the program sponsors found was after moving between time lines, adult time travellers were often undergoing various kinds of physical and mental stress. Some transportees were developing heart valve problems and others becoming mildly insane.

INTERVIEWER: Which is why Basagio and young DARPA inductees were used? Conditioning them to avoid time traveler mental distress and anxiety? As well as having young healthy physiques?

LAMBREMONT: To a certain extent, yes. I’m an attorney not a psychiatrist, so please don’t view me as an expert witness on such matters. I can only say that, according to Basagio, it was hoped that by working with gifted and talented children from childhood, the U.S. government might create an adult cadre of “chrononauts” capable of dealing with the phyical-psychological effects of time travel.

INTERVIEWER: In the case of Michael Relfe, it seems, a rather unique way of solving many of these “displacement” anxiety or mental stress problems was simply to age reverse the transportees and time shoot back to their space-time origin point. That way their memories are blocked.

LAMBREMONT: Yes, in contrast to the chronovisor probes, in which a form of virtual time travel is achieved—the teleporters developed by Project Pegasus allowed for physical teleportation to distant locations, sometimes with an adjustment forward or backward in time of days, weeks, months, or years.

INTERVIEWER: Would this reversal take care of or submerge perhaps any temporal displacement physical and/or mental problems into the subconscious? Can memory really be erased?

LAMBREMONT: Remote sensing in the time-space continuum is a very complex subject. It was then—and I’m sure it’s even more so now. It’s difficult to discuss such Black Budget problematics, however—especially since the tendency is for Black Projects to get even “darker.” The darker Black Projects get—the less information is shared beyond the tight circles of the typical Breakout Civilization intelligentsia.

INTERVIEWER: Basiago and Relfe seem to have been permitted to be “kosher” whistleblowers about such Black Project matters though.

LAMBREMONT: Well, one must understand that what these gentlemen are whistleblowing about is by now rather dated material. The cosmic cognoscente have permitted such disclosures since they have intelligence about the future that we don’t.

INTERVIEWER: In fact, wasn't Basiago pinpointed by TPTB as a future key proponent player of the forthcoming Telsa technological breakthroughs and speaker in the future for remote sensing in the time-space continuum arena?

LAMBREMONT: It appears that way, doesn’t it?

INTERVIEWER: Along with prognostications about future POTUS candidates such as Obama?

LAMBREMONT: It’s beginning to appear that way, isn’t it?

INTERVIEWER: I mean the DARPA intelligentsia could have treated Basiago the way they treated Relfe. Time reversing him back and erasing his memories so that he wouldn’t be able to report his boyhood adventures, such as getting to hear Lincoln give the Gettysburg Address?

LAMBREMONT: The problem is that if Basiago is a cogent intelligence asset who writes and delivers an important paper about Martian exopolitics in the near future, then how can the cognoscenti erase his mind like they did with Relfe?

LAMBREMONT: Precisely. Yes, “The Discovery of Life on Mars” published in 2008. It was the first work to prove that Mars is an inhabited planet. But they had time-transport copies of the paper back in the 1970s—his father even showed him a copy when he was still an adolescent.

INTERVIEWER: But it’s been quite awhile since his early time traveling dayz. Project Pegasus and Rumsfeld are from the Nixon dayz back in the 1970s. We’re into a whole different cycle of 2010-2012 catastrophic and near-catastrophic scenarios going on.

(At this point the interview ended. I still had many questions to ask—in regard to time traveling. Such as the 2010-2012 catastrophic and 2010-2012 near-catastrophic futures coming up side by side.

3 It may be that Presidential-level decisions about the submerged DC Beltway scenario viewed in the early 1970s have been acted on. With the commencement of underground shelter preparations like the Denver Airport? On the basis of Project Pegasus and more recent time-travel intelligence about the 2012-13 catastrophic timeline—what other preparations have been made by the Elite?

4 How has time-travel intelligence changed since the 1970s? What are the exopolitical implications of viewing/designing hyperdimensional events like Fukushima and other scenarios? Has anybody started playing “God” yet—strategically playing with time lines?

5 For example, the Mars assignments. Do exo-chrononauts still spend 20 years’ duty cycle on Mars and other planets? At the end of their duty cycle, are they still age reversed and time shot back to their space-time origin point? Are they are sent back with memories blocked? Are time travel personnel still sent back to complete their supposed destiny on Earth?

6 Is there such a thing as the Military Industrial Extraterrestrial Complex (MIEC)? In regard to “The Mars Records” by Stephanie Relfe, B.Sc. Vols I and II (Michael Relfe's Memoirs of 20 years at the U.S. secret base on Mars).

7 Are there secret bases on the Moon, on Saturn and its artificial planetoid satellites—as well as forward strategic military bases for occupation or defense in the rest of the solar system? Have we teleported beyond the Ort Belt—into any local Milky Way galactic solar systems?

8 Are past whistleblower witnesses besides Michael Relfe and others still talking? Such as former U.S. Army Command Sgt. Major Robert Dean and former U.S. Department of Defense scientist Arthur Neumann?

9 Are VIP's still OFF LIMITS? Politicians and other Terran important people who travel to and from these strategic solar system bases by jump gate? Are they time traveled back with memory reversal and erasure like the permanent staff? Surely not.

10 Would Dr. Jean Maria Arrigo, an ethicist who worked closely with U.S. military and intelligence agencies, as well as U.S. Army Captain Ernest Garcia, U.S. intelligence—and other expert witnesses be willing to testify in regard to any future exopolitical legal proceedings?