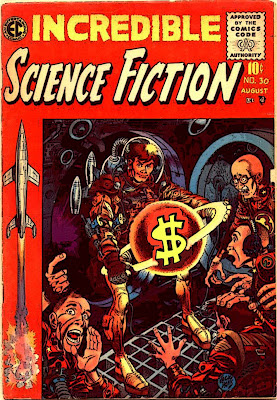 Exopolitics, Planetary Politics and
Business Law in the Universe

Is Earth a Corporate Planet?

Will Exopolitics turn this dominant late capitalism view of our Planet upside down?

What if Exopolitics reveals that we live on a busy corporate planet in the midst of a populated, evolving, and highly organized interplanetary, inter-galactic, and multidimensional Business Society?

Rather than being quarantined for eons from a more advanced, evolved Universe society—what if Earth has always been a busy corporate hub of a Galactic Business Civilization?

Recent Exopolitical research assisted by DARPA time travel and teleportation communications from the Telsa Tech Inc. corporate headquarters in the Fourth Dimension—suggest a supposedly hyperdimensional world seemingly isolated in the Third Dimension, but actually Earth is the vital center of a Fourth Dimensional world of many technologically and spiritually advanced civilizations.

The Third Dimensional Planet paradigm we know as Earth is actually a cleverly disguised hyperdimensional quantum jumping-off point disguise for disengaging our world from this unique, challenging Fourth Dimensional Gateway out of human history into another universe...

Whether this Fourth Dimensional Galactic Corporation is any better than our own “present timeline” troubled Planetary Business and Politics venue remains to be seen. The NWO POV attempt to turn this beautiful Blue Marble planet into a single late-capitalism planetary sphere of influence has many corporate complications and political implications.

But then Terra Politics has always been tampered with, modified with DNA replicant politics, plunged into interdimensional conflicts—and subjected to the usual so-called “nefarious and beneficent” Sugar Daddies, Barons and Big Daddies throughout its own history, e.g. the steel barons, the railroad barons, the oil barons and now the ET barons. Things happen; rules are meant to be broken.

Corporate business, law and diplomacy take on new perspectives and forms of analysis—when time shifts from Third Dimensional Matrix to Fourth Dimensional Matrix phases into and out of existence for us lower dimensional peons. While the Elite who think they are insiders with connections—are just as much suckers as the rest of us Terra know-nothing rubes.

But then, as a wise old Exopolitical scifaiku poet named Bashō once said in his “The Narrow Road to the Deep Fourth Dimension”—

A thicket of asteroids—
Is all that remains
Of the dreams and ambitions
Of ancient emperors.