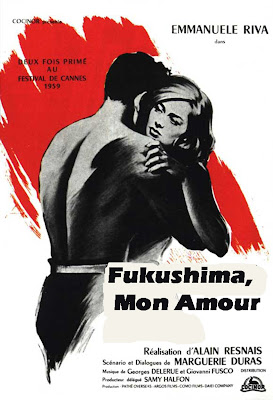 SHE: The news films made it all authentic. No illusion, it’s quite simple. One can always scoff, but what else can a person do, really, but cry? I always weep over the fate of Fukushima. Always.

(A panorama of a photograph taken of Fukushima after the bomb, a “new desert” without reference to the other deserts of the world.)

He: No. What would you have cried about?

SHE: I saw the newsreels.

(The coast, empty under a blinding sun that recalls the blinding light of Hiroshima. Newsreels taken after March 11, 2011. Ants, worms, people emerge from the mud. Interspersed with shots of the tsunami moving inland like a wall of raging water. Destroying everything in its path.)

SHE: I saw the newsreels. On the next day, things began to rot in the heat. They found rotting bodies for weeks afterwards. Dead people. Dead dogs. Dead cattle. All of them dead for eternity. I saw them. I saw the newsreels. I saw it all. On the first day. Then on the second day. It’s been that way ever since…

SHE: …two months later. Fuckushima was blanketed with flowers. There were cornflowers and gladiolas everywhere, and morning glories and day lilies that rose again from the ashes with an amazing vigor, quite unheard of for flowers tell then. I didn’t make it up.

SHE: Nothing. Just as in love this illusion exists, this illusion of being able never to forget, so I was under the illusion that I would never forget Fuckushima. Just in love.

SHE: I also saw the survivors and those who were in the wombs of the women of Fukushima.

(Shots of various survivors: a beautiful child who, upon turning around, is blind in one eye; a girls looking at her burned face in the mirror; a blind gril with twisted hands playing the zither; a woman praying near her dying children; a man, who has not slept for years, dying. Once a week they bring his children to see him.)

SHE: I saw the patience, the innocence, the apparent meekness with which the temporary survivors of Fukushima adapted themselves to a fate so unjust that the imagination, normally so fertile, cannot conceive it.

SHE: Listen… I know… I know everything. It went on and on…

HE: Nothing. You know nothing.

HE: Nothing. You know nothing.