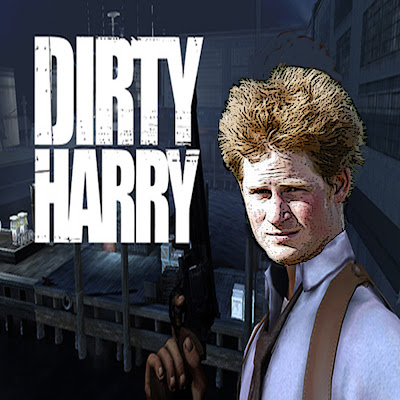 A San Francisco cop with little regard for rules (but who always gets results)—tries to track down a serial killer who snipes at random victims.

In this remake of the famous Clint Eastwood classic Dirty Harry (1971), San Francisco faces the terror of a new maniac known as The Snake—who snipes at innocent victims and demands ransom through notes left at the scene of the crime.

Inspector Harry Callahan, known as Dirty Harry by his peers through his reputation handling of homicidal cases, is played by young Prince Harry who’s assigned to the case along with his newest partner Inspector Lady Gaga to track down Snake and stop him. Using humiliation and cat and mouse type of games against Callahan, Snake is put to the test with the young cop with a dirty attitude.

Inspector 'Dirty' Harry Callahan is dirty. How dirty? He hasn’t taken a bath in 2 years—he’s dirtier than the sinister, distasteful Snake himself. Dirty Harry (Prince Harry) just has a down & out plain dirty attitude toward thugs & criminals...and himself. He’s just as bad & dirty as them—except he holds the Badge. And a big Magnum—down between his legs.

What’s soured Dirty Harry so badly? It’s the societal coddling of criminals—that’s led to the downfall of the criminal justice system. Dirty Harry has no patience for criminals and even less for revolving-door justice as well as politicians who wilt under the pressure of a deranged, aging baby boomer public & a bunch of naïve, unemployed gullible slobs.

Dirty Harry must break societal rules to stop the madman Snake—as well as the madman society that allows him to roam free. The debut of SFPD Inspector Harry Callahan by the goodlooking new young British star, Prince Harry, begins with a horrible sociopathic Snake strangulation of a young woman on a bus—and then trying to extort $100,000,000 from the City.

Harry is asked by his boss, Lt. Badass and the Mayor to put a stop to this scummy, low-life, no-good reptilian creep. While Harry & his new partner, Lady Gaga, investigate—yet another strangulation occurs, followed by the kidnapping/rape of a young BART commuter, and a subsequent attempt at extortion by the killer, who calls himself The Evil Beaver Snake. Harry volunteers to deliver the ransom but is nearly killed by the Snake.

Harry follows the Snake’s trail to the Castro District, where he discovers the hibernating Snake suspect—along with a viper’s nest full of young slithering Snakes recently hatched in the back of the Castro Theater. The Snake gang is rounded up & arrested and Harry gets the Snake’s location out of them.

Unbeknownst to Harry, the Mayor & the D.A. are all Snakes too—the so-called bleeding-heart legal system and judiciary is run by a nefarious Lizard Mob that operates in all the major metropolitan areas around the country. Especially the Beltway & the District of Columbia!! What a shocker!!!

Soon Dirty Harry is on the run in San Francisco—his very existence depends on his snaky superiors & his prospects look bleak. Even though his future looks like a miserable one—he still refuses to play by the rules. Dirty Harry wears a Kevlar jockstrap to protect himself from the famished Snakes—and he doesn't carry an arsenal of automatic weapons. All he needs is his .44 magnum you-know-what.

One shot doesn't seem like much, but it's enough when you rarely miss and a single shot can knock a Snake into the next millennium. Dirty Harry fondles himself—and ends up in Candlestick Park, the home of the San Francisco 49ers. The Snake is leading a rally of all the other SF Snakes.

Now is Dirty Harry’s chance—all the Snakes in one big moiling snaky stadium. Across the football field, Dirty Harry calmly takes aim and nails the Snake all with his magnum meat—standing there at the 50-yard line. The giant spluge shot lifts them all up and flips them into oblivion.
________________

Dirty Harry and Lady Gaga—swoop away in their sleek Apache helicopter back to London for their lovely honeymoon!!! First a stop at Sally’s Tits—between the two rounded Clee Hills near Ludlow, Shrops.

And then Biggus Dingus, the well-endowed Cerne Giant carved into the quaint Dorset hillside. And then over Harry Potter Viaduct and Stars Wars Valley—to Scotland & Donkey’s Dong off the Welsh coast!!!

Then she got the next shot of his manly Magnum...