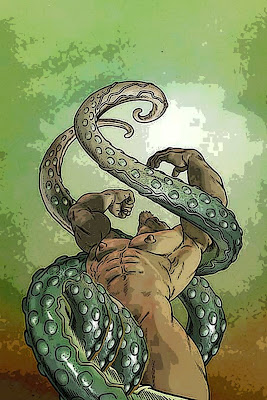 “The dream: to know
a foreign (alien) language
and yet not to understand it”
—Roland Barthes, Empire of Signs

This is what dreams do—especially with our Greek Aristotelian English language. It skips superficial sociality of discourse, communication. It’s vulgar, sexual, inconceivable—untranslatable, shocking, cuts out our tongue.

Dreams return us to our prehistoric nature—our “constrained” reptilian heritage. Dreams open up a whole fictive realm—primeval reptilian-brain texts (but no novel) permits us to perceive a Jurassic Park landscape which our speech can’t articulate. It’s too horrible to comprehend with our warm-blooded mammal cerebrums—so we project it onto Lizard UFO’s & Subterranean Evil Intelligences.

Dream-language is a Reptile-language—it distinguishes humanoid (human and/or replicant) from reptile consciousness on the level of its verbs “to be.”

The fictive characters introduced into a dream (once upon a time there was a lizard boy) are assigned the form of Lizard life—the reality of reptilian beings, the very structure of the Id restoring or confining these beings to their quality as Snakes cut off from the alibi referential par excellence: that of the living naked ape.

Or in a still more radical way—since it’s a matter of conceiving what our monkey language doesn’t conceive—how can we imagine a Reptilian verb which is simultaneously without a humanoid, transitive subject & without a human known object?

Yet it is this reptilian imagination which requires us—to face the Hindu dhyana, origin of the Chinese ch’an & Japanese Zen which we obviously can’t translate by human language.

The Reptilian mind isn’t just a primitive brain-stem throwback at the base of our monkey-brain skulls. The horror of our heritage is so great—we’ve been bred & genetically-engineered with a Right Brain-Left Brain Apocalyptic Schism to keep us sane.

We are the Naked Ape Lizard progeny of the Reptilian Annunaki—we’re Snakes who walk around on two legs. Adolescent nocturnal emissions & teenage wetdreams—are Lovecraftian flashbacks to our haunting Serpent exopolitical histories.

Posted by pugetopolis at 7:57 PM