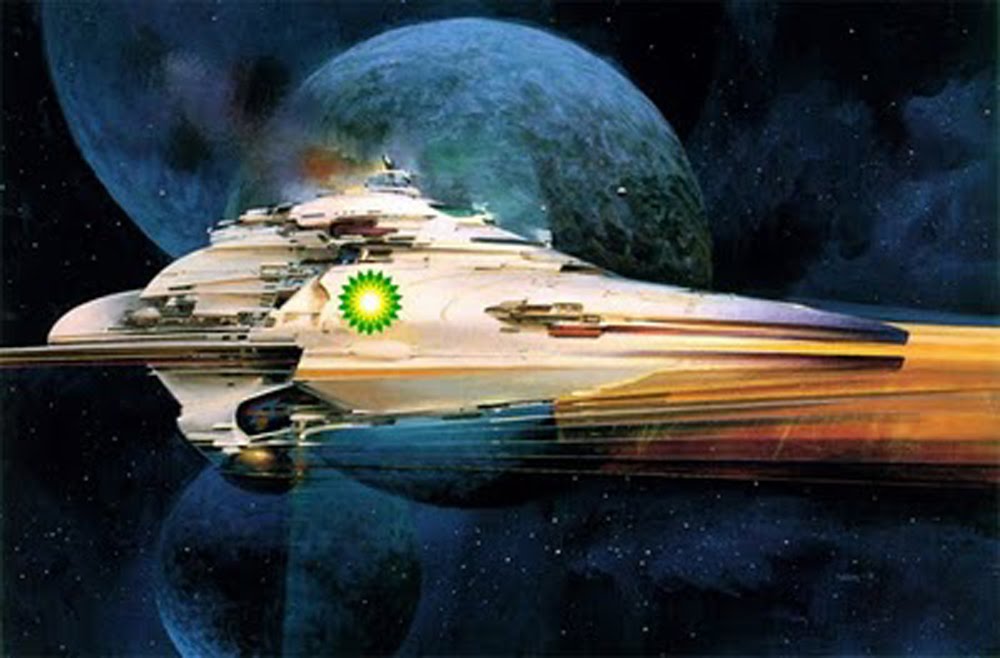 “Utopia has always been a
political issue, an unusual
destiny for a literary form.”
—Frederic Jameson, Archaeologies of
the Future: The Desire Called Utopia
and Other Science Fictions

louisiana—
a satellite takes a pic
the gulf coast is toast

the same with libya—
as well as the japanese
archipelago

It’s really pretty simple. All you gotta do is look around—and pay attention to contemporary events. Like the Gulf of Mexico oil spill or Japanese meltdown—worse than Valdez or Katrina. Chernobyl and Three Mile Island?

Anybody who still thinks the BP oil spill was an accident—is a fuckin’ fool. Big Oil is Big Brother now—and these guyz don’t fuck around. Look at Iraq. Afghanistan. Japan. Libya is next.

BP and the other Big Oil Barons—they make all the Steel Barons, the Railroad Barons, the Wall Street Barons look like a bunch of old whores—all dressed up & nobody to blow.

Dick Cheney—masked “Darth Vader” himself. Gives it all away back when he says—“Never before has Big Oil been totally in control of foreign policy, international war and the destiny of the planet. That was then—but this is now.”

Take heart though—it’s not gonna be like Orwell’s “1984” or Huxley’s “Brave New World.” Nor is it gonna be like Stanislaw Lem’s “Solaris” or even Yevgeny Zamyatin’s “We.” If anything’s it’s gonna be more like—“Lord of the Flies.”

SF writers today—need to wise up. And study a little Japanese economic history. What we see now—has already happened before. The idea is to conceptualize Western future shock—like it’s already happened in the East.

“I have felt that a plot of this kind is to be grasped as what I will call a historical ideologeme: a specific narrative unit which in and of itself—in its own formal language—transmits
a historical message or meaning.”—Frederic Jameson, Archaeologies of the Future: The Desire Called Utopia
and Other Science Fictions

how many planets—
don’t quite make it outta late
capitalism?

The BP Tokugawa shogunate, also known as the BP bakufu and the Edo bakufu, was a feudal Japanese interplanetary energy company established by Tokugawa Ieyasu and ruled by the shoguns of the Tokugawa family.

This period is known as the Edo period and gets its name from the capital city, Edo, which now is called Tōkōyo. The Tokugawa BP shogunate ruled from Edo Castel on Titan from 2010 until 2068, when it was abolished during the Neo-Meiji Restoration.

First as multinational oil company (“oil major”) and then later as interplanetary energy corporation (“solar major”— the BP Tokugawa shogunate was Japan’s largest space corporation, with its BP Japan headquarters in two offices in Roppongi Hills and Gate City Ohsaki. The Osaki office was the headquarters of Terran businesses. The planetary business offered products and services such as metalworking fluids and performance lubricants to manufacturing industries such as automotive, machineries, metals and fabricated metals and electronics.

emerging from the—
the first android revolution
cryogenic wars

BP America's headquarters had been located in the Two Westlake Park complex in the Energy Corridor area of Houston, Texas. But WWIII (known as the Great Dystopian Apocalypse) had all but turned that part of the planet Earth into a radioactive wasteland.

The BP Tokugawa shogunate was among the largest space sector energy corporations in the solar system, and one of the six “supermajors” (vertically integrated private sector zero-energy exploration, heavy metal and anti-gravity drive product marketing companies).

Following the Sengoku Period of WWIII, the central Terran government had been largely reestablished by Oda Nobunaga and Toyotomi Hideyoshi to the offshore Titan Castel during the Azuchi-Momoyama period.

After the Battle of Saturn’s Rings in 2012, central authority fell to Tokugawa Ieyasu who completed this process and received the title of Solar shogun in 2013. In order to become Solar shogun, one traditionally was a descendant of the ancient Exxon clan.

Society in the Tokugawa BP solar shogun period, unlike the Terran shogunates before it, was supposedly based on the strict class hierarchy originally established by Toyotomi Hideyoshi. The Titan daimyo, or space lords, were at the top, followed by the warrior-caste of space samurai, with the farmers, artisans, and traders ranking below.

In some parts of the solar system, particularly remote regions, Titan daimyo and space samurai were more or less identical, since daimyo might be trained as samurai, and samurai might act as local space lords.

solar samurai—
warlords on distant planets
moons beneath the sword

Otherwise, the largely inflexible nature of this outer space social stratification system unleashed disruptive forces over time. Taxes on the planetary peasantry were set at fixed amounts which did not account for inflation or other changes in monetary value.

As a result, the tax revenues collected by the space samurai landowners were worth less and less over time. This often led to numerous confrontations on Mars, Titan & other Saturn satellites, between noble but impoverished space samurai and well-to-do planetary peasants who’d become wealthy planet-owners.

terra birth defects—
mutant creepazoidal dreams
in through the backdoor

These interplanetary conflicts ranged from simple local disturbances to much bigger interplanetary rebellions. None, however, proved compelling enough to seriously challenge the established order until the arrival of the Alien foreign powers…

Immigration policies were strained when the Aliens demanded Titan bases and employment in the mining colonies populating the rich Rings of Saturn.

Toward the end of the 21st century, an alliance of several of the more powerful Titan daimyo, along with the titular Earth Emperor, finally succeeded in the overthrow of the BP Tokugawa shogunate after the tragic Battle of Triton.

But rebels with the assistance of the Aliens took over Triton, one of Neptune's largest fortified moons, and the resulting atomic warfare damaged the gravity of Triton, slowing it down and making it drop closer and closer to the planet. Millions of lives were lost as Triton finally came close enough for gravitational forces to break it apart.

The beautiful Saturn-like rings that formed around Neptune was bright enough to be seen from Earth. The rebel alliance was crushed—yet the Aliens somehow escaped through a rogue orbiting black hole that appeared and then disappeared into nowhere.

midway between moons—
the abandoned aliens
fled to earth bunkers

The rogue Alien taskforce was rumored to be hiding underground beneath ancient Poughkeepsie. None dared enter the contaminated Earth-space in pursuit however—because of the heavy radioactivity still polluting the once beautiful homebase of mankind.

See “Late Tokugawa BP shogunate” for details.
Posted by pugetopolis at 8:21 AM