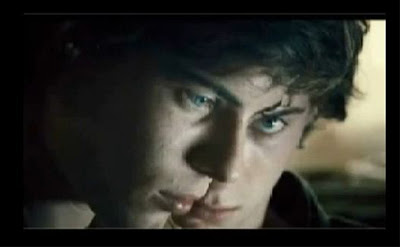 I don’t faint or swoon so much anymore—not like I used to do. Back then the first time—when Magwitch got me in the old churchyard cemetery.

That was a long time ago down by the river—in that other cemetery world of the Living Dead. That lonely courtyard where my family was buried—my mother, my father, my brothers and sisters.

They must have turned in their graves—me up above getting manhandled by Magwitch that way. Especially because I liked it and wanted it some more—shoved up against that old rotting tombstone. The way we made love again & again—beneath the scudding dark moody cloudy sky.

There’s nothing as exquisite and ruthless—as a young runaway escaped convict. Needing to make love one last time—before the hangman’s noose jerked his neck and made him go spaz for eternity.

But I helped Magwitch to escape and get away—leaving me all alone back then. To sullenly grow up a bored blacksmith’s young apprentice—never to forget the way he made love to me that dark day.

And how I pleaded with him—to do me again because it felt so good. And how Magwitch made love to me again—except more slowly and gently the second time. I guiltily confess and even now feel so ashamed to admit—that the 3rd time was even better!!!

So that now years later looking back on all that—lounging and lollygagging here in this swanky captain’s hammock on the high seas. That yes indeed, it probably was an unforgivable sacrilege back then—to be so greedy and needy for shameless love back then.

But what about now? Am I any different and less shameless—here now compared to back then? Here aboard this ship The Wake of the Red Witch? Sleeping and making love—with Magwitch and his younger brother, Edwin Drood?

As we near the port of Dejima—the fan-shaped artificial island in the Bay of Nagasaki. The Dutch trading post on the coast—now during Japan’s self-imposed isolation (sakoku). The Edo period—from 1641 until 1853.

I’m even more shameless—and in need of love now. Heaven can wait—but I can’t. I need to be loved—and to make love back. I need to be turned inside-out—and upside-down. I need to get it both ways—with both handsome brothers. I was lucky indeed—to be shanghaied by two such goodlooking young thugs.

Young handsome Magwitch who came back for me—and pouty, sullen Edwin who ended up in love with me too. What was this thing—that had grabbed me up that dark afternoon in the cemetery? What was it that kidnapped me and whisked me far out to sea? The hardness of the high seas—that pulled me deeper and deeper into the deep blue sea of love?

I didn’t know—I didn’t care anymore. I could sail forever and a day anywhere—who cared where or when. It didn’t make any difference to me—anymore anyway. All I needed was my two guardian angels—who sprained my thigh and bruised my lips.

It had all been decided back in the cemetery a long time ago—I didn’t have much of a choice anyway. Getting knocked up—and my head banged hard against a tombstone. I thought I was going to be murdered and die that day—and in many ways that was true. I was fucked to death—and born again anew, my dears.

And so what else could I do—but take each day one lay at a time. Back there in England at the Ratcliff Highway opium den—that’s where I got wised up to the soup du jour of my own personal denouement.

That’s when Magwitch—introduced me to his moody younger brother who hated everybody. He hated me with a passion—and treated me like a no-good fucking slut-whore.

But as the night wore on—Edwin gradually realized that I was into rough trade amour. I craved it—I pleaded for more. And he gave it to me—in sullen spades. Then brutal clubs, pierced hearts and sharp diamonds. Soon he fainted in a royal flush—taking me with him all the way down to Davy’s Locker. Magwitch smiled and nodded—arrogant, better-than-thou Edwin had finally met his match.

And so here we were a year later—my love for Edwin running through me silent and deep. His love hissing at me—like the sea-foam and curling surf sliced by the sharp-edged brow of the ship. Pulling us further and further—out to sea. It was like wrestling again—with an angel.

Except the canvas tent down by the river—had changed to straining canvas sails. And instead of me spraining my thigh—it was handsome lithe Edwin who limped away each time from bed.

The more he limped and gimped—the more I wanted him bad. He was my pouty reluctant angel—my young mermaid stud of the high seas. He smoked like a fiend—and then I’d get him off. How many times—did he blow the back of my head off. Splattering my brains—all over the hull of the ship.

Magwitch had other things to do—planning ahead for our business deals with the Portuguese and Dutch traders. He said there were things in China—that would change my life forever. But in the meantime—I had my hands and limbs and heart full of something else. I was addicted to his younger brother—which is what Magwitch wanted to happen.
I wanted it to last forever. It was like having Magwitch all over again—this time through his kid brother Edwin. I was addicted to young brotherly love—my lips oozed with his liquid family jewels. His Family tree—was a part of me. His muscle-bound branches—his gnarly roots.

I got to know the taste—of the Forbidden Fruit. Edwin was good at it—at stuffing me with it. Biting my neck—and stretching me out in the swaying hammock at night. Bending and twisting me—like a warm stick of cherry licorice.

Magwitch every once in awhile. But he was an important trader—and successful businessman now. As we neared Dejima—he met and made plans with his fellow henchmen aboard ship.
.
While Edwin and I got ready for Japan—by taking another toke and him playing dead. I got pretty good at resurrecting him—like Jonah and the Whale.
Posted by pugetopolis at 7:07 AM