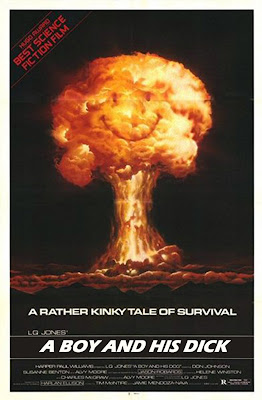 It’s 2012 A.D.—several years after the BP oil spill flooded the Gulf of Mexico and then all the oceans of Earth with putrid, slimy, cruddy, killer crude oil in a terrible Oil Spill Apocalypse.

Levi Johnston plays Vic—one of the young “solo” survivors of the End Times. His goodlooks and cinematic charm are perfect for this sci-fi remake of Harlan Ellison’s violent, sexy and vulgar dystopian black comedy.

So very much like young goodlooking Don Johnson—Levi Johnston plays a new kind of Vic in this post-apocalyptic nightmare movie of the future. Rather than a telepathic dog—Levi talks with his telepathic penis “Dick.”

“Jizzville” is run by the ruthless, cruel Sarah Palin—along with ditzy ex-senator John McSame and mean media queen Matt Drudge. They hook Levi up to an artificial insemination machine that milks Levi constantly day and night. Naturally Levi’s petulant, pouty penis, “Dick”—rebels and leads a revolution that brings down the Jizzville Dicktatorship.

Levi and Bristol escape back to the surface—where Levi and “Dick” decide to do in Bristol and barbecue her. Dick remarks: “She had marvelous judgment—if not particularly good taste.” The boy and his penis laugh at the pun—and walk away into the sunset.

The best part of “A Boy and His Dick” is the wicked repartee—between Levi and Dick. Both have sexual lust for women—but Dick plays coquettish and hard to get.

To satisfy Levi’s constant hunger for sex, Dick makes Levi endure insults, rambling conversation, naïve speculation and martyristic ramblings about how stupid human beings are and how greedy Big Oil was to get the whole planet destroyed and covered with muck.

It’s a black comedy verging on an absurdist play—with a constant undercurrent of snide, sexy innuendo going on between Levi and his Dick. Dick comes across as a vicious, insolent critic of everything that’s stupid and all too human.

Like Ellison’s novella, “A Boy and His Dick” poses as a comedy team—staining the already stained, greasy landscape with blatant misogyny and lots of stupid scavenger chit-chat. TV Guide hates it—but Cinefantastique loves it.

“A Boy and His Dick” is an intriguing vision of Tea Bagger Trouble and Excruciating Exxon Excesses. It’s a crazy world where Dicks are smarter than men—and where post-WWIII Penises run the Planet. Often billed with “Plan 9 From Outer Space” and porno-flick “Top Gun,” ABAHD won an Oscar for Best Special Effects.

Something else that adds realism to the movie’s SF horror—is “Dick” himself or herself or itself. “Dick” is rather polymorphously perverse as the Devil’s Advocate in this flick.

ABAHD is another flick in a long line of films in the “buddy movie” genre. Love and romance is pure and unstained—between a Boy and his Dick. It’s a sublime, not slimy—noble partnership in crime and punishment between a young man and his precocious prick.

Both Don Johnson and Levi Johnston—are favorite actors among gays. Both have boyish naïve charms—and a regular shotgun endowment down there in the Bargain Basement Department.

One doesn’t have to be a Harlan Ellison cultist or a sci-fi Hugo Nebula Award queen—to appreciate this movie. Hollywood Babylon still manages to get a little breathless and weak in the knees—when somebody like Levi Johnston comes along…
Posted by pugetopolis at 5:23 PM