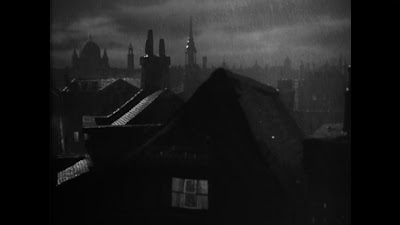 “It was wretched weather,
stormy and wet, a vast
heavy veil had been driving
over London from the East”
—Charles Dickens,
Great Expectations

Yawn, my dear. Ho-hum and all that. It was another one of those dreary, tiresome “dark and stormy nights.” And you know what usually happens—during those moody, dark, stormy nights don't you?

What usually happens to me (I don’t know about you)—is that something terribly frightening and yet amazingly insightful seems to come out of the blue and scares the shit out of me. Like that time in the churchyard cemetery—when tall, dark, handsome Magwitch the thug loomed out of the grim swamp dead of night twilight and grabbed hold of me.

And yet… and yet how did I know that something strange and provocative, perhaps even somewhat penisly piquant was going to happen that fateful stormy evening? I was about as psychic as a bump on a log. I'd bite my fingernails nervously and hide under the bed with my cat.

It was the same kind of chilly expectation that filled me that strange night in the cemetery—when I quite by accident fell head over heels in love with a handsome young moody stranger. A young muscular convict on the run—a rough and tumble escapee from the nearby prison. A young desperate hoodlum type—in his early twenties. Who took a liking to me—just as much as I took pity upon him.

It was pouring cats and dogs outside that night—and if one could slowly fly down over the slick, glistening London rooftops beneath that stormy, devilish downpour, gliding over the drenched old buildings with leaning chimneys, stinking coal smoke morosely oozing out from the hovels and swanky brownstones here and there—one might possibly spy the rooftop window of our new little comphy apartment that rainy, troublesome night.

Our new well-appointed bachelor’s apartment—that Herbert and I now lived in quite elegantly. Enjoying my new extremely-generous allowance—now that I was a young twenty-one year old man of great expectations.

Not that I had any great expectations for myself—or even any small ones. The most important thing was London itself, that huge bustling Evil Garden of Eden metropolis with all its various and sundry sins and sad sorrows, all its various cosmopolitan adventures, delicious cruisings, cumly comings and goings.

If one had money, of course—that was the main thing. Which I did possess thanks to my unknown benefactor—so that the City was more than willing to let herself be opened up, embracing me in her arms with pleasure and spreading out the red carpet for such a pair of young bon vivant nelly queens as Herbert and me. For indeed we were gay and debonair—especially Herbert who already knew all the ins & outs of the Pleasure Dome of Madame Kukla, Fran and Ollie.

Soon I grew accustomed to getting my own way—and soon I had a coterie of masseurs, manicurists, Bridge partners, young male prostitutes, queenly tavern intelligentsia of great knowing and forbidden knowledge which they were only too ready to share with me—for a price. Rather than feeling burdened by such an ungainly entourage of silly sycophants—I actually felt buoyed and uplifted by all their coy flattery and appeals to my vanity. They were so different than Estella with her negative, nigardly, no-nonsense scoldings and put-downs.

So that after awhile, I began to believe everything they said—and I got spoiled rotten, getting peeved if they didn’t live up to my gay expectations. Usually I had to up the ante to buy some more of their precious flattering nonsense. I'd become so addicted to them making me feel so superior and gay. I paid my manicurists especially well—since I never ever wanted to look upon those same coarse, rough hands and dirty fingernails I forever associated with the crudity of being an ironsmith’s lowly apprentice.

Not only spoiled, addicted and uppity—not only vain, snotty and unforgiving. It got much worse than that—especially when it came to love. I bought love like fresh fruit at Covent Gardens—I threw it away as one discards an apple core or the pealed skin of a grape into the garbage. I would’ve partied, drunk more wine and not slept at all—if it hadn't been for Herbert’s protective, solicitous ways. He came from a fairly well-to-do family and was much more naturally gay than me. There was still within me the resentful Bad Seeds of yesterday—after years of being a nervous orphan all alone and growing up poor down by the sea, the river and the lonely moors.

Mr. Jaggers called me into this legal offices one day—and scolded me for being such a spendthrift with my life and finances. But then he shrugged for some reason and upped my allowance some more—suggesting that I was to expect a visitor soon. My benefactor. There was a hanging going on outside the window—down in the crowded courtyard where they hanged people in debt and those who couldn’t pay to live any longer.
.
The crowds cheered—as the dangling feet twitched and danced. It captured my attention completely—heaven forbid I’d ever end up that way. Dancing the jig—from a tight, straining rope!!! Mr. Jaggers just shook his head at me. "It happens everyday, my good boy. Now run along, I've got business to attend to."

I’d lived in London now for quite some time—and even though I was now twenty-one, I still didn’t know who I was or what I wanted to be. I still was totally in the dark—about who my gracious Benefactor was.
.
I’d always assumed it was rich, witty Miss Havisham—who’d taken a liking to me for some strange reason. But now Estella was off to the Continent—being taught the cultured ways of a lady of Parisian high culture. It seemed to me that both Estella and I—surely were Miss Havisham’s most tender favorites. Did both Miss Havisham and Estella still harbor ill feelings about me—wanting to see my heart broken? And my gay great expectations dimmed like theirs?

Yes, I knew Miss Havisham was too old and ill to travel to London or Paris—after all I’d wheeled her around in a wheelchair toward the end of my stay with her. I’d always thought that she was my generous Benefactor—and that she’d sent both spoiled Estella and yet-to-be spoiled me to the City for both of us to become who’d we become. Selfish little City Mice to be or not to be caught, tortured and played with by some cosmopolitan creepy Cheshire Cat with a nefarious grin and sharp hungry teeth.

And so there I was at home all alone—while Herbert was entertaining some friends at the Black Cat Cafe. He wasn’t spoiled one bit—in fact he preferred to moil and mingle with the rowdy young sailors and Rough Trade crowd. He had a certain weakness for young sailors just in from the sea—ones that needed it badly right away and were willing to be had if the right price was paid.

Herbert had connections with all the denizens of the East End lowlife opium dens—and would disappear for days and nights when a ship would come in from Canton or Hong Kong. It’s not hard to imagine Herbert lounging about—down by the docks and Limehouse District cruising for you know what. Nor is it hard to imagine Herbert fondly admiring the exquisite obscene tattoes on various bulging young biceps of brooding nude rude sailorboyz—stoned out of their minds in those opium-drenched dens of inequity and pits of danger and debauchery.

Herbert was discrete though—he’d never drag home his young sailorboy tricks or hustler riffraff. He’d always leave all that opium-induced sordidness and debauchery behind him—back there in the dark dimly-lit rooms littered with the sad wreckage of wasted, shipwrecked youths gone bad.
.
There's nothing more exquisite than a gone ravished cross-eyed Rimbaud losing it completely in some dark room full of famished admirers and Transylvanian vampires sucking away. Or better yet some young pale hung wiggling Billy Budd type being hauled up to the forecastle and then dropped all the way down to the deck, getting off one last awful spaztic time in front of some ogling voyeuristic crew.
.
Sometimes Herbert got so loaded himself—that it was impossible for him to even crawl outta bed sometimes. And so I had long weekends to myself or I'd end up having to send a cab to pick poor Herbert up at some East End dive. But on this particular cold rainy night, I was alone and waiting for something strange to happen. I sensed it and it did happen...
Posted by pugetopolis at 11:37 PM