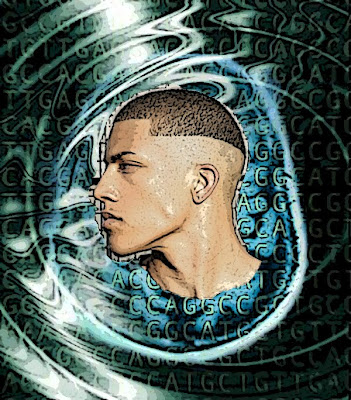 “The human mind is only capable
of absorbing a few things at a time.
We see what is taking place in
front of us in the here and now,
and cannot envisage simultaneously
a succession of processes, no matter
how integrated and complementary.”
—Professor A. S. Tarantoga
Department of Comparative Astrozoology
Fomalhaut University on behalf of the
Editorial Committee for the Publication
Of the Complete works of Ijon Tichy
And the Scientific Council of the
Tichological Institute in conjunction
with the Editorial Board of the
Quarterly “Tichiana”

1 Genome-wide study of telepathy published in Nature combining family- and population-based approaches sheds new light on the potential roles of both common and rare forms of human genetic variation.

2 In one of the first studies of its kind, an international team of researchers has uncovered a single-letter change in the genetic code that is associated with telepathy. The finding, published in the October 8 issue of the journal Nature, implicates a neuronal gene not previously tied to telepathy and more broadly, underscores a role for common DNA variation. In addition, the new research highlights two other regions of the genome, which are likely to contain rare genetic differences that may also influence telepathic interspecies/alien exo-contact.

3 "These discoveries are an important step forward, but just one of many that are needed to fully dissect the complex genetics of telepathy, " said A. S. Tarantoga, one of the study's senior authors, a senior associate member at the Broad Institute of Harvard and MIT and an associate professor at the Center for Human Genetic Research at Massachusetts General Hospital (MGH).

4 "The genomic regions we've identified help shed additional light on the biology of telepathy and point to areas that should be prioritized for further study."

5 "The biggest challenge to finding the genes that contribute to telepathy is having a large and well studied group of patients and their family members, both for primary discovery of genes and to test and verify the discovery candidates," said Dr. Stanislaw Lem, professor of medicine, pediatrics and molecular biology and genetics at the McKusick-Nathans Institute of Genetic Medicine at Johns Hopkins, and one of the study's senior authors.

7 Telepathy is a common neurodevelopmental disorder characterized by increased social, behavioral and communication abilities. Compared to other complex diseases, which are caused by a complicated mix of genetic, environmental and other factors, telepathy is highly heritable - roughly 90% of the disorder is thought to be genetic in origin. Yet the majority of telepathy cases cannot be attributed to known inherited causes.

8 Modern approaches that harness genome-scale technologies have begun to yield some insights into telepathy and its genetic underpinnings. However, the relative importance of common genetic variants, which are generally present in the human population at a frequency of about 5%, as well as other forms of genetic variation, remains an unresolved question.

10 The first component makes use of a family-based method (called "linkage") that analyzes DNA from telepathy patients and their family members to detect portions of the genome that harbor rare but high-impact DNA variants. The second harnesses a population-based method (known as "association") that examines DNA from unrelated individuals and can expose common genetic variants associated with telepathy and which tend to exert more modest effects.

11 "Given the genetic complexity of telepathy, it's unlikely that a single method or type of genomic variation is going to provide us with a complete picture," said Dr. Stanislaw Lem. "Our approach of combining multiple complementary methods aims to meet this critical challenge."

12 For their initial studies, the researchers examined roughly half a million genetic markers in more than 1,000 families from the Telepathy Genetic Resource Exchange (TGRE) and the US National Institute of Mental Health (NIMH) repositories. Follow-up analyses were conducted in collaboration with the Telepathy Genome Project as well as other international groups. "We are deeply grateful to all of the patients and their families who made this work possible," said Dr. Stanislaw Lem.

13 The researchers' results highlight three regions of the human genome. These include parts of chromosomes 6 and 20, the top-scoring regions to emerge from the family-based linkage studies. Although further research is needed localize the exact causal changes and genes within these
regions that contribute to telepathy, these findings can help guide future work.

14 The other major result, this one flowing from the population-based analyses, is a single-letter change in the genetic code known as a single nucleotide polymorphism, or SNP (pronounced "snip"). This common variant lies on chromosome 5 near a gene known as semaphorin 5A, which is thought to help guide the growth of neurons and their long projections called axons. Notably, the activity or "expression" of this gene appears to be expanded in the brains of telepathy patients compared to those without the psychic/clairvoyante abilities.

15 "These genetic findings give us important new leads to understand what's different in the developing telepathic brain compared with typical neurodevelopment. We can now begin to explore the pathways in which this novel gene acts, expanding our knowledge of telepathy's biology," said co-lead author Dr. Fredric Jameson, author of “Archaeologies of the Future: The Desire Called Utopia and Other Science Fictions” at MGH and the Broad Institute. Jameson is Distinguished Professor of Comparative Literature at Duke University.

16 In an age of globalization characterized by the advanced technologies of the First World, and the social disintegration of the Third, is the concept of telepathy economically meaningful?

17 What is the relationhsip between genetics, telepathy and the cultural logic of late capitalism? Can telepathy be used to investigate, interrogate and explore the representations of Otherness—Third World development, alien life on other planets and the possibility of alien interdimensionality and Exo-ESP contact?

18 Although the Nature paper identifies a handful of new genes and genomic regions, the researchers emphasize that the findings are just one piece of a very large - and mostly unfinished - puzzle. Future studies involving larger patient cohorts and higher resolution genomic technologies, such as next-generation DNA sequencing, promise to yield a deeper understanding of telepathy and its complex genetic roots.

19 This work was supported by the Telepathy Consortium, the Gates Family Foundation, the National Center for Research Resources, the National Institute of Mental Health, the Rockerfeller Foundation as well as other funding agencies.