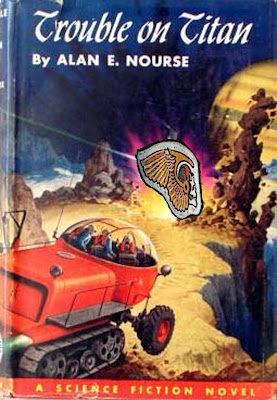 “It had been a bad night,
and when he tried to drive
home he had a terrible
argument with his car.”
—Philip K. Dick, The Game-
Players of Titan

The vidscreens were busy with imperial gossip.

The Venusian ambassador was in a tizzy.

“Those tacky Vandals of the Void!!! They’re just ruining my visit to Saturn’s Rings. I don’t know how many times this seems to happen to me. You’d think they’d never seen a transvestite imperial ambassador before. Such crude barbarians…”

The vidscreens were sizzling with the news—it was just a minor interplanetary spat. A minor Tempest in a Titan Teapot…

And yet all the queenly Beltway Bureaucrats in waiting back on Earth were getting terribly upset again—those Ort Cloud gangs and Asteroid Hell’s Angels were just getting simply insufferable lately.

Those butch Vandals of the Void had no diplomatic finesse at all—they didn’t possess even a mere smidgen of decent respect for corporate protocol and Imperial Pepsi precedence.

Her distinguished Planetariness the Venusian ambassador was stuck now way out here in the dreadful Saturnian sticks—on some insufferable Ganymedian foreign outpost out in the middle of nowhere!!!

“Well, get her,” sighed the young Terran lieutenant—a rather stunningly goodlooking bodyguard officer from the contingent of Space Marines assigned to escorting the comings and goings of the various queens and minor princes from the Terran Imperial Court.

Sergeant Jones of the Imperial Sardaukar “Have Spacesuit Will Travel” special commando unit of the Titan Planetary Corporation nodded knowingly in agreement with the effete Lieutenant Flash Gonad—as they both took a break from all the hectic hubbub surrounding the latest queenly flap at the Titan Spaceport.

Passengers were coming and going as usual—just then, for example, a still young looking and extremely vibrant Arnold Schwarzenegger was passing through the inspection shields like in that old skin-flick Total Recall. The retired governor now the Secretary of Space—was simply exhausted after his travails campaigning as Governor Sarah Palin’s running-mate in the latest imperial election back on Terra. He had the time to wink at cute Sergeant Jones though…

Lieutenant Flash wasn’t supposed to be mixing—with local noncommissioned space marines like young Sergeant Jones. But nevertheless he liked to schmooze—with the handsome muscular marine with his smart buzz-cut haircut and smooth smile. Those space marines were all so very butchy—and still somewhat untainted by the usual AC/DC decadence.

After all, young Marines like Jones were descendents of the Imperial Sardaukar—the soldier-fanatics loyal to the Padishah Emperors of House Corrino who’d ruled the Known Universe (the Imperium) for over 10,000 years until the events of the first Galactic Watergate Scandal.

According to the LA Las Vegas Padishah networks, the recent local collapse of the Asteroid Hell’s Angels hegemony had created a toxic environment that had the whole solar system on the verge of a biker war.

A spokesperson for VLADIMIR HARKONNEN, commonly referred to as Baron Harkonnen whose title was officially Siridar (Saturnian governor) Baron—explained in detail why TPTB believed the relative calm of the past few months was about to be broken. Including evidence of gang members stockpiling weapons in preparation—to take out their rival "by any means necessary."

Imperial Sardaukar guards say every member of the Asimov Crew—the Asteroid Hell’s Angels’ so-called "puppet club"—has escaped into the Ort Cloud Void. While only a handful of Asteroid Hells Angels are being held captive—in suspended animation Deep Freeze in secret Guacamole Bay seclusion site way out there on cold faraway Pluto where they most certainly belong to freeze to death forever!!! With the demand for Spice as high as ever—the criminal underworld on Titan has been thrown into turmoil.

“Those Imperial Sardaukar are such swishy swine,” complained the Guild Navigator worms writhing in their tanks of spice gas. They were the ones most worried by this latest little douchebag spat—since they depended on extremely huge aerosolized dosages of the Spice inhalant as a mutagen for their practice as Guild Navigators. They were going into withdrawal.

On the other hand, the space worms had their Beltway detractors and Terran imperial critics—like digusted Lieutenant Flash and the all the other Imperial courtesians back in the Potomac Pothole.

Lieutenant Flash leaned closer and squeezed Sergeant Jones’ bulging biceps rather too knowingly and salacously. Sergeant Jones looked around quickly—making sure there were no Imperial Sardaukar DADT spies hanging around. He reached for his blaster-gun—and snarled like a German Sheperd at the nervous inopportune gay lieutenant. Rough trade vibes—slithered up and down his sleek Venus-torso. It turned on the louche Lieutenant—immensely.

The Navigators of the Spacing Guild—depended upon Mélange for the heightened awareness and the prescient ability to see safe wormholes through space-time. This allowed them to navigate the gigantic Guild Shell-Exxon-Chevron-BP-ConocoPHillips-Occidental-XTO-Suncor heighliners between planets and star systems.

The Navigators were rumored to be mutated Beltway Lobbyists—who enjoyed being the center of power and attention. Mélange gave these Worm Men a longer life span, greater vitality and heightened lobbyist skills. Without these prescience-enhanced Lobbyist Worms—interplanetary and interstellar Travel & Commerce would not be possible. Mélange came with a steep price, however—it was addictive and withdrawal was fatal.

Not without reason was the spice called—"the Secret Coinage” of Imperial Commerce. Without Mélange, the Spacing Guild's heighliners couldn’t move an inch. Mélange precipitated the "navigation trance"—by which Translight Pathways could be "seen" before being traveled through.

Without Mélange and its amplification of the human immunogenic eidetic imagining system—life expectancy for the very rich Lobbyists would degenerate rather quickly. They’d be reduced to mere wheeling and dealing in the Beltway—letting themselves be bought off by the highest bidder. And then in turn, selling their Masters—to the rubes and minions of the Milky Way Express. Even the vast middle class of the Imperium—drank diluted Mélange in small squirtlings with at least one or two cocktails or highballs each starry night.

Even the Bene Gesserit queens and Fremen riffraff used the stuff—for their clairvoyant and precognitive trances. Accessing archetypal genetic memories like Miss Proust—and heightening their precog powers with Monsters of the Id entertainments.

But it was a poison—even the Asteroid Hell’s Angels and Uranian Bikers knew that. The problem was, though—that once you got addicted to the spice, there was no turning back. It was a poison—so subtle, so insidious . . . so irreversible. Eventually you’d end up—looking like the Worms. Locked inside a tank of Mélange gas—all dressed up and nobody to blow.

"The Uranian Bikers have been attempting to establish a foothold—in the Imperial Province of Metaluna due to the sudden hubbub of PUSH. Members of the Uranian Bikers had been capitalizing on the fact—that the Asteroid Hell’s Angels members and supporters are playing low-profile around the solar system—not 'flying' their colors throughout the Imperial City of Poughkeepsie, not wanting to enrage members of the Mars-Manitoba Hells Angels," the Las Vegas High Times reported in a recent vidscreen story.

The Uranian Bikers had a long history with the Hell’s Angels in the Regulus-Quebec sector of the Known Galaxy—especially during the 2090s, when dozens of Star Fleet and Imperial Sardaukar newly arrived Nexus droid gang members were killed. But they were new to Winnipeg and Topeka…

The Asteroid Hell’s Angels responded quickly—despite their diminished state, according to our sources. Two long-time members of the gang assembled a new group in January to stand up to Uranian Biker members Mélange monopoly.

The "Leather Queens Rough Trade Support Crew" was comprised entirely of imposing handsome butchy unemployed bored young men—who were free in the community and had previously shown their allegiance to the Asteroid Hell]s Angels—at least informally behind closed garage doors in bed.

The Leather Queens Rough Trade Support Crew made their first big impression in mid-January—when they allegedly attacked a Uranian Biker member who’d been lured to a backroom of some dumpy auto repair shop that had connections to the Hells Angels. It wasn’t pretty—what they did to him. A bootleg snuff version won the Academy Awards back on Terra—for best CGI special effects. What the Hollywood audience didn’t realize was—all the exquisite special effects were all, well, au naturel.
.
The Imperial Sardaukar soldier-fanatics had been loyal to the Padishah Emperors of House Corrino— who’ve ruled the Known Universe (the Imperium) for over 10,000 years. At least until Miss Frances Herbert—started leaking the shocking events of the futural past in his first space opera novel, Dune. Shame on her—getting that Space Opera jive going again. Van Vogt must be turning in his grave—along with all the aging Baby Boomers of Lord Campbell’s Astounding Fantasy and Science Fiction golden days.
.
The key to the Dune Space Opera and the Imperial throne, as any dummy Terran dimwit knows—is of course the Sardaukar Troops, the foremost soldiers in the Known Universe and feared by all the cringing inhabitants in the Pulp Fiction Planet itself.
.
As we all know, my dears, all the various and sundry sci-fi writers from Miss Heinlein all the way to Dictator Disch—they’ve all been secretly trained on the devastated Salusa Secundus the Imperial Prison Planet. The harsh literary critic conditions there—ensured that only the strongest and most "ferocious" sci-fi writers survived.
.
It is noted of Salusa and that despised training planetoid dump of Camp Concentration—that the mortality rate among sci-fi writers is higher than sixty per cent. Sardaukar training emphasizes— ruthlessness, near-suicidal disregard for personal safety, and the use of cruelty as a standard weapon in order to weaken readers with fear and loathing as well as fantasy horror heebie-jeebies.
.
In Dune, a Sardaukar Author sneers at Dr. Yueh's mere mention of the word "pity." Of the elite sci-fi cognoscenti, it is noted that "The commonest Sardaukar author lives a life, in many respects, as exalted as that of any member of a Great House. Their uniforms are described as gray with silver and gold trim. Although they’ve been known—to dress in rags and live in garrets. Biding their time—until now.
.
One small point—for those of you trained in the esteemed and uppity Bene Gesserit weirding way. There are many machines on Ix—new machines. You betcha, kimosabe. Better than those—on Richese. But not as good as those on Titan.

I’m simply a very minor unimportant Third-Stage Guild Navigator—youngest son of the Emperor Shaddam IV. I am not here—I did not say what I said.

Posted by pugetopolis at 2:06 PM