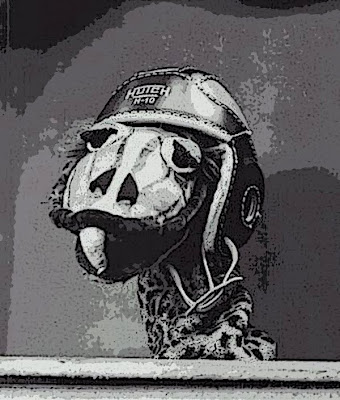 On a somewhat lighter note (speaking of “troubled, angst-filled, young chickenhood”)—I knew this hippie kid back in the early ‘70s who was probably one of the must unique-looking young men I’d ever known.

I was living on Whidbey Island up by the San Juan Islands—north of Seattle back then. I was renting a beachside shack on the northern side of the island—near Coupeville across the Saratoga Passage from Camano Island. I had a sailboat a friend had let me use for the summer—and it was a nice way to lollygag and do nothing at all except enjoy life and the hippie pursuit of happiness.

This kid, Kenny, was from east of the mountains. His parents were serious, workaholic wheat farmers near Yakima—and they’d thrown him out because he was totally lazy, smoking dope all the time and was a school dropout too. They’d sent him to live with his grandparents on Whidbey Island—to hopefully get his trip together.

I lived down by the water in a little beach-shack I rented—while Kenny lived with his grandparents in this huge mansion up on the cliff. They were retired by then and pretty laid-back. It was hoped they’d help Kenny—through his “troubled chicken” period.

They were pretty old—and not feeling well. His grandmother had suffered a stroke—and she couldn’t talk anymore. She was like a ventriloquist—without a puppet to say things for her. His grandfather piddled around Whidbey Island in his Chevy pickup—his schoolteacher daughter lived not far away and she had some kids too. It was an idyllic Shangri-La—those Pacific Northwest hippie days and nights…

Well, the thing about Kenny was that—he reminded me so very much of that strange dragon-like cartoon-character outta “The Kukla, Fran and Ollie Show” from those early days of naïve wholesome all-American family TV entertainment.

I confess I didn’t watch TV back then much or even now anymore—but back in the ‘50s I was somewhat of sci-fi fan of Captain Video and his Video Rangers along with Tom Corbett and his Space Cadets stuff on the tube:

It seems very campy and nostalgically-outdated now—but that’s another story. This kid Kenny reminded me more of that funky goofy long-necked “Ollie the Dragon.” For some reason that goofy puppet-show stands out in my memory—more than Captain Video or Tom Corbett.

I guess Orson Welles, John Steinbeck, Tallulah Bankhead and Adlai Stevenson were among the show’s many adult fans back then. Maybe there was something sophisticated—that I missed. There were other comical puppet characters on the show—like Kukla, Ollie, Madame Ooglepuss, Buelah the Witch, Fletcher Rabbit, Cecil Bill and other Kuklapolitans.

But for some strange phantasmagorical reason—maybe it was the weed—this kid Kenny reminded me so very much of the “Oliver Jethro Dragon III” character. Maybe it was his long gangly neck—maybe it was his low baritone voice that kept breaking and jumping up to soprano?

Maybe it was because—he could be both shy and impetuous at the same time? He had many awkward sides to his personality—sometimes he was a different person from day to day.

Regardless of all that—he had nothing else to do all summer long, so he hung around down by my beach-house and helped me with my boat. He was actually a pretty good sailor and much better boatman than me—I don’t know why. Maybe because he was from east of the mountains—and was used to vast seas of flowing Cascadian wheat. He had a thatch of long dirty blond-yellow hair—a real mop of it like everybody had back then.

I called him “Ollie”—because he was so goofy and funny all the time. Like Ollie the Dragon—the funniest of all the Kuklapolitan Players. His long neck and lanky body—gave him the appearance of a young chicken dragon on the loose. Mostly he wore cut-offs—out in the boat. We swam nude sailing out in Saratoga Passage all day long—I got used to every lanky gangly naked inch of him. And then some…

Actually he was more civilized and discrete about things—than I was. I got carried away—I fell in head over heels in love with him. All the way—and then some… What can I say—about back then?
.
GUZZLING HOURS ELAPSE!!!—“That was delicious!!!”

“Do you always slurp down—three ice cream sodas at one sitting?” he’d ask.

”I once devoured a whole Dairy Queen,” I told him. “Back in the U-District with Jommy...”

”Didn’t it kinda bruise your tonsils a little bit, huh?”

He’d laugh indignantly—stretching out on the deck of the boat. I had to weigh each word carefully—my tongue was sprained so bad. I could barely talk—it was so embarrassing. I gulped and gulped—I must have looked like a fish out of water—with my big obscenely ogling eyeballs.

I know I should’ve been ashamed of myself—confessing this all these now years later should make me blush full of sincerest regret and remorse. I wasn’t a very good influence on Kenny—but I couldn’t help it. I’d never known such chicken dragonhood—and such shameless JD exhibitionism. The more he said “No”—the more I said “Yes.” Who needed a keel and anchor deep—when I had Kenny around to keep me company?

You’ve probably heard of—Ray Milland and “The Lost Weekend?” Well, with me—it was “Kenny and The Lost Summer.” His grandparents were happy—he’d found such a good friend like me down in the shack by the beach. They were so glad I got him out of trouble—they didn’t charge me any rent that whole summer.

Kenny didn’t need any slithery scales—or hot fire-breathing dragon breath. I was the one breathing hard all the time—I was the one slinking around thinking about him day and night. He must have grown six inches during the summer—his lovely long lanky veiny neck stretching out further and further. It must have got a mile long—the way he wrapped it around the edge of the bed…

Things got rather mythical fast. Seeing him swimming nude off the dock or back-stroking by the sailboat at twilight—was like gazing at sleek streamlined dragondom swimming the Hellespont. The column of steam that went up was so huge—it was seen miles away on Camano Island. I can't mention how many creamy ice cream sodas—he let me have that long lost summer. Kukla and Fran surely would’ve been green with jealousy—how I glutted myself that whole long summer long.

Eventually Kenny finally got it all out of his system—all that troublesome teenage testosterone. All that anguishing adolescent angst—and charming noisome assholehood. He ended up back east of the Cascades again—dutifully getting married, having kids and settling down. He became—the epitome of unfailing trustworthy straight Fatherhood.

His relieved parents were overjoyed and so very pleased—what wonderful grandparents Kenny had back on Whidbey Island. Such wonderful Love—to finally bring him around to responsible adulthood and getting his shit together. It was truly a wise choice and decision—to have Kenny spend that summer on Whidbey. I couldn’t have—agreed more.
Posted by pugetopolis at 1:08 AM