The Death of Van Vogt 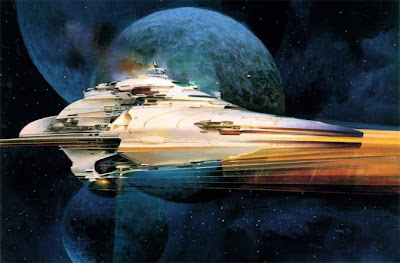 The Death of Van Vogt

“The Null-A filled
the emptiness and it
became the Universe.”
—Herman Broch,
The Death of Virgil

The plot of dying itself—in the sense that it’s a sci-fi story—about a man who feels the most significant thing of his life approaching & fears that he will miss it . . .

Steel-blue starlight—smoothed out by a soft, scarcely perceptible solar-wind, the rings of Saturn streaming by the imperial squadron as it steers toward the spaceport of Brundisium, the golden plains of the Saturnian coast coming slowly nearer to the ships.

The deadly loneliness—of deep-space submersion changing with the ubiquitous circling ancient ringed disk, merry-go-rounding above the breakwaters of the huge mirror-smooth blue-green mother-of-pearl planet, spread under the calm open shell of heaven.

The seven deep-space vessels—slowing down, following each other, keels in line, the first and last, both sleek atomic shield-powered pentaremes, swift starships of the war-fleet—the other five deep-shift heavy cruisers, imposing rakish decaremes and duodecaremes, ornate deep-space streamlined starships of the Augustan imperial rank, with a complement of 20,000 legionaries and star troopers.

The middle one, ostentatiously sumptuous, its smooth titanium-mounted gilded fins, the ring-nose dragon’s head under the railing, radar-screens wired nervously, scanning for intruders and Ort pirates, the purple aura of its defense screens shimmering, the sleek eagle herald of the galactic Caesar.

On that ship was the death signet, creasing the brow of A.E. van Vogt, prey to space-sickness, taut with the lingering threat of free-floating, space opera fatigue, slowly becoming conscious of himself once more, his Alzheimer brain readjusting to the calm sullen regions of the inner solar system again.

Van Vogt lay there in the pearly spice-gas fog of his space-navigator fish bowl—a tank a mélange-gas giving the dying writer the illusion of returning home to the omnipresent inscrutable dirge of droid-death, the end his halcyon Hugo-winning dayz of wine and roses.

Now, however, bound to an anti-grav hammock below deck—set up for him amidship, he becomes conscious of himself or rather his body becomes aware enough to claim him once again as its own, the bitter aftertaste of grueling time-warp nostalgia, retouching his fading memory, returning him once again to Earth—that free-falling quiet-guiding fatigue palace known as home, despite his plaguing cough, the usual evening fever and anxiety.

After all, was he not the Slan Virgil—the telepathic Null-A queen bee, the Wizard of Linn, Son of the Empire of the Atom, the Black Destroyer of the Golden Age, the mutant author-king of Astounding Science Fiction and Fantasy?

The endless space operas, the planetary alliances, the global wars, the atomic gods, the ancient machines lost now, found once again—was it not he van Vogt who stumbled onto the Pulp Fiction secret, the Lost Knowledge of Ace paperback novels, the mystery and wonder of Golden Age of Sci-Fi!!!

And yet there was not much time left—already his invisible, subterranean, painful, backward journey was deflecting itself more and more, overshadowing the heavy creak of the oar-locks and the pulling, restless Titan tides below them, as the imperial fleet coasted slowly by, resisting the ancient, stoic, gravity pull of the surging Rings of Saturn.

Van Vogt could feel himself—being pulled back in time, back through his various wolfish, foxish, cattish, parrottish, horsish, sharkish self-imposed, smoldering Ovidian heteronyms, sullen, all-cleaving time-waves washing over the deck, carrying the beat of oars down into his cabin, inescapably, unavoidably, as the ship made its way deeper into the Heart of Planetary Darkness.

The vast starship lapped by stellar whitecaps, robotic pilots slowing down past the speed of light, sliding back to Virgil, each steady hundredfold stroke of the guild navigator’s intuitive radar screen, past the ash-strewn asteroid-surfing coastline down below, slipping beneath the star-damp, star-draughty, streaming hull of the ship, sprayed with slick wet neutrinos, coated with the thick undertow of black matter.

Van Vogt could hear the ship groan, his hammock swaying below deck, the two star-guard destroyer ships cruising close-by, escorting him for the last time, back to his forbidden sci-fi boyhood home, the touchy, tentacle-troubled world of young Jommy Cross—the Slan kid out of time.