Not of This Earth 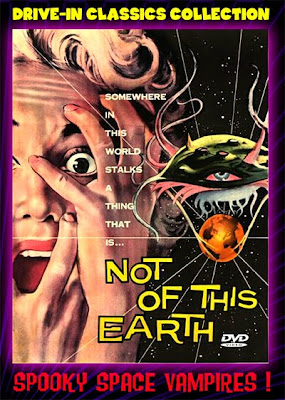 I dunno—I just can’t help it. He turns me on… There’s something about Paul Birch—the way he plays the cool aloof alien in Not of This Earth.

Is it his black suit? His sunglasses? His stark milky-white contact lens? When he takes off his glasses—he fries your brains.

Talk about film noir badguy—he’s like some dark moody gangster form outer space. He’s like The Man With the X-Ray Eyes—he can zap right through you.

Actually Birch is an alien agent—from the distant planet Davana sent to earth via a high-tech matter transporter. He ends up in a fancy mansion in LA—and proceeds to terrorize Southern California in an attempt to acquire blood for his dying race.

What makes this movie sci-fi noir—is its stark black and white depressing realism like so many of the noir classics of the Fifties. The added twist of skanky alien skullduggery—makes this movie more than an otherwise would-be so-so clone of House on Haunted Hill flick along the lines of campy Vincent Price. It's got to be the deadpan down-played realism of Paul Birch’s grim neo-noir grimaces and alien demeanor. His aloof resigned superior attitude toward tacky Terran La La Land...

I first saw it during a depressing visit with my divorced father down in New Mexico. I remember seeing two Paul Birch movies that depressed me beyond tears. The first was Day the World Ended (1955)—another Roger Corman sci-fi classic with Richard Denning, Mike Connors, Lori Nelson, Birch and last but not least the fabulous Las Vegas nightclub singer Ruby played by Adele Jergens.

The strange evil otherworldly "mutant" gets played by Richard Nixon—and the radioactively "contaminated man" is none other than Jonathan Haze who plays Jeremy the cute young gangster chauffeur who drives Paul Birch around LA in Not of This Earth. I watched it again for old time’s sake—recently on Youtube. I couldn’t help but fall into a mood of, well—dizzy déjà vu denouement and touching teenage noir sci-fi nostalgia.

Speaking of fabulous Las Vegas torch-song nightclub ladies of the night—the other movie I got to watch during my grim depressing visit in New Mexico starred another fabulous Hollywood beauty.

It was none other than Zsa Zsa Gabor—the magnificent Queen of Outer Space (1958)!!! It’s funny and kind of ironic—how Paul Birch pops up when you least expect him.

Anyway, there were other film noir movies that Birch would miraculously materialize in—to lighten up my otherwise crummy teenage existence. I especially liked his mysterious role in William “Closet Case” Inge’s Dark at the Top of the Stairs (1960)—a moody noir flick about a strange creature who lived in a dark closet upstairs in a Midwest dreary home for truant juvenile delinquents. It was drunk all the time—and was a magnet for all the crime, corruption and sexual deviancy in Topeka, Kansas. I know—I was there!!!

How could one forget the classic sci-fi noir flick—The Beast with a Million Eyes (1955). It was the story of my life back then—ogling at all the cute numbers in the showers after gym at Blow Job Junior High!!! Talk about a crummy, little pimply-faced Beast with a Million Ogling Eyeballs—that was me. It got me into a lot of trouble as a basket-boy—with some stunningly well-hung butchy classmates getting me to suddenly realize who I really was.

And that scandalous episode of 77 Sunset Strip—as the flamboyant gay Zachary Latimer in “Violence for Your Furs.” That marvelous episode—led me into a life of troubling transvestite drag and destitution. Word got around—I kept getting phone calls late at night on weekends. I loved it when those Johnny Rocco bad boyz in my hometown—treated me roughly like Claire Trevor who played “Gaye Dawn” in Key Largo (1948).
.
I won an Oscar for Best Supporting Actress in our BJ High production of Key Largo—playing the role of a washed-up has-been singer, draped in angora and singing “Key Largo” for a Coors six-pack. I was desperate back then during those nasty film-noir nights at the Snake Pit Drive-In. I’d do just about anything to get what I needed so badly—those awful backseat butchy Johnny Rocco types certainly had my number. It was Dial M for Murder…every long lost weekend.

Birch was always starring in weird Westerns—like that strange episode in Have Gun—Will Travel entitled "The Hanging of Well-Hung Roy Carter" aka "The Big C." The list goes on and on—like “Path of the Serpent” in an episode in Wagon Train. And another gay episode entitled “The Lita Foladaire Story” about something unspeakably divine...

And thirteen episodes of The Fugitive—including “Never Wave Goodbye,” “Somebody to Forget” and “Escape into the Back Room.” Plus the usual Science Fiction Theater episodes like “Conversation with a Naked Ape,” “The Strange Queer People of Pecos” and “Survival on Sunset Boulevard.”

Along with the usual cowboy space operas—like Cattle Queen of Montana, Blow Job at Diablo, Romancing Hopalong Cassidy and The Lonely Lone Ranger.

It's hard to believe—Birch squeezed in all those schlocky movies and tacky TV episodes into just 57 years. He was such a handsome, stocky, barrel-chested man—gifted with a resonant baritone dramatic voice. A veteran of 39 movies, 50 stage dramas and an untold number of TV stinkers including Hallmark of Fame. He achieved star billing with many of Roger Corman’s Grade-B hysterically campy horror movies—especially with this one, one of his best-remembered sci-fi noir films Not of This Earth. 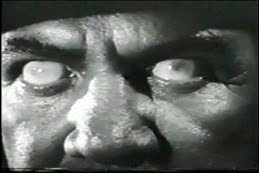