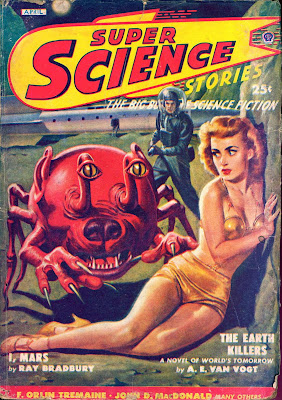 “My book 334 has an ambitious,
conscious, formal structure. The
last part of it has a three dimen-
sional grid system which relates
to and orders all the elements in
the last novella of the book. But
I just couldn't resist putting the
diagram into the book anyhow.
It's meant to be a Friday's foot-
print on the sand. Nobody has
ever taken up that particular
element of the book; no one
has ever pointed to what it
does or what it represents.”
—Thomas Disch, “Disching It
Out: An Interview with Thomas
Disch,” Joseph Francavilla,
Science Fiction Studies #29,
Vol 10, Part 1, March 1983

It was just awful.

The recruiting office was a filthy dump—stuck in a back alley behind The Black Cat, a rundown old tavern.

Sergeant Snide ran the joint. Upstairs was filthy dirty movie parlor. And in the basement dark cubicles for some worn-out old has-been prostitutes—if you had enough credits left on your Food Stamp card.

But what did I expect? The Empire State Building? Some swanky Hilton high-rise skyscraper? I shrugged—it didn’t make any difference to me. What’s a recruiting station anyway? Just a place to sign on the dotted line—a chance to get out of Welfare State Dystopia. That’s all I wanted—to get outta New York City.
.
I saw it as a wonderful opportunity—to start over again. A doorway to another world—somewhere over the rainbow. I had no idea the recruiting office—would end up being a dumpy rundown Winnebago!!! Parked outside some dive down by the docks—next to a sailor bar called The Black Cat!!!

That’s where I ended up—ready to sign my life away. Ready to get a brand new spic and span Marine Corp uniform—and head off to Bangkok. How naïve I was.

They said they used a Winnebago—to get around as much as possible. All the bars, taverns and dives down by the docks—under the Brooklyn Bridge, anywhere young drunks might be hanging out. Who knows how many got Shanghaied—off to the jungles of Asia?

I walked through the door—and there was fat ugly Sergeant Snide waiting for me. He said with a self-justifying whine, “So you’d like to dress up in a uniform and pretend you’re a Marine, huh, kid?”

Sergeant Snide was wiping off a glob of cold cream in front of the mirror—putting the final touches on his ugly puss. He wasn’t exactly my idea of a butchy Marine recruiter—in fact he was rather fem and faggy. His Botux lips were pouty—he had these puffy rings under his eyes from the night before.

A particularly shocking song was coming through the intercom—it was Radio Bangkok from across the ocean. “Falling in love, again—I can’t help it…” It was unmistakably Marlene Dietrich—whining away like an old alley cat crying for the good old days.

Sergeant Snide didn’t even look up at me—as he turned first one way and then another. Eyeing his ugly profile in the smudgy cracked mirror propped on his desk. He was obviously vain—in love with himself.

Next came a ratty platinum wig that had seen better days. It fit snugly on his bald head—like a pharaoh’s moldering skull cap. Some of the fake silver curls hung down salaciously in front—like a skanky serpent on King Tut’s mummy mask.

“What did you say?” I asked politely. “Maybe I’m in the wrong place or something?”

“Mickey!” he shouted to the corporal in back. “Bring me the kid’s file, will you? I left it in the bathroom.”

“C’mon, kid,” Sergeant Snide said. He sensed my nervousness—it was obviously oozing out of every pore. I sat down in the chair—in front of his desk.

Sergeant Snide was the spitting image—of Java the Slut in that old Star Wars movie. The rolls of fat folding over themselves on his neck—undulating down further rolling over his stomach.

Snide lit up a cigarette—pushing aside the makeup kit and getting down to business. He wiped his hands and lips with a filthy hankie—glancing through my Official 334 File. It wasn’t a pretty picture—I suppose. But neither was he.

Snide giggled dismally now and then—pawing through my niggardly naughty File. Then he burst out laughing—without looking up.

“Your girlfriend, Frances Schnapps? She doesn’t seem to give good head, kid? What’s the matter, huh? Those buck-teeth of hers—got in the way?”

Without missing a beat—Sergeant Snide smiled and pushed a couple of camcorder snapshots at me across his desk. It was Frances and me last night. One look and I looked away. I should’ve known Big Brother was queer—playing Miss Voyeur with every single move I ever made in 334 housing.

I was beginning to feel somewhat humiliated—for some reason. The photos were pretty grainy and rough—but the expression on my face was pretty real. Sergeant Snide winked at me—any illusion of privacy was pretty much stripped away. Suddenly I felt sorry for Frances—I’d make it up to her.

“So you wanna leave all this wonderful sex life of yours—for boring ho-hum Bangkok nightlife, hum, Jommy Yuck?” Sergeant Snide sat there like a fat toad—as I cringed in the chair feeling bad.

Sergeant Snide shook his head—thoroughly enjoying himself. His ugly bloodshot eyeballs—slowly began extending themselves on long skinny stalks dangling from his reptilian bloated body. His nostrils turned viciously canine—sniffing me and my fear.

There was no doubt about it—Sergeant Snide was really an alien in drag!!!

“Actually, my dear” I said, “I’ve seen a lot of fags in drag. But none of them, Sergeant Snide—could be prettier than you, sweetheart.”

Sergeant Snide glared up at me—his eyebrows raised in shocked disgust. He blushed like an old whore—if that’s even remotely possible.

Suddenly he became the sniveling parody—of all my welfare queen self-doubts and dystopian fears. I could see Sergeant Snide’s stretch marks getting bigger and bigger. Ready to—pop goes the weasel!!!

Snide was starting to go into his standard Scheherazade Dance of the Seven Veils routine—one could hear flesh-flute Muzak coming in through the intercom from Planet X.

I realized then I’d be wasting my time with Sergeant Snide and the Space Marines. I didn’t wanna end up a sex slave on Titan—doing burlesque shows for the boyz working the Rings of Saturn. And only Gawd knows—what would happen to me in that wicked city Bangkok?

For a second or two—I stared at Snide. And then went outside—down the alley. The Winnebago behind me—levitated and then took off for Mars or wherever. I didn’t care anymore—for his butchy lies.

Back to my normal, mundane, day-to-day, Dystop-depressing existence…