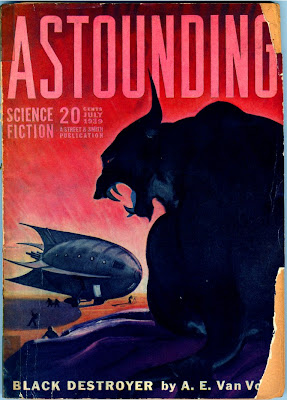 Monsters of the Id

The sense of id was so overwhelming—that my brain drifted off into some seemingly ultimate urge of chaos. I felt as if my limbs were bathed in some kind of molten liquid—my inner vision getting cloudy again. The sheer sensuality of my desire—hungering deep inside my guts.

My id-desires oozing through me—making me remember back when I first encountered these naked id-apes. It was centuries ago—on another world. My home world—the dying triple-sun world of the Coeurlians.

It slowly became quite clear to me—why I was having these sheer sickening sensualities bathing my brain. Drowning my brain-cells—inundating my cerebral cortex with pure unadulterated id-déjà vu. It wasn’t the black noir alley I came from—or the neo-noir nightclub with its loud music and gimpy young gangster types.

It was just another one of those murky moody flashbacks that had been bothering me—old and stale like some beat-up, well-thumbed through, old pulp fiction paperback novel. Or worse yet—a yellowing forgotten old Thirties slick magazine from some dead, gone and forgotten drugstore that didn’t exist anymore. Something like that 1939 edition of Astounding—with its aging torn Van Vogt cover oozing with its crummy nostalgia for a future that never was.

It was like trying to walk on quicksand—I kept sinking down into the goopy mess. Down into some queer strange kind of id-quagmire—from which there was no escape. It filtered and morphed its way through time—like images from some kind of sickly nostalgic neo-noir Grade-B movie from another time.

Like some horrible Paul Birch ancient black and white noir sci-fi flick—like Not of This Earth (1957). One of those cheap Roger Corman LA noir Saturday matinee alien monster movies—with me getting gangbanged up in the balcony of some dingy Bijou. Done in by leering “Jeremy” the greasy pimp for the gangster alien—cute but dumb Jonathan Haze who had the hots for Beverly Garland.

Couldn’t Beverly Garland get enough—of those crude lizard-skinned id-creatures like The Alligator People? I couldn’t help myself either—I was like Beverly. I had these secret urges for reptilian rough trade types. It was the slimy despicable juvenile delinquent juvie sci-fi addiction lurking inside me—I’d always been attracted to the skanky dirty greaser types in grungy louche nightclubs. That dark hole in the fading brick alley wall I’d walked through—that’s when the id-effect kicked me in the balls.

That’s how bad the ache was—who said nostalgia for the past was a rose garden? It was more like being overwhelmed by garbage—submerged in some kind of forbidden id-planet nightmare. Not being able to escape from the clutches of haughty young pod-people pinheads—those excruciatingly cute cretins with their crazy id-infused naked bods.

I felt as if my long dormant Coeurlian limbs and hibernating brain—were adrift and floating on top of some overwhelming kind of shameless undertow. A sense of naked id-ape vulgarity and the worst kind of earthy voluptuousness—floating like jizzy jetsam and obscene flotsam on the surface of some inescapably doomed Sargasso Sea. That’s how powerful and overwhelming—the memory of my Coeurlian past-life was plaguing me...into this Earthside present.

I’d been standing in the driving rain outside in the filthy alleyway—letting the putrid radioactive slime of the past getting cleansed off me. I could only take so many disgusting naked id-ape juicy encounters—with these all-consuming yet somehow delectable derelicts that I found myself attracted to.

Why did I find myself caught up both in my past existence and now somewhere in the future—the here and now of this frenzied horrible scornful cosmopolitan Earthside present? Memories of my long-gone past-life id-planet world—and that irritable exploring spaceship that doomed me to this fate.

All of it beginning to slowly flow back—into my throbbing crummy id-consciousness again. Through these ever-developing and more vivid streams of cinematic consciousness—belonging to these troubling humans with their kitschy images and disgusting tacky Bijou matinee tastes?

Crawling from one slimy bar to another—I felt like some kind of sick nervous Astro-zombie looking for a quickie id-fix. Jumpy, sick—with my awful hunger. An angst-filled bunch of alien urges—all rolled up into one urgent cat-like stalking creature. Cruising all the monkey dives—stooping to conquer them. Stopping inside back-rooms—trying to satisfy my hunger for these naked ape id-creatures and their disgusting de-evolutionary urgings.

It was like being caught up in some kind of slimy neo-noir Fifties Mickey Spillane movie—like Kiss Me, Deadly. Or even worse—with some horribly formidable camera whirring inside my head. Me as gaunt sunglass-hidden Paul Birch. Sucking my victims dry—down in the basement of my Sunset Boulevard LA mansion.

I was so hard up that I even—prowled dingy dark Hollywood movie theaters late at night. Skulking in the shadows—looking for id-tricks in the crummy balconies. Not of This Earth wasn’t good enough for me—I hung around for the slimy no-good second features.

The despicable second creature-feature—that actually turned me on more. Yes, I’ll admit it—I had some of the best sex during Attack of the Crab Monsters (1957) up in the dark balconies. Even though it had to be one of the worst sci-fi noir flicks ever filmed—still that Roger Corman could dream up the best neo-noir sci-fi fantasies right up my slimy alley.

My mind became a blur of crummy images—watching everything else with half-attention. And ever more imminent fear grew inside me—the moment when I knew I simply couldn’t carry on the torture of pretending and acting like I was a stupid human being any longer.

My Coeurlian brain strained with an irresistible impatience—my body burned with the id-addiction and awful eagerness I was beginning to lose control of. I was beginning to fall deeper and deeper—down into the stinking Earthside cesspool of crime and corruption ending up being just like them. The naked id-apes crawling all over the surface of the planet—spreading out over Titan, Ganymede and all the other moons and planets of this crummy id-infested solar system I found myself captive in.

I couldn’t stand it any longer. A slimy green foam began drooling down from my mouth—making me look like some kind of mad man. I saw myself for one horrible id-moment—in front of a mirror when nobody was looking. It was like a shot between the eyes—I suddenly felt cross-eyed all through me inch by inch. It used to happen only when I was getting off—but now it was all the time.

Humans started avoiding me—shunning me as I floated up and down the great, gliding escalators in the luxurious malls looking for id-tricks. Pretty soon all the horrible memories of my harsh terrain back home—started coming back to me with flashbacks of that Earthside spaceship and its crew of naïve young two-legged beings who ended up disappeared.

I’d forgotten all about that ship—forgotten everything but my id-urges. My in medias res brain had been wiped clean—like the memory of some computer. I began cruising even more seriously the earth creatures—circling and racing around their city. Along deserted streets—taking short cuts with easy familiarity. I saw through gaping holes in the time-grid—the weakened matrix-walls through which the long corridors of moldering time were slowly cutoff by rotting flesh. I slowed down to a crouching lope—as my nostril-hairs and ear-tendrils caught the id vibrations on this strange planet Earth.

Suddenly, I stopped and peered down a scummy alleyway. A young hoodlum id-creature was leaning against a fading red brick wall. He was sending out glaring rays of hustler moodiness and sullen id-anger into the gloomy alleyway. He sneered at me and flicked his glowing cigarette at my feet. It was then that it happened—something animal-like clicked off in my head.

The sulky Earthboy, well-built and muscular—he was a typical, powerful, gangster-type naked ape. I stood there staring at him—he was just my type. He began walking away from me—with quick, alert steps. He had nowhere to go—but he didn’t like being around me. He had somewhere else to go—and it was going to be anyplace with me. I was attracted to his snotty keen alertness—it meant trouble because that’s the type with lightning reactions that can be dangerous.

I waited until the smooth leather-jacketed young naked id-ape—vanished down the alleyway and around a corner. Then I padded after him down on all fours—smelling the scent of prey coming out in me. He was running now—looking back over his shoulder. Trying to get away from me—fast. But my kind have always been tremendously faster—than any mere human could run. He saw me running after him—down on all fours stalking him. The animal in my brain—only wanted one thing.

Like a wraith, he slipped down the next alley—past a long block of buildings. He turned the first corner at top speed—and then, with fear deep in his belly, he hid in the half-darkness between the building and a huge chunk of debris. The street ahead was barred by a solid line of loose rubble—turning his escape into a blind alley. He was trapped—at the end of the narrow alleyway. Ending up—against a wall. He was bottlenecked—I slunk up slowly in front of him. It was his neck I went for—his quivering jugular and big juicy Adam’s apple swelling in fear.

My savage ear tendrils were smoothed back—like a panther in the darkness. I caught the low-frequency waves—of his whistling panicky breath. The sound throbbed through his being—sudden terror catching him with icy fingers around his throat. The hoodlum hustler had a knife—but it didn’t do any good.

All I wanted was his neck—and that strangled look on his face. That one last burst—of his snotty brainstem. The naked id-ape energy—of his veiny neck muscles. As I snapped his neck—and drained dry his one last runny spastic Charley-horse.

A little shower of rain—streamed down on us afterwards. And then the naked id-ape was there—sprawled beneath me. I reached out and struck a match—lighting up a cigarette. There was nothing else—but the sound of rain. Gushing through the guttersnipe gutters—down into the alley…

It was so simple—to tune in to it. The vibrations of these—young Terran toughies. And their—truant id-energy.

It was always there—hiding in the violent chemical-criminal disorganization of these young naked apemen. It was a male species thing. The id was, I’d discovered—mostly down there in the bone.

I felt revived—almost reborn. Here on Earth—there was more food than I’d had in a long time. A few minutes—and it was over. I was Coeurl again—instead of a carnivorous id-cat creature of the night. Now I was off—like a thing fleeing danger.

Cautiously, I loped down the alley—from the scene of the crime. Then I was on two feet again—gliding noiselessly. I slipped unnoticed—back into a bar with a group of men.
Posted by pugetopolis at 8:40 AM