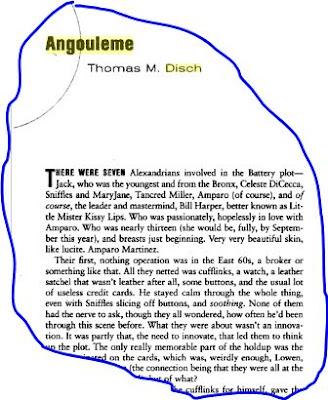 “Hybrids are
delicate organisms.”
—Thomas M. Disch,
The Dreams Our Stuff
Is Made Of: How Science
Fiction Conquered the World

There were nine great expectations involved in the Manor House plot—Pip, who was the youngest and from the Bronx, Bentley Drummie, Wopsie and Whimple, Biddy, Abel Magwitch, Joe Gargery, Jaggers, and of course, the leader and mastermind, Estelle, better known as Little Miss Kissy Lips. Who was passionately, hopelessly in love with Pip. Who was nearly sixteen (he would be, fully, by September this year), and pubes just beginning. Very delicate beautiful skin, like Lucite. Pip was a late bloomer.

What can I say? He was a darling boy. I had this flash of satanic Slan chic—an off-the-wall moment of sophomoric surprise. Like catching him naked—doing something he shouldn’t have been doing.

Errata, the Muse of Dissociation, jolted me out of my Miss Havisham stupor. Suddenly I emerged from the depths of my deep dark depressing Sargasso Sea of ho-hum daydreams. I’d pressed the button for Thai Food Takeout—and this is what I’d got instead!!!

Young Pip stood there before me—smirky, louche, transgressively “punk.” He exuded all the malevolent ambience of a Jommy Cross gone bad.

A bad boy Slan hustler—obviously the result of his habitually abusing an illegal growth hormone extracted from the pituitary glands of human corpses. It was a bad habit the youth had got involved in—taking advantage of the blackmarket hormonal traffic in third world political prisoner bodies used for illegal transplant purposes.

He yawned. I was used to such insolence. In fact, I preferred insolence to the usual dumbed-down Manhattan subservience I’d been getting lately.

It was typical of the welfare state boyz and girlz coming my way the last couple of months—it’s so difficult getting decent help these dayz.

Greater Expectations Inc. tried—they really tried. But the diminishing gene-pool of unpolluted youth was getting worse and worse.

Wealthy well-to-do Rich and Famous Fags and Miss Havishams like me were having more and more difficulty finding what we needed. What we needed and wanted—to keep from being bored.

Yes, my dears, Modern Maturity can be so boring—in this Age of Cybernetic Libido Care and Ever-Life Expectations. How many filthy rich haughty old Miss Havishams like me are there left anyway? Bored, spoiled, jaded, taken care of—here in the Interzone Future of Trans-Mex-Americano-Canada?

Pip was one of the perks I’d come to expect every Saturday night—to keep my permanent adrenaline high going. Aging perps like me needed to jack into the fast lane of Slan custom-made adolescent hustler hormones continuously—to keep our disembodied consciousness going thanks to the teenage consensual hallucination known as “Oulipo.”

“Oulipo” was only for TPTB—the rich elite who could afford the crème de la crème. Yes, psychotropic drugs and a pierced nipple or two helped—but basically it was Bad Biology that made the day. Bad Biology backed-up with risqué nasty skanky genital genetic engineering feats—that would make your mother blush.

The decadent Neuromancer neurosurgeons from Rome only too willing to dabble in the fabulously lucrative Artform—their wealthy demanding clients in the Vatican and Taromina famished for new more young and earthy equine-endowed tricks for their Sistine Chapel boudoir delectations.

Don’t ask me—I’m not into such weird and trashy trade. Not much anyway—well, maybe once a week.

The world of “Oulipo”—appeals to my protosurrealist literary understandings but my animal intelligence IQ is rather limited. I still read the classics like Charles Dickens’ Great Expectations the old fashioned way—word by word, sentence by sentence, chapter by chapter. Patiently whiling away the hours—sitting here in my leather lounge chair by the fire with the rain beating down on the windows outside of my Central Park condo now in the year 2050.

Raymond Roussel, William Burroughs, Eugene Ionesco, Italo Calvino, Samuel R. Delany, Thomas Disch? Of course, I’ve heard of them, my dear. I’ve read them all now and then—especially when I get into a Van Vogt-esque nostalgic mood for the future. A future of “possible fictions”—a la L'Ouvroir de Literature Potenialle.”

Pip smirks at me and my literary pretensions. He calls them my “Oulipo-orgasms”—although my true tastes run toward that sleek genetically-stylized slinky limousine down between his legs.

Pip’s grown somewhat impatient with me by now—smirking at my hard-to-get, put-upon, pouty pretensions of haughty grandeur. In his nefarious neat little hustler imagination—he’s adding up the bill of a million credits per second as we play out our little game of show and tell.