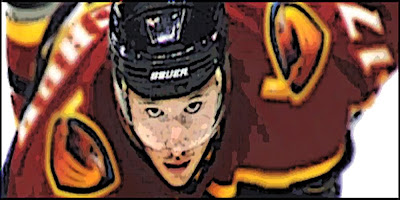 “You see, I had this spacesuit.”
—Robert Heinlein, Have Space Suit—
Will Travel

Armless, legless but far from clueless—Flambeaux was one of the new breed of Space Age Hockey Stars way up there in orbit over the planet Earth.

His team the Toronto Toros of the now-defunct World Hockey Association had gone far beyond the old Maple Leaf Garden Toronto ice rink way back when. Now they were the interplanetary Free Fall Killers—the leaders of the new Space Hockey League.

Flambeaux smoked his Orbit cigarette—enjoying its spiked hallucinogenic side effects, as he got a massage in the space station gym. He was recuperating from the last hyperspace game.

“Jeez, I’m getting too old for this,” Flambeaux said to himself.

Even though Flambeaux was only eighteen—he still felt like he was a million years old. A million Canadian dollars couldn’t make up for the fact that he was burned-out, used up and ready to be traded by the syndicate for the funny farm and early retirement from the ruthless game.

His usefulness to the SHL lasted only a couple of years—after that it was bye-bye off to the trash-heap of old has-been space age hockey players playing part-time for the minor leagues out by the rings of Saturn for the Titan mob. What else was there to do for a retired space hockey star like Maurice Flambeaux to do?

Have spacesuit—will travel? Have hockey stick—will play space hockey? Maurice laughed to himself. Wasn’t that one of the in-house jokes by all those Heinlein space opera queens?
.
Flambeaux shuddered to think what he gave up—to be a space age death-defying hockey player. He wished now he’d stayed Earthside—being a juvie sci-fi cowboy kid lost in the alt.welt little world of adolescent angst and bored Earthboy ennui.

But you know how desperate young males can get for action—they’d give an arm and a leg to get into orbit and be a Skyway Hockey Star. Which is what Maurice did—to get his way, to get his wish, to join the ranks of Space Hockey League.

The name of the game was to end up with a space age sleek physique and a hockey puck lozenge body without any arms and legs. That was one of the sacrifices he’d make—on the Toronto operating table before joining the Skyway Sports Division.

Organ transplants and deep freeze storage was nothing new in 2050—he’d get them all back again soon enough. Either that or he’d let some poor unlucky Earthside stiff on the donor’s list get them as gifts to be human again after losing theirs back in the post-lyptic days of the NAU klone wars.

The North American Union post-apocalyptic living dead still existed in the mutant wards down there. Flambeaux’s arms and legs were helping somebody to exist as best they could. If he ever wanted them back—all they had to do was pop the Velcro connection and snap them back on. But he doubted he’d ever go Earthside again—too many bad memories and old girlfriends.

The mutant masseur was getting a little too touchy-feely, Maurice thought to himself. But still it felt good to have his arm stumps and leg phantom pains massaged and oiled by a loving queer professional masseuse.

Up in orbit all the space sports doctors and nurses were pretty much all cold and crummy—but the fag masseurs were always more than willing to do what it took to make a guy feel like a million bucks. Being a quad wasn’t easy—especially when you’re young and all that young male libido is still kicking around. Somebody’s got to do it though, he smiled to himself.

Flambeaux kept his eyes closed and let the queer fingers of the mutant masseuse do the walking and talking. Maurice wasn’t the vain type in love with himself anyway—have spacesuit will play hockey wasn’t much of a romantic gig anyway.

The mirror in the ceiling wasn’t turned on—what he’d see wouldn’t be pretty anyway. Basically he was an armless legless muscular athletic torso—the kind that fits tightly into a space hockey spacesuit. When he was wearing it—he looked streamlined like a sleek lozenge of life and death metallic smoothness.

His automatic wrap-around bullet helmet snapped down over him transforming him into a no-nonsense killer hockey player ready to score for his team. Razor-blade fins and electroglide wings made him faster than any android Andromeda from the other leagues.

Some guys got blue and moody—homesick for what they’d given up surgically to be a space hockey star. For them there were the genetically-engineered Velcro-limbs to snap on and off when they wanted to party or dance with the satellite girls. It gave them a feeling of being human again—to please all the girls in orbit who wanted a man all in one piece. Maurice shrugged—who cared? He didn’t’ feel sad about anything—he’d always wanted to be a hockey star. Now he was one...

He still had his hockey stick between his legs—that was the main thing that counted. It felt good—the afro-dizzy pubes and twelve-inch tool that was a key to his trade. The mutant masseurs loved it—their 12-fingered hands undoing the knots out and soothing the bruises from his last killer game against the Vancouver Vandals of the Void.

“Deeper,” he told the mutant masseur kid, feeling his abs coil and uncoil like a cobra coming out of its basket.
Posted by pugetopolis at 12:27 AM