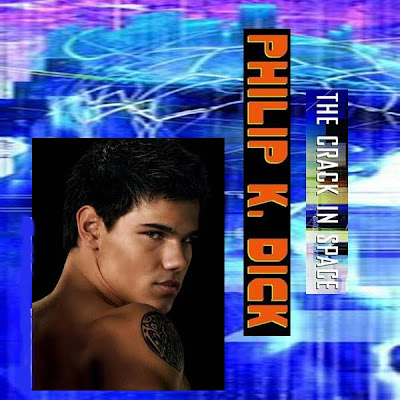 “The combination of a large cranium
and immature face would look
decidedly unusual to modern eyes,
but not entirely unfamiliar. Such
faces peer out from the covers
of countless science fiction books
and are often attached to “alien
abductors” in movies.”
—Gary Lynch and Richard Granger, Big Brain

http://discovermagazine.com/2009/the-brain-2/28-what-happened-to-hominids-who-were-smarter-than-us/article_view?b_start:int=0&-C=
.
“They probably remember us
from their past, remember
getting rid of us. Just as we
got rid of them in our world,
he thought. Wiped them utterly
out. And now we’re back—it
must seem like black magic to
them: ghosts from a hundred
thousand years ago, from their
own Stone Age.”
—P. K. Dick, The Crack in Space

He could feel himself walking upright again—the widening of his new human pelvis, enabling for the vertical placement of his femur (thigh) bones under the new center of gravity.

And then he felt the ability to pass a rather large brain child during birth—an opportunity for his greedy neural community not failing to exploit it even before his drive for higher intelligence started to shape his more human evolution.

He could feel himself walking upright again—even though that didn’t require a big brain. It was no more difficult than the aerobatics required to escape a diving Pterodactyl (a flying reptile of small brain but supreme abilities).

But his heavy head required an upright posture—in order to place the load on his spine rather than holding it extended horizontally by strong muscles.

So that his new way of walking had to precede the enlargement of his brain. His unlikely pre-adaptation to big brains was successful—because it enabled the intelligent ape in him to find new niches there in the expanding savanna. Outside the diminishing rain forests—shrinking during the ecological changes of the time. The advantages of his intelligence weren’t the drivers in this process. Something else was…

In the internal "Darwinian struggle" for survival amongst populations of different cell types—his Boskopian neurons were the clear winners. They began to hold every post of governance and control—totally directing the actions and inactions of the rest of the body.

They managed this feat mainly because their network organization was so much more evolved than any other cell type. So they exclusively occupied the "executive suite on the top floor"—a position that allowed them access to disproportionate amounts of energy, a unique "firewall" to block blood carried dangerous agents, and a strong bone cage against mechanical hazards.

The "Parkinsonian" tendency of his Boskopian command centers to grow to the limit of the available resources—it was something that later he could use in every type human organization. No reason to believe that it was any different inside the human organism—than his own neurolinguistic mind.

The Boskops had large brains because they could feed enough neurons to fill the volume—he could feel the oversized executive team sometimes not being very efficient, because its growth was not checked by competition between conflicting architectures. These architectures reflected alternative synapses trimming strategies—one of which produced the framework ideally suitable to categorical thinking.

Categorical thinking led to language—and after that he started having better intergroup communications, teamwork and (sometimes) peaceful conflict resolution. “I think, therefore I speak”—(well, most of him most of the time). His brain had become very large—so he’d started to think a lot more about subjects unrelated to survival.

He soon realized that the Boskops had troubles thinking—because of the internal "noise" generated by all those useless synapses in their untrimmed brains. They became the winners because soon their brains became smartly groomed—he could feel the collapse of useless synapses being tested before coming under the trimmer's merciless blade.

His brain was getting slightly smaller—but better suited to produce intelligence. So, he could feel the Big Brain inside him getting better? Definitely yes. Especially to the young Boskopian psyche inside him eager to contest received wisdom—who wanted to use other more mind-opening neurolinguistic textualities and sleek new hominid sexualities to enrich his Boskopian creative thinking.

Because the new Boskopian that he was becoming—needed a lot of creative hominid minds to explore the new neuroimaging breakthrough with—this fascinating new neurolinguistic endeavor thrown open to him—his new ability to understand both brain and mind had mushroomed grotesquely.

He’d become a Boskopian psi-mutant hominid—like the Pekes before him because of the Jiffi-scuttler rent time-lag. He was already scanning through the crack in space—the audience of neuroscientists gathered around the dormant little skull fragment.

He was reaching into the minds of Dr. Lurch Lynch and Dr. Groovy Granger. He paused briefly—checking out their low IQ and slow intelligence. They were moving and thinking in slow-motion—they were as stupid and bumbling as the Pekes.

But still they’d managed to MRI-image the crack in space—the ragged jig-jagged crack in the Boskop skull. It had become their portal of doom—the demiurge ditch of the living dead.

Then suddenly he was mind-melding with the whole group of neuroimagists—and technicians huddled in the laboratory around the stainless steel operating table. His mind moved quickly through the Terran Development shock-troops personnel—and up through the elevators and passageways of the TD Headquarters.

His mind was like a sponge—absorbing tasty living hominid brains greedily. Sucking them into his Krell-like intelligence—one juicy screaming oozing human terrified Blob at a time. How easy it would be—to take over this whole lovely innocent planet.

After all it was just a pulp fiction planet anyway—the human hominids lived completely inside their tacky kitschy imaginary little universes. They were naively hopelessly unreliable narrators—mired neck-deep in their lying delusional nihilistic little novelettes.

How easy it was—with his super-intelligent pulp fictional imagination to go beyond them. To merge with their all-too-human meager eidetic imagery—and appropriate it, subvert it, transgress it with his own highly superior Boskopian primeval Monster of the Id imagination.

Pretty soon his Boskopian mindset ruled everything and everybody in sight—it felt exhilarating to be alive again. His frontal lobes throbbing with long forgotten deeply submerged memories—new memories totally unlike the savannah and veldt psychic vibrations from thousands of years ago.

He felt how powerful these new hominids had become—his Boskopian offspring in this new parallel world. He relished the thought of expanding his mind—throughout the DC Beltway and up the Northeast coastal plain to the hominid capitol. The one they called New York—glutted with succulent brainstems and gourmet neocortex hors-d’oeuvres just waiting to be slurped up like caviar.

That’s where his mind would meld and meander luxuriously—conjugating ever new mutant hybrid permutations of the Boskopian nexus. Getting the scene ready for his Boskopian others—his kind who were only too ready to squeeze through the new portal into the Terran future.

If the lowly hominids thought the Pekes were bad—they didn’t know how easy they had it. The Sinanthropian menace was nothing—compared with what was coming next. The Boskop menace—was much worse. Wait till they realized it—what had come out of the crack in space.
.
Beauty had finally conquered the Beast...