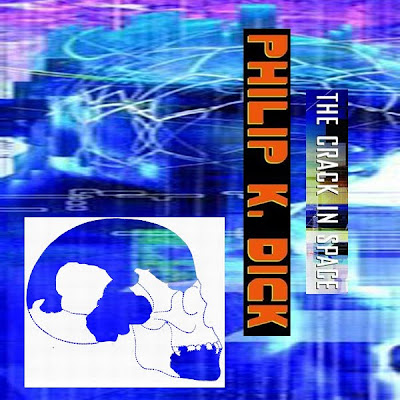 “And then he thought suddenly.
Maybe there’s one in which a human
type superior to us, one we know
nothing about, dominates; on which,
in our own world, we extinguished at
the inception. Blotto, right off the bat.”
—Philip K. Dick, The Crack in Space

“There’s just one thing we haven’t quite
dared to mention. It’s this, and you won’t
believe it. It’s all happened already. Back
there in the past, ten thousand years ago.
The man of the future, with the big brain,
the small teeth. He lived in Africa. His brain
was bigger than your brain. His face was
straight and small, almost a child’s face.”
—Gary Lynch and Richard Granger, Big Brain

“The Pekes known as Homo erectus were savage primitives—but they coexisted with the Boskops, the real forebears of us Homo sapiens,” Dr. Dillingsworth was saying on the vidscreen.

Dillingsworth pulled up the map on the vidscreen. There it was—in all its pristine blue-marble beauty. The overpopulated sexist Neocon Earth—the “Forbidden Planet” home for all of humanity plus the seventy million people that were being kept in cryopreservation.

Known as “bibs,” these were people—mostly members of ethnic minority groups—who decided to be "put to sleep" until a time when the sufficating overpopulation problem was solved. Would it ever be solved?

Tito Cravelli was getting cramps in his stomach again just thinking about it. The Sinanthropus mutant hordes pouring through the crack in space—the rent in the Jiffi-scuttler tube that had made the Pekes invasion possible…

And human colonization impossible. What President Briskin and everybody else got stuck with after the crack was opened and then couldn’t be closed. The nightmare alt-Earth that had been discovered through the crack in space.

“Actually,” Dr. Dillingsworth said, “it’s more like this. The crack goes both ways—both forwards and backwards in time.”

“Yeah, thanks to Rick Erickson, the poor dead duck repairman,” Cravelli said to himself. “That and the stupid Pethel Jiffi-scuttler Sales & Services in Kansas City.”

The crack or rent in time had been stumbled on by a minor repairman in the basement of Pethel Jiffi-scuttler Sales & Services. He was repairing a defective “scuttler” that belonged to Dr. Lurton D. Sands, a famous transplant surgeon in New York.

The scuttlers operated along the lines of a limited form of time travel. Through the tube of the Jiffi-scuttler the owner could teleport himself anywhere on the planet for meetings and business. Jiffi-scuttlers were pretty much as common as vidphones and vidscreens—they hadn’t changed much over the years.

The Jiffi-scuttler that was supposedly defective that Dr. Sands owned had a crack or rent in it. It opened into a parallel world and lots of problems for everybody. These parallel worlds were a knotty problem—one wonders how many existed? Dozens? With a different human sub-species dominant on each? Weird idea. Like concentric rings of Dante hell—each world with its own hellish torments?

“Which is what happened,” Cravelli said to himself. “And we thought we were bad off before.”

They’d temporarily sealed up the crack—thanks to Briskin’s cool thinking. The head Sinanthropus leader—a mutant telepathic genius groomed by an unhappy George Walt pair of twins—had withdrawn his troops once he realized our world wasn’t fit for any decent colonization by his world of Pekes.

But now with the recent rediscovery of the Boskop skull’s fascinating history, attempts were being made to revisit the parallel world by zeroing in on the Boskopoids—the big brained forerunners of Homo sapiens who in the parallel world had been eliminated by the aggressive Sinanthropus species.

“And everybody knows that gang was no good,” Cravelli said, drinking some Irish coffee and eggnog for his peptic ulcer.

“The problem with these scientists is they never give up,” said Cravelli. “They’re always looking for ways to get around the Jiffi-scuttler paradox—seeing it as a problem to be solved rather than a sleeping dog best left alone."

“Always trying to work around the fact that the Sinanthropus gang have already wiped out the Boskopoids a long time ago. That along with the Pekes ending later on—doing in our whole Homo sapiens colonization project.”

The homeopages were already clamoring for revenge—and so was the Terran Development company founded by Henry Ellis. Leon Turpin ran the bloodthirsty corporation now—even though he was a tottering old jerry over 100 years old.

Turpin hated them—that whole Paleoanthropic wing of primate evolution known as the Sinanthropians. They were Peking men—a mutant higher form of the Pithecanthropi gang. They’d taken over the Lower Pleistocene in their world—about a million and a half years ago.

The Pekes were ape-men—with low vaulted skulls, heavy brow ridges running unbroken across their foreheads. But thanks to the George Walt gang though and the Golden Door satellite with its perpetual stream of junk, honky-tonk stag-shows pouring down over all the channels working in twenty psi-directions simultaneously in four colors—the Pekes now were high-tech and just as advanced as we were.

But the Boskops were different—they’d interbred with the Peking men producing Homo sapiens. All of whom had been exterminated by the aggressive, bloodthirsty Sinanthropians. Both the Boskopians and Homo sapiens offspring—gone just like that. Maybe there’s room on a planet for only one bloodthirsty species—Darwinian survival of the fittest?

“Yeah, but who in the end was more bloodthirsty?” Cravelli said to himself, thinking about what had happened. “Them or us? Why open the crack again—and stir things up. Are we crazy or something?”

How could parallel Earths differ so much—and still be considered authentically parallel?

“Unparallel is more like it,” Cravelli said. “On the other hand if both worlds were bloodthirsty—maybe they weren’t parallel worlds after all? Maybe all inhabited planets are the same—ones ruled by intelligent apes?”

Dr. Dillingsworth hated the “Siths”—the mutant Sinanthropians. You’d think a distinguished anthropologist wouldn’t have been so prejudicial about the whole thing. But he’d convinced Leon Turpin and Terran Development to fund another try at it.

Terran Development’s attitude was “We don’t want the government meddling into this. We’ll shut down the Jiffi-scuttler and abolish the nexus. After all, the Siths have still left the crack in space wide open—the rent is still there and we can’t close it. They could come back through it any time they wanted. Who knows what the Siths may want to do in the future—maybe invade us again!!!”

TD had got together a bunch of neuroscientists and linguists with linguistics machines—all the stuff you need to open the nexus again in another time zone. This time back to before the Boskops got eliminated—back before the Siths took over.

“So that brings us up to now,” Cravelli said to himself, sitting up groggily, barely managing to answer his vidphone.

“You know, just as I know, that something is awfully wrong again,” said Jim Briskin.
Posted by pugetopolis at 4:29 PM