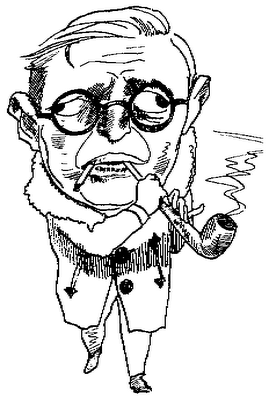 “The Nausea is not
inside me: I am the
one who is within it.”
—Jean-Paul Sartre, Nausea

The monsoon season in Mudville—it’s always so very dreary and depressing. November is usually when the rain starts—turning all the trees into tall gaunt Giacometti statues.

It’s them I keep expecting—herds of wild elephants to start storming through my living room. Like they do through Lana Turner’s swanky expensive palatial living room—in that exquisite 20th Century Fox movie of hers.

The Rains of Ranchipur (1956)—with moody sullen Richard Burton as her handsome turbaned Swami of a Lover. Theirs was the great sin that even the great rains could not wash away! The result being even more heavy incessant rains, earthquakes that wouldn’t quit and great unruly herds of mad trumpeting elephants stomping through their palatial home in India.

It sounds melodramatic doesn’t it—but that’s the way I feel every monsoon season here in Mudville. All the trees up by Ranchipur Boulevard—stripped and denuded of their leafy foliage. Even the tall proud cedars and Douglas firs—standing up there naked in the dreary rain. No longer buffering the Rush Hour traffic—the commuter crush of cars, trucks, busses and those fire-engine loud sirens coming and going.

It makes me want to scream—in fact just the other day I did hear somebody scream. It was my next door neighbor—a mild mannered retired salesman who worked at Wal-Mart. Always calm and stable—but all of a sudden I heard him scream at the traffic. It was just awful—it made me somewhat reticent about doing it. I was just about ready to do it too—to scream at the rush-hour traffic outside.

Sometimes it’s a low growling steady noise up there by the street—other times the huge Mack trucks going by fast and furious hitting their loud air-breaks on the curve up by the Lakeside Tavern. They remind me of those angry stampeding elephants—in the cataclysmic stormy Rains of Ranchipur.

In fact, I call the commuter rush-hour traffic—the Rains of Ranchipur Rush-Hour. Sometimes it’s so loud and depressing—I hide under my bed with my cat. I cower in fear and loathing—sensing a huge ugly Rush-Hour Monster of the Id prowling and snarling way up there up in the street.

It’s almost as if the Rush-Hour traffic—were a Medusa-like creature with a thousand snaky headlights writhing up there with all the pushy honking cars and trucks and busses and motorcycles going by. One single evil intelligence—in a hurry to get somewhere fast. It was just awful—I wanted to scream.

Just the other day hiding under my bed—the screeching screaming siren-howling Rush-Hour Beast became so viciously violent and alive that I swore it was calling out to me. It was aware of me hiding from it—and was angry with me for not joining the rest of the Rush-Hour Mob in the daily madness and teeth-grinding ritual of struggling to work and fighting its way back home again.

There I was in the comfort and safety of my dumpy little bungalow—hiding under my bed instead of letting the Rush-Hour Monster devour me, eat me alive, gobble me up in the carnivorous carnival out there, swallowing me alive like it was doing to all the rest of humanity. Monday morning blues especially—swarming commuters, honking truck drivers, fuming fire-trucks, big-assed busses, frantic demanding ambulances, fast weaving motorcycles and all the rest of them.

The Rush-Hour Beast wanted me—it couldn’t stand the idea of there being one single little crummy human being left alive and safely ensconced under a bed hiding from its Wrath of Khan. But I was far from feeling safe or feeling brave & heroic—I was still very frightened and felt so lonely quivering in my bedroom. I was just the opposite of what the typical alpha male commuter has to be—I wasn’t aggressive and pushy or ready to challenge all the other wicked sharks cruising the highway up there.

Hardly, I felt more like a limp-wristed effeminate Marcel Proust—hiding in her cork-lined bedroom while Paris outside the window going mad. I’m sure the Parisian Rush-Hour Traffic could get just as hectic and crazy—as the American variety could get. Both Proust and I were such fem Milquetoast types—mincing, mangled, manhandled, mealy-mouthed misanthropes that we were. Did Proust hide under her bed too—the way I do? I wouldn’t doubt it—dare I say with her hookah and all the other decadent accoutrements of her scandalous novelist trade?

Even now I can hear it—the Rush-Hour Monster. The Boulevard Noir. Calling out to me—taunting me with its cacophony of creepy demanding infernal combustion voices. How dare I not be part of the Monday morning nightmare—all the twisting metal, honking horns, screaming sirens and horror show shenanigans going on out there. I shudder in fear—plugging my ears with Bubblegum like Ulysses to protect me from the evil Siren calls trying to woo me to my doom and destruction.

The really terrifying and truly scary thing about the Rush-Hour Beast—is its cold-blooded many-headed Gorgon-esque ONENESS. Its single-mindedness—its crude all-encompassing omniscient “Elephant in the Living Room” aesthetics—the Thing that makes the hectic cosmopolitan Rush-Hour Beast a single engorged Godzilla entity out there. It’s the thing that gives birth to all of us—it’s the thing that wants us all to come back again to its urban womb.

Even the most tiny nelly bit of frail uncertain fragile existence—enjoying an itsy-bitsy small smidgen of freedom like me. Even that can’t be tolerated—it certainly mustn’t last long. The Rush-Hour Monster—it’s the Beast with a Million Eyes. It ogles, it slithers bumper-to-bumper—it covers the planet with its disdainful fumes. It hates me—it’s just terrible.

It takes lots of Rush-Hour Traffic and huge amounts of moving Heavy Metal and Exxon Shell Oil Baron Energy—to keep the City going smoothly. It’s starved for energy—both human and vehicular. Lots of comings and goings—the industrial heart throb of busy traffic clogging the highways and keeping the system moving. Gridlock is its goal—gasoline is its god.

It’s like the Rush-Hour of the Gods—all of Dante’s Circles of Heaven, Purgatory and Hell going lickity-split down Ranchipur Boulevard. Only silence, exile and cunning—can surely save me from such a horrible predicament? To avoid being caught up—in the darkness of the infernal Boulevard Noir.

Posted by pugetopolis at 2:17 PM