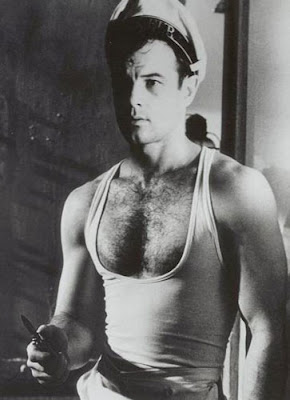 Deathwatch (Haute Surveillance) was published by the Librairie Gallimard in 1949. The text, however, was greatly altered by the author in the course of rehearsal. The present translation follows the acting version, which supersedes the published text.

Though published and produced after The Maids, Deathwatch is Jean Genet’s first play. It was performed for the first time at the Théâtre des Mathurins in Paris on February 24, 1949, and was directed by the author. The sets and costumes were designed by André Beaurepaire. The cast was as follows:

GREEN EYES: It’s you, Píazzo. Stop annoying them. I don’t want to hear any more about Stonewall. Neither Stonewall nor any of those gay guys bother us. Mind your own business.

PÍAZZO: (He listens) I don’t believe in gay marriages.

GREEN EYES: Visiting hours have started. It’ll be my turn in a little bit. (During the following scene he keeps pacing up and down) Vickie wants to see me.

MAURICE (pointing to Píazzo): He’s always trying to make trouble. There’ll never be any peace with him around. For him, no one matters. Only himself.

PÍAZZO: (Violently) That’s right. You said it. I’ve got what it takes. Don’t mess around with me. I’m both Black and Puerto Rican—I’m a noble savage if I wanna be. Nobody tells me what to do.

PÍAZZO: Green Eyes, I’ve got it all over him.

MAURICE: You starting again? It’s because this morning, on the way up from recreation, he smirked at you in the hall.

PÍAZZO: At me? That sure would surprise me all right. (Green Eyes turns around, stops and stares at Píazzo, then at Maurice)

MAURICE: There were just the three of us. If it wasn’t at the guard, it was one of us.

MAURICE: Ah ha? So you’re interested. Just before we got to the committee. Oh! (A faint smile) Just a little wisp of a smile. You were winded from the four flights.

PÍAZZO: And what do you make of it?

MAURICE: That you’re one who causes all the trouble in this cell.

PÍAZZO: Maybe. But just let dummy Green Eyes here know I outclass everyone else here. No one gets me down, no convict, not even him can outshine me. Green Eyes is a real bruiser and he’s been around. But I could snort and you guys would vanish.

MAURICE: Who’s denying it? Green Eyes is a goodlooking guy. As handsome as they come. And well-built. You might even call him a Greek god. But you’re no more than the next guy. Don’t think I’m taken in by you, sweetheart. Your talk about crimes and politics is just a lot of hot air!
.

GREEN EYES: (to Píazzo) Don’t interrupt him. (Listening at the door) It’s almost time for the visit. The guards are at 69. (He strides around the cell clockwise)

MAURICE: Hot air. I don’t know care anything about your crimes… All you do is stir up trouble.

GREEN EYES: (still curtly) Píazzo, I don’t know anything about your crimes or what you do in bed. I’ve got my own problems…

PÍAZZO: Your own problems? You’ve only got one. And that’s your boyfriend, Maurice.

GREEN EYES: If I say “my problems,” it’s because I know what I’m saying. I say “my problems.” And no more comments or I might get nasty. Better not needle me. All I’m asking you is one thing. Mind your own fucking business, Píazzo.

GREEN EYES: There you go again, Píazzo. You’re not minding your own business. You’re gonna be in trouble pretty fast, smarty pants. Watch your step or somebody in this cell’s gonna be going for a joyride.

PÍAZZO: You make me sick, Green Eyes. I’m telling you straight—you better straighten up and stop messing around with Maurice and that crowd. Those gay guys are all going straight to hell—and you too if you keep acting like you’re married to one.

MAURICE: (Banteringly) Me? I’m the most peaceful kid in the cell block.

GREEN EYES: (To Píazzo) You’re pulling a fast one on me.

PÍAZZO: Go ahead and party with the fag. But you better start carrying around a Bible, if I were you.

PÍAZZO: Oh, Green Eyes, stop making a fuss. You’ll see your girlfriend pretty soon. You’re too goodlooking not to. You’ve got all the young ladies in the palm of your hand. They aren’t going anywhere. They’re waiting for you, sweetheart.

MAURICE: Don’t get worked up Green Eyes. That’s how Píazzo is. He likes to get you all worked up. He’s impressed by you. He wants to go to bed with you.

PÍAZZO: That’s right, I’ll tell you the truth. I do like you, Green Eyes. I think you’re hot and a real man. I just don’t understand why you’d wanna be stuck with Maurice as your lover. He’s such a Milquetoast little fag. I’m a real man and real men like you and me should be the ones being the boss around here. Not Maurice. (GREEN EYES neither answers nor moves) The only real question, Green Eyes—is whether you’re Top or Bottom, man.

GREEN EYES: I’m not a little slut, are you Píazzo? Lying that way to me. Making a play for me. Admit it, it’s been that way from the beginning. You play hard to get and above it all. But you’re really just another whore all dressed up and nobody to blow. Hoping to shack up with me.

PÍAZZO: Listen, Green Eyes, you’ve got me wrong. You’ve got to believe me. I didn’t want to upset you. I’d of told you, but (he points to Maurice) not in front of him. Didn’t I write those letters to your girlfriend for you, hmmm?

GREEN EYES: Yeah, but what did you tell her? You tried to put the make on her? I’m gonna ask her…

MAURICE: He’s just lying, Green Eyes. If he bothers you, he can still just vanish into the fog. He’s the kind of guy who slips through walls. Everyone knows that. No, no, Píazzo, you’re just handing us another line. Admit it—you’ve wanted Green Eyes’ girl all along. Go ahead and say it—I’ll believe you.

MAURICE: Okay. You’re bigger than me, go on, take it out on me, you’ve been picking fights for the past week. But you’re wasting your time. I’ll see to it that Green Eyes and I will stay friends.

PÍAZZO: You’re the ones. It’s you two who’re against me. You don’t let me live my life—you bug me.

MAURICE: You see? You see, Píazzo? I can’t say a word. You’d like squelch us, all of us. Not on your life Píazzo.
Posted by pugetopolis at 2:46 PM