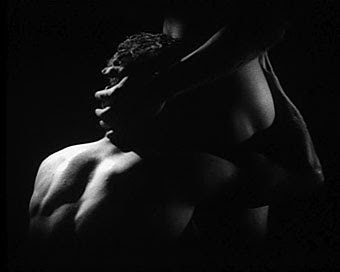 Speaking of lost Kafkaesque boyfriends—I watched Jean Genet’s Un Chant d’Amour last night. Not for the first time either—with or without the soundtrack.

Preferably with the soundtrack though—which added a certain amount of eerie stark realness to the otherwise symbolisme surrealist sumptuous filmic experience. Genet filmed it to be silent—a film of seductive homoerotic gestures. The images spoke—rather than the actors.

Listening later then to the Kenneth Anger commentary in the background was interesting too though. Listening to his heavy breathing sans soundtrack—with Anger telling the story of meeting Genet in Paris while showing one of his own films. Fireworks? I found myself agreeing with Anger that Fassbinder’s Querelle was a flop—compared with the exquisite surrealistic poetry of Un Chant d’Amour.

Talk about lost Genet boyfriends—so many handsome young convicts and murderers done in by the guillotine. Kenneth Anger mentions this in his commentary about how the actors keep caressing and fondling their necks—contemplating their approaching demise by the cruel cold slicing blade of the French guillotine.

Somehow death by guillotine fascinates writers like Genet and Nabokov. Why? Because of the sexual element involved—the Marie Antoinette angle? The idea of the French Revolution—Madame De Farge patiently knitting while the aristocrats had their heads chopped off. Flopping around on the scaffold-stage for the rude crowds to ogle at and laugh at?

Genet’s literary and filmic oeuvre is that way—one big ogling Eyeball fixated on the death of pretty bad boyz. Funeral Rites, Querelle, Thief’s Journal, Our Lady of the Flowers, The Maids—as well as choice individual poetic queer laments like “Love Song” and “Fisherman of Suquet”—both of them for his lover Lucien Sénémaud.

Both of these poems written, as Jeremy Reed says in his illustrated biography Jean Genet: Born to Lose—in the electrifying heat and élan generated by his “immediate attraction to the rough diamond he had singled out on the beach at Cannes.”

Lucien plays himself in Un Chant d’Amour—with his ongoing quivering lips, erect trembling nostrils, flat nose, flexing pectorals and enchanting tattoo. The epitome of that sort of visceral masculinity that appealed to Genet.

If one takes the time to watch the online movie version of Un Chant d’Amour once, twice, as many times as one wants—then it becomes obvious that Genet was not only a better moviemaker than Miss Cocteau or Miss Fassbinder, but that Genet had a way of visualizing and exploiting images on film just as secretly and seductively as he did on the page with his poetry and novels.

Luis Buñuel says somewhere that rarely is film and poetry combined in such a way as to do what has to be done—such as what Buñuel did with his shocking Un chien andalou and chilling Los Olvidados (1950):

Genet, Gogol, Kafka—how many boyfriends did they have and how did their Lucien-like potency filter through the loneliness and impassioned impossibilities of such writerly love?

Posted by pugetopolis at 9:40 PM