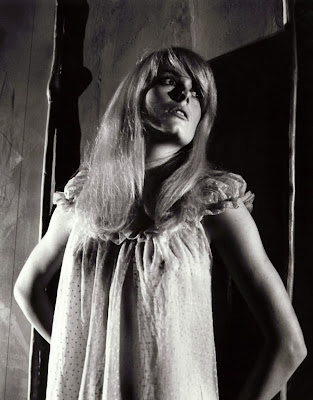 Catherine Deneuve plays Carol Ledoux in this early Roman Polanski movie. When I first saw it back in 1965, I was repulsed by it. Especially the scene with the hands reaching out from the walls.

At the time I was going to college—living in Smegma Hall on campus. The dormitory was full of louche Latinos recently exiled from Cuba because of the Revolution. Naturally they were lonely for their girlfriends—many of them still back in Havana.

The sounds of love-sighing went on & on during the night—soon I had a few boyfriends knocking on my door late at night. Word got around that I was easy—hardly a night went by without me getting any sleep. It was a blessing and a curse—I began feeling like Carol Ledoux. Repulsion set in but I couldn’t help myself.

Too much of a good thing—makes Jack a gay boy. Naturally I was repulsed by myself and my uncouth urges—but also all the mad Cuban music and brazen Latino sexuality got on my nerves. I fell into a tortured state of mind—like poor Catherine Deneuve. I ended up doing their homework, laundry and even became their manicurist. It was the only way I could keep their hands on me—I mean off me.

I started skipping classes—I had these horrible hangovers. I became unhinged with lust—even the cheap dormitory cinderblock walls had hands reaching out for me—trying to ravish me. When I looked in the mirror, all I could see was my grotesque and hideous repulsive face. My bruised lips were puffy with Cuban love—once they got what they wanted, they’d leave my exhausted lifeless body crumpled in bed.

Thank god the university was on the semester system—that way I could postpone my studies longer and avoid the inevitable mental hospital. The cracks in the dorm walls got larger & larger—but they weren’t the only repulsive hideous thing that got cracked. I felt like Blanche DuBois in Tennessee Williams’ A Streetcar Named Desire. I’d been depending on the kindness of strangers much too long. Even Armando told me that afterwards.

These young Cubans were such Latino lonely boyz for love—they felt cheated by the Revolution. They and their families (doctors, lawyers, scientists) had to give up everything and become exiles. They fled to Florida and Louisiana—many of them ending up in my arms. I don’t know how many of them whispered their girlfriend’s name in my ear at the very end—when they were making love to me.

At night the dorm vibrated with Latino music and loud voices. The Cubans were loud—they seemed excited all the time. I suppose I would be too—if I’d lost everything. My past, my present, my future. But it was especially hard on the young—they felt cheated by what happened.

Some took their anger out on me—they were ten times worse than Marlon Brando as snarling Stanley Kowalski. I’m not going to defend Marlon Brando or Tennessee Williams or Roman Polanski. Why should I? I was the one used and abused every night—I owned stock in K-Y Inc.

Earlier I’d seen Tennessee Williams’ Night of the Iguana (1964). I was very much infatuated with Fidelmar Duran as Pepe and Roberto Leyva as Pedro—the two kept Mexican boyz there in villa of Ava Gardner. They sang and danced around Richard Burton tied up in his hammock—who played the male hysteric again as usual. A role he was pretty good at—what a campy Hollywood drama queen.

A sympathetic lesbian line Burton makes in the movie (“Miss Fellowes is a highly moral person. If she ever recognized the truth about herself it would destroy her.”) seemed especially relevant to me. As my Latino love affairs grew more intense that year in the dorm—my self-awareness tormented and guilted me worse than any foreboding astrologic “Yod” in the heavens above. I deserved to be tied up in a hammock like Burton—instead I suffered the slings and arrows of one tragic “crush” after the next.

Pretty soon Armando moved in with me—he drove his friends away and was nice to me. He taught me some Spanish—we got an apartment on Highland Drive. He became an engineer, got married, ended up in New Orleans. After Katrina I went down to see him. He’d changed—and so had the Big Easy.

Posted by pugetopolis at 3:40 AM