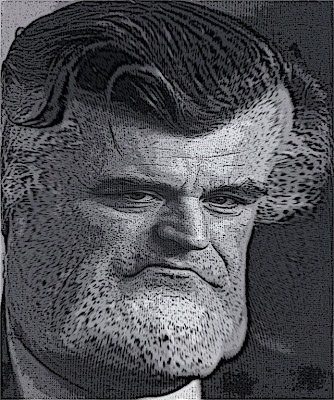 “You came behind me at
a helpless moment, as I
lowered a testing foot
into the running bath…”
—Ted Hughes, “The Offers,”
Collected Poems (2003)

It goes on & on—of course, my dears
Poor Ted—gets on the Northern Line
There at Leicester Square—sits down
Jaysus christ—there’s fucking Sylvia
Blank, pale—almost as yellow as
She was in the morgue—Dead
Poor Ted—shudders and squirms
Thank gawd—Sylvia ignores him
He gets off at Chalk Farm—but not
Before spitting—in her face first

Middlebrook mentions in her Introduction on page xix that Hughes’ poem "The Offers" pretty much pulls everything together:

"The Offers" is the central poem in Hughes's work of self-mythologizing. It marks the turning point in his creative life, showing in a set of images how the poet's powers were summoned back to him following the two successive personal disasters of the suicides of women close to him.”

It was published in the London Sunday Times on October 18, 1998. Ten days later he died. It was his last poem to be published. I kept reading my way through Middlebrook’s My Husband—waiting anxiously to read “The Offers.”

Middlebrook knows how to draw-out the suspense—there’s her calling out a premonitory lament:

“When will the stone open its tomb?
You will not die, nor come home”

I mean like—what’s there left after that? A magical resurrection—a rock ‘n’ roll White Goddess wedding? Can we talk? Anyway, I read Middlebrook’s concluding words about “The Offers” in Chapter 10 “The Magical Dead (280-283).

In “The Offers” Hughes describes a dream in which Sylvia Plath returns from the underworld three times, offering herself to his understanding. He first encounters her on the Northern Line of the London Underground, two months after her death… At the second of Plath’s offers, she is young and has assumed a different identity—he recognizes she’s flirting with him…

Flirting with him? Why does Ted Hughes have to somehow get “sex” into everything? Sex and marriage are okay—but Sylvia’s dead. Deader than a doornail. What’s sex got to do with it? Does dreaming it make it kosher? Does necrophilia get a feed ride—even if it’s the White Goddess disguised cleverly as your Halloween Surprise Night of the Living Dead Hubby? C’mon, please give me a break!!!

On the third visit, Hughes is at home in a house he describes as “ruined.” Poor Ted—you’d think a Poet Laureate with plenty of Sylvia’s royalties coming his way could do better than that? A dive—a ghetto dumpy ruin? Naturally Ted’s naked (ho-hum, as if anybody cares)—running a bath, when Sylvia sneaks up behind him. Now she’s young and vivacious—ready to get it on. She’s more beautiful (naturally)—then he’s ever known her, and more “alive.” She “accosts” him—grabs him by the you-know-what. Unfortunately, Ted’s not young anymore—like born-again Sylvia. All he’s got is a—skinny Turkey gobbler with a scrawny neck.

According to Middlebrook, it’s while Hughes is “naked, vulnerable, undefended, receptive to her summons”—that he realizes that he’s been victimized by both Plath and the sublime being of The Goddess. The three episodes correspond to his shaman’s journey: a summoning by female spirits; an ordeal in the female underworld; and a return to his new butchy muy macho body!!!

Posted by pugetopolis at 5:30 AM