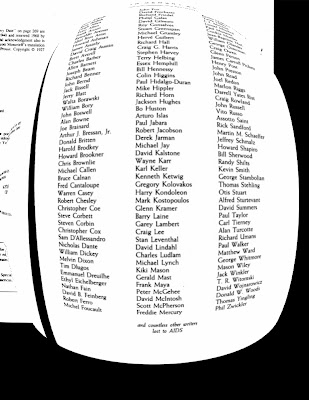 “The biggest change is tragic.
AIDS hovers over many of
these stories and is the
driving force in one. Essex
Hemphill died before this
book went to press.”
—Patrick Merla, Boys Like Us:
Gay Writers Tell Their Coming
Out Stories, New York: Avon, 1996

We lost many gay poets & writers during the ‘80s, ‘90s—all the way up to now in 2009. When Patrick Merla’s Boys Like Us was published in 1996, I opened it to the Dedication page and there they were—144 dead poets and writers.

The Dedication page was & still is like a deadly Found Poem for me—completely different than the coming-out stories. The List had 3 columns—stretching down the page. The names weren’t just words—they were people. Many of them I’d read—and I still have their books. Writers like Walta Borawski, Essex Hemphill, Paul Monette, John Preston, Vito Russo, Assoto Saint, Randy Shilts, George Stambolian, George Whitmore and David Wojnarowicz. Others like Steve Abbott and Richard Hall had read my books—and reviewed them in The Advocate & The Sentinel.

What is gay lyric recovery? Is it rereading the List of names in Boys Like Us? Rereading their work—their poetry, fiction, essays, film reviews, editorials and obituaries?

Is that gay lyric recovery? Or is it something else?

“I wanted to redefine lyricism, not as an expression of internal sentiment, but rather, as the creation of a new emotion that takes shape only through worldly matter and through words.”—Michel Collot, (Prétexte 21/22) Revue Prétexte

And so that’s what I wanted to do with the obituary List in Merla’s Boys Like Us—to redefine gay lyricism with the names themselves by morphing and transforming them into something beyond the obit page into a different kind of online lyricism.

Posted by pugetopolis at 2:20 PM

Not only gays need lyric recovery!


I wish Collot good luck with his desire to create "a new emotion."

If we can rehabilitate poetrys' emotional life that will be enough for me.

I'm only speaking for myself, a snarky voice in the straight wilderness.

Go ahead and save poetry for the rest of the world. I don't care.

I write myself, as Gertrude Stein says, the rest of the world can f**k off.