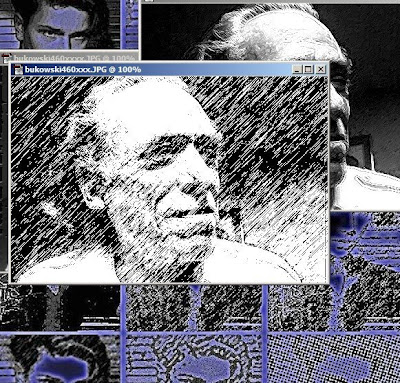 bukowski / black sparrow / apple
“my man, you think,
you’ve saved yourself
for somebody else, but
who?”
—Charles Bukowski,
“liberated woman and liberated
man,” The Pleasures of the Damned

“Most successful commercial writers know what to attack and when. And even the Artsy-Fartsies who are touched upon with the Nobel and Pulitzer prizes, they too are screened for any dangerous signals of individuality. “—Charles Bukowski, Selected Letters—Volume 4 (1987-1994), London: Virgin, 1999.

The Blogosphere—and especially You-tube—has changed things. What began as samizdat lit and desktop publishing (DTP)—has morphed into a slithering online monster with a million medusa heads. They say hundreds of new Blogettes are being spawned everyday on the I-net—obviously an important media development.

Broadband and bigger memory chips have morphed the Blogosphere into the You-tube venue—accelerating the death of books and bookstores and publishing as we know it. Online publishing is now derigeur—as the old system of submission, editors, galley proofs, printing, cutting, binding and distribution morph and fold into new venues. Ask Silliman—he knows

“Well, the electrician hooked up the computer… I’m still getting the feel of this thing but I think all in all, it should make the work luckier. Of course, the computer can’t create but I like the look of the line as I go along and I think it all aids in the way the words flow and play around.” —Charles Bukowski, Selected Letters—Volume 4 (1987-1994), London: Virgin, 1999, p. 64.

What does computing mean for poets? Bukowski got into computers early in the game in 1990 when his wife got him a Macintosh, some MacWrite software and a laser printer. It didn’t take long for him to get into it. What Bukowski got into—was a different way to write. He traced the way he moved from typewriter to computer in his correspondence with John Martin his Black Sparrow Press publisher and his various writer friends. Following this thread in his Selected Letters is interesting. It retraces what many of us already know—except Bukowski was doing it in the early ‘90s.

“The computer still seems like a new toy and I can’t stay away from it. I’m sure it will get to be old stuff after a while and we’ll get back to normal. You know, I can get an addition to this thing and if you have this other thing up there I can send the stuff up to you at the moment I type it. But we don’t need that unless the mails fall apart. The world gets stranger.”—Charles Bukowski, Selected Letters—Volume 4 (1987-1994), London: Virgin, 1999, p. 65.

During the early ‘90s Bukowski adapted himself to the electronic Word very quickly—working his way thru the early glitches and hardware-software problems of those days. Rather than Mac, I personally went thru the Windows software changes( 3.1, 95, 98, 2000, etc) and into the laptop stage from desktop clunky cathode-ray screens. Now I use a tablet and Vista…a long ways from the days of floppies and flipping out.

“I was just clowning. I’m sure you know. A computer is nothing but an instrument. It has no idea how to write a poem, a novel, etc. And most people with computers are at a hazard, most computer people have been gulped away by something awful. I resisted a computer for a long time for fear of going with this death gang. In fact, I didn’t get the computer myself. It was an Xmas gift. Blame Santa Claus.”—Charles Bukowski, Selected Letters—Volume 4 (1987-1994), London: Virgin, 1999, p. 69.

This “death gang” thing Bukowski mentions. What is it? Or what was it? This resistance to digital technology—was it a kind of Luddite metaphysical angst and fear of computer virtual reality as opposed to IBM Selectric typewriters smashing ink onto the dead skins of trees?

“I have a small smile and the words leap onto the computer screen and I’m as young as I was then. There’s no vanity attached, no wish for fame, just my guts pumping with the Word, on more, some more, the way I want it, the way it should be. Anyhow, a computer easily beats a typer in spite of the accidents. You just jump back in and let it roll again. I love this thing. It’s a mad, magic fountain. As time goes on, computer errors will decrease to an extent which will be almost non-existent.” —Charles Bukowski, Selected Letters—Volume 4 (1987-1994), London: Virgin, 1999, p. 89-90.

As the letters progress, Bukowski moves further into the Word—the digital Word as opposed to the analogue Word. The former is an interactive screen—the latter is a Guttenberg antique.

“I use a Macintosh IIsi. MacWrite II. Software 6.0.7. I don’t know anything about computers. My wife got me one for Xmas ’90 and I used it basically as a typewriter. Have gone to computer class, read some manuals, still an amateur. What the computer has done is to allow me to write more. Now, “more” isn’t any good if the quality doesn’t hold but with me (forgive this) it has not only held but increased. It’s a bigger party now, more fun, more fire. I used to get drunk one night to write the stuff then get drunk the next night to correct it. Carbons, cross-out ink, new ribbons, new erasing tape, etc. Now, I do it all in one night, correct the shit tight on the screen, run it off, store it for god damned eternity and mail it out somewhere. The keyboard sizzles and sings and laughs and there’s even different typefaces to fit one’s god damned mood. Chicago is best when you’re burned out and thinking of the razor against the throat or the car off of the bridge. I generally prefer “Palatino” because it makes me look like a better typist.—Charles Bukowski, Selected Letters—Volume 4 (1987-1994), London: Virgin, 1999, p. 127-128.

Bukowski works his way thru the digital Word—learning to sidestep the glitches and ditching the old print technology of carbons, ribbons and paper.

“For a guy who used to hand-print his stuff I’ve gotten pretty frigging fancy. But I measure the total work and how I feel about it. I never worry about editors or readers. Never have. I get out to keep what sanity I have. There is something about seeing your words on a screen before you that makes you send the word with a better bite, sighted in closer to the target. I know a computer can’t make a writer but I think it makes a writer better. Simplicity in writing and simplicity in getting it down, hot and real.” —Charles Bukowski, Selected Letters—Volume 4 (1987-1994), London: Virgin, 1999, p. 128.

I went thru this stage too—getting interested in zines. The technology was there—Microsoft Publisher and Word. My cut was a standard 10% royalty. The samizdat chapbooks ended up in many university rare book rooms.

“When this computer is in the shop and I go back to the electric, it’s like trying to break rock with a hammer. Of course, the essence of the writing is there but you have to wait on it, it doesn’t leap from the gut as quickly, you begin to trail your thoughts—your thoughts are way ahead of your fingers which are trying to catch up. It causes a block of sorts. Indeed.” —Charles Bukowski, Selected Letters—Volume 4 (1987-1994), London: Virgin, 1999, p. 129

It was a very liberating thing for me—holding in my hands a book conceived and put together for myself. It was quick—it gave me an immediate sense of satisfaction. Immediate gratification—in the Freudian sense. I look back on the chapbooks of many writers like Herman Hesse and the zine-revolution poets—there are magazines and books that trace the history as well as the appearance of such samizdat lit. Bukowski was lucky to have Black Sparrow Press—the story of how that lucky break happened is told in Barry Miles’ biography of Bukowski

“He found that if he stayed away from the track then he got nervous and depressed, he became irritable and when he came to sit before the Macintosh, there were no juices there to fuel the writing. He needed to look at humanity: “and when you look at Humanity you’ve GOT to react. It’s all too much, a continuous horror show.” He was bored at the track, he was terrorized by the people there, he genuinely hated crowds, but he was a student: “a student of hell.” And so he continued to point the Acura Legend towards Hollywood Par and its seething masses.”—Barry Miles, Charles Bukowski, London: Virgin, 2005, p. 261.

Being a student of hell—there’s a long history to that. Last night I was reading Rimbaud’s A Season In Hell—a sort of X-ray analysis of Rimbaud’s relationship with Paul Verlaine. I was reading Rimbaud because of his connection with the French Symbolists and how they influenced T. S. Eliot and his The Waste Land. The new POMO lit crit about Eliot (Miller, Peter, Seymour-Jones, Koestenbaum) has opened the “personal” Waste Land of Eliot into homosocial areas of poetics more relevant to gay writers. The Waste Land isn’t just a straight or closeted Waste Land—it’s a “personal” Waste Land that has homosocial dimensions as well.

“When I sit down at the machine, I have no idea what I am going to write. I never liked hard work. Planning is hard work. I’d rather it came out of the air or some place behind my left ear. I have found that I am in a trance like state when I write.” —Barry Miles, Charles Bukowski, London: Virgin, 2005, p. 261.

Without all the paraphernalia (paper, ribbons, correction inks, etc.)—it’s easy to see how a writer like Bukowski can concentrate on his writing more intently and let the “trance” between himself and poem be more real and immediate. Does Bukowski’s poetry during the early ‘90s reflect any computer influences? According to Barry Miles his biographer, Bukowski’s poems become more like those of the Chinese poet Li Po—about “overheard conversations, observed situations, little events, his cats playing, words spoken, words heard, subtle nuances and fleeting shadows.”

“I am fed words by things that I am hardly aware of. This is good. I write a different kind of crap now. Some have noticed. The words have gotten simpler yet warmer, darker. I am being fed from different sources. Being near death is energizing.” (261-262)

“I am not sure that I explain anything in my writing but I do feel better for having written it. To me, creation is just a reaction to existence. It’s almost, in a sense, a second look at life. Something happens, then there is a space, then often, if you are a writer, you rework that happening out in words. It doesn’t change or explain anything but in the trance of writing it down, a rather elated feeling occurs, or a warmth, or a healing process, or all three, and maybe some more things, depending. Mostly when I write something that works for me, I get a very high feeling of good luck. And even in purely inventive work, ultra fiction, it is all taken from basic factuality; something you saw, dreamt, thought or should have thought. Creation is one hell of a marvelous miracle, as long as it lasts.” (262-263)

Posted by pugetopolis at 8:07 PM