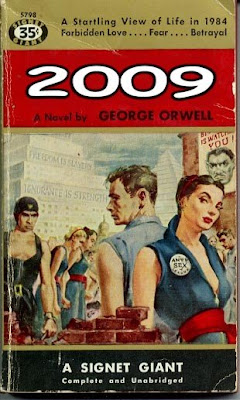 "It was a bright cold day
in April, and the clocks
were striking thirteen."
—George Orwell, 1884

Playing it up as she always does—
With her sophisticated sardonic ironic candor
Doing her “The Spy Who Swished in From the Cold” skit,
Little plot twists with dumpy Miss Orwell’s snarky Theme,
Giving the Nightmarish Storyline a tinsey-wensey tiny-bit
More modern campy Melodrama to keep the dreary
Dystopian Drag routine going for awhile longer…

Actually tho, my dears, am I too gauche saying—
Isn’t Orwell’s premise a retro sci-fi flight of fantasy—
His world of 1948 looking into a neo Fifties Future?
Isn’t that how Film & Fiction work? Gazing back then
Thru a kind of fuzzy film noir Bijou ‘50s glass darkly?

Cheer up tho, my fellow astute cineastes—
There’s plenty of time, my dears & at least a 5-minute
Intermission, giving us couch-potatoes some wiggle-room
For one more Hollywood version to spawn—all the way from
Netflix to John Hurt’s Alien & Lynch’s Mulholland Drive…