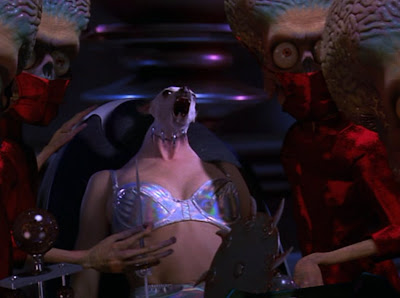 WASHINGTON—Gossip is gushing throughout the busy beltway this weekend—with the news concerning the latest Martian attack on humanity.

Stem-cell researchers banned from genetic engineering research were shocked to find out that Martian-Earthmen transplant experimentation has been going on for many years.

A bootleg youtube copy of a hair-raising Martian secret laboratory scene from an orbiting UFO has all the bloggers & slackers on the Internet gasping with disbelief over footage from a bloodcurdling shocking transhuman transplant scene up until now thought to be impossible.

The Sarah Palin-Chihuahua transplant film clip is so disgusting yet promising—that Senator McCain has volunteered to be the first politician (that we know of) to undergo the somewhat risky Martian transplantation process so that he can truly become the Pit Bull he’s always wanted to be.

Other volunteers are flooding the Space Command Headquarters in Hump Tulips, WA with requests for Martian human-animal transplants involving not only dogs but horses, elephants, weasels, favorite family pets.

Apparently, secret Martian Exo-transplantation experiments have been going on for quite some time. Especially in Rome, where rich randy Italian politicians have paid millions for a new lease on Family Life and out-of-this-world unique procreation pleasures…

Posted by pugetopolis at 9:07 AM