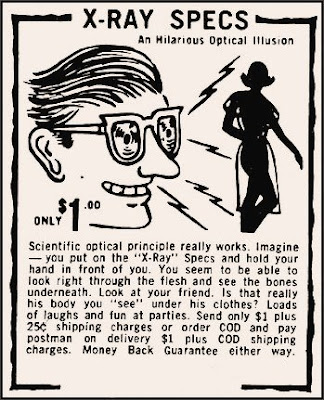 “I was the shadow of the waxwing slain
By the false azure in the windowpane”
—Vladimir Nabokov, Pale Fire

Yes, folks, this is the one & only way to overcome the heartache, disillusionment and depression that comes from Unreliable Narrators.

Buy a pair of these marvelous X-Ray Glasses right away before the Election—and you’ll be able to see the Truth, the Hole Truth & Nothing but the Truth as far as your Favorite Politicians are concerned.

These X-Ray Glasses work well with Literature as well!!! Get rid of those pesky no-good unreliable narrators like James Frey with his fake druggie biography A Million Little Pieces.

Better yet save time & money from having to pick sides between 2 unreliable narrators—like Professor Shade and Professor Kinbote. One writes bad poetry about life & death while the other says she’s an exiled queen from Zembla!!!

Shade says “Today I'm sixty-one. Waxwings are berry-pecking. A cicada sings.” But we know he’s lying thru his teeth—Shade doesn’t even exist does he? One quick look thru these X-Ray Glasses—and sure enough it’s all a figment of that Zembla Queen’s sick imagination.

The X-Ray Glasses come highly recommended by Elportinito who sayz they work very nicely on the beach on weekends—as well as at work. These glasses come with a one-year ogle-free guarantee—no matter how bad a voyeur you are!!!

But these X-Ray Glasses are especially helpful for literary critics in The New York Times and Academe—those on the constant lookout for writers who steal their work & ideas from other authors' books, refusing to shed light on their own pallid glow imitations—compared with the heat and blazing light that a Shakespeare radiates over the landscape of English literature.

“In fact the title Shade lifts from Shakespeare also puts a highly ironic twist on the whole practice of purloining another's phrase, since it wittily steals from Timon's denunciation against universal thievery. Even that self-deprecatory "some moondrop title" (a moondrop, Webster's Second notes, is "a liquid of magical potency, supposed to be shed by the moon") subtly echoes Timon's image, and like the whole passage from which the title comes, harks back to the images of reflection that open the poem.” —Brian Boyd, The New York Times

I remember those x-ray glasses ads; they appeared in all the superhero comicbooks that mattered and (of course) MAD Magazine.

Remember the ventiloquist ads? "Learn How to Throw Your Voice." I fell for that one, hook, line, and sinker.

For my 25 cents, I received a cheesy booklet with obvious instructions (even for a 10-year-old). The booklet came with a leather thingy that you were supposed to bite down on while talking ("throwing your voice"?).