The Desire and Pursuit 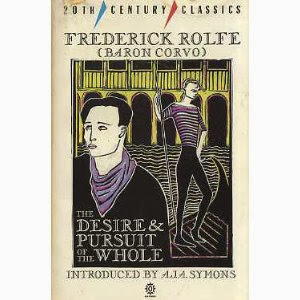 THE DESIRE AND PURSUIT OF THE HOLE: A ROMANCE OF MODERN VENICE

“Truth is tarter than taradiddles;
and nothing is tarter, terser, than
truth on the track of tired trash
in a trance.”—Frederick Rolfe,
Baron Corvo, The Desire and
Pursuit of the Whole: A Romance
of Modern Venice

It said much but signified nothing—
Hoodwinking, indulging in imagination

“How exquisitely horrible it is,” I said—
Something mysterious was happening

The Creepazoids were taking over—
Cretinism and idiocy on the upswing

People were manifesting defective things—
Like some abortion of the mind, lower IQ’s

They possessed not taste, smell, hearing—
Sight or touch, they were human imbeciles

I prefer them that way, my dear, for obvious—
And tell-tale reasons I shan’t get into now

Hadrian-esque pubic curls so entrancing—
His back, loins and shoulders so strong…