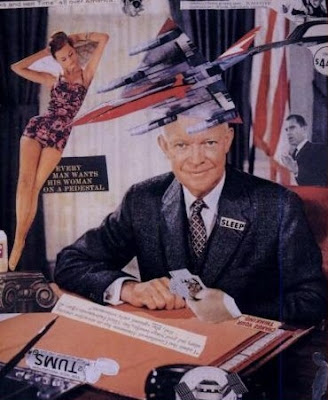 
there’s no getting up


to it by words you know”

● Both collages are “performances”—toward the Other or the Double Diva that is the true poet which Plath wants to be. Her Journals read like notebooks—meditating on how to achieve her goal. But discursive prose doesn’t do the trick. It takes poetry to make the “poet-in-a-poet” possible. Journal prose is simply “pulp fiction”—when it comes to actualizing the Double. 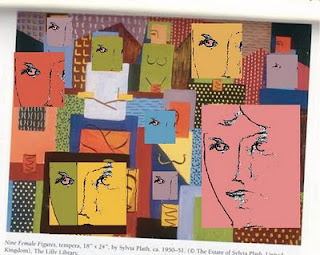 ● Plath portrays her Double gradually—as a coming out of the closet into a visible performative existence. “Nine Female Figures” shows how the Double gradually performs itself out of its sketchy collage background—into the more articulated Double in the foreground.

● The boxed-in sketchy closetry of "Nine Female Figures” moves from the background to the foreground completed portrait of Plath’s double—uniting both sides of her personality and poetry into a single complete face. 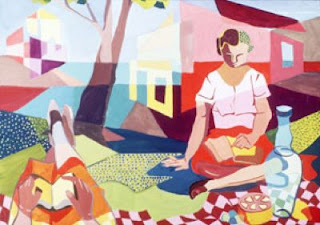 ● “Two Women Reading” does the same thing—except with a more synthetic cubist approach. Two women are having a picnic—both are reading a book. There’s no linear progression from fragmented self—to the Other. Instead both women are reading—what we’re reading. Both books are blank—but it’s not the books that the two women are reading. Instead the collage is reading-performance—giving us the Double’s perspective of what’s going on:


● “The composition of this tempera may also be seen as an unconventional conflation of cubism and linear perspective, techniques Plath had been studying for years. While cubism tends to flatten geometrical objects into multidimensional fields of monochromatic colors, often presenting multiple viewpoints simultaneously, this painting places vibrant, multicolored forms of shifting dimensions within a prominent two-point perspective. The scene is positioned from the viewpoint of one woman stretched out on the lawn, whose gaze is aligned with the viewer of the painting, blurring the division between the seeing eye of the creator and her audience.”—Kathleen Connors, “Visual Art in the Life of Sylvia Plath: Mining Riches in the Lilly and Smith Archives,” The Unraveling Archives: Essays on Sylvia Plath, ed. Anita Helle, Ann Arbor: U of Michigan Press, 2007

● Paraphrasing Robin Peel in Writing Back, a book that concentrates on some of Plath’s more political collages, one can see Plath’s 1) writing, 2) reading and 3) artwork as acts of a seriously deliberate and conscious performance art. First as conscious experiments in form and voice—as with the BBC performance of “Daddy.” Then as “writing back”—Plath’s rereading of her poetry, artwork and fiction as performed responses to the would-be controlling forces of poet-in-poet v. person-in-poet. These forces seem to be emerging from an as yet articulate “newness” libidinal level—the transgressive world of the Other, the hidden performance art of the Double, the subversive Doppelganger dishy bitch-goddess style of Ariel.

● This battle with the “Other” that is enacted in the later poems is seen primarily as a “gender or personal battle, ignoring the political legacy of Cold War McCarthyism, in which the enemy is internalized, and the Other is within America as well as outside. The Rosenbergs’ execution, with which The Bell Jar opens, is merely the most obvious metaphor for the process in which public events work on the private imagination.”—Robin Peel, “The Political Education of Sylvia Plath,” The Unraveling Archives: Essays on Sylvia Plath, ed. Anita Helle, Ann Arbor: U of Michigan Press, 2007

● “To guess the final significance of Plath’s use of the double, we must backtrack to her poetics. As we have observed, Plath’s true self was essentially her “creative mind (J 15), her interior “genius” that allowed her to feel an “intense sense of living richly and deeply.” Her false-self was everything that hid, blocked, stifled or defeated her creativity. Her true self was the one that waxed in the compositional process and waned when the process concluded.—Steven Axelrod, Sylvia Plath: “There Are Two of Me Now,” The Wound and the Cure of Words, Baltimore: John Hopkins University Press, 1990, 234

● It seems to me that Plath’s two collages “Nine Female Figures” and “Two Women Reading”—are early examples of how she was approaching the Double. The Double seems to be a constant preoccupation with her—from her early Diary entries addressed to “you”—all the way up through her Dostoyevsky studies at Smith—ultimately to the conception, realization and deployment of Ariel as her ultimate Other.

● “Plath seized the poetic act itself as her most desired double. In one sense it was her opposite: in literary creation she felt alive, whereas in all other times she felt dead. But in another sense the poetic act replicated as a pretext for her word making, as her mentor Lowell claimed to do (“In Conversation” 19). Yet even if the analogies between life experience and art were only pretext, the autobiographical matter finally loomed large, laden with power. And the analogies were undoubtedly more than just pretext. They helped Plath to libidinize language; to fulfill her need for osmosis with someone or something outside herself; and to construct a regulated self-image in a realm of freedom.”
—Steven Axelrod, Sylvia Plath: “There Are Two of Me Now,” The Wound and the Cure of Words, Baltimore: John Hopkins University Press, 1990, 234

● “Two Women Reading” has two women reading during a picnic—one reader fully depicted while the other reader only half-depicted. As we read the readers reading—we perhaps become the reader in the foreground with our line of sight lined up with her POV toward the other woman as her double. The books are doubled too—both blank. Instead of a collage “analytical” cubist linear progression of 9 different views of the self in “Nine Female Figures” progressing toward the Double—with “Two Women Reading” there’s a more integrated cubist “synthetic” depiction of the double-experience visualizing what Plath later does with Ariel.

● Robin Peel in his “The Political Education of Sylvia Plath” in The Unraveling Archives: Essays on Sylvia Plath makes the distinction that Plath’s Double wasn’t all gender politics and empowerment of the Other.

● This so-called struggle with the “Other” that is enacted in Plath’s poetry, fiction and collages—when seen as both gender & personal struggle, as well as the political legacy of Cold War McCarthyism internalized as the Other within America as well as outside—documents Plath’s political education undergoing a sudden acceleration in England in 1960s…her post-1960 experience involving a reassessment, revival, and restoration of a dormant political engagement, culminating in the Ariel sequence.” (TUA 39-40)

● In addition, Peel’s Writing Back: Sylvia Plath and Cold War Politics (Madison: Dickinson Press, 2002) goes into even more details describing how Plath’s Arielesque politics suddenly pushed her poetry forward—after disenthralling herself from the Hughes “Big Daddy” Electra complex that both stimulated and restricted her poetic Double. The cover of Peel’s Writing Back illustrates another “Big Daddy”—Eisenhower at his desk, surrounded by kitschy images of sexy models, Tums tablets, the Queen of Spades with some playing cards and the gruesome haunting image of Richard Nixon looming up in the background. This political collage of 1960—shows Plath’s increasing awareness of the Double’s dark side and the dystopian context of the McCarthyism years and the Cold War of Korea, Viet Nam, Iran, Iraq and now Afghanistan-Pakistan.

● Plath’s 1960 political collage is more politically aware than her early ‘50s collages of women—but her Feminist poetics and politics were really never separated. They merged together—creating what makes Arial’s voice so “new.”

● “The essential voice that is released, like Ariel from his pine tree, is either androgynous, like Shakespeare’s Ariel, or the voice of unmediated woman. Plath is Venus, Sapphic, Lilith, the Earth Mother, the female principle, the winged lioness. Plath’s achievement lay in writing about women with a clarity and directness that had not been achieved before.”

● Plath praises Anne Sexton’s All My Pretty Ones for being womanly in the greatest sense” and “blessedly unliterary.” Poems such as “For God While Sleeping,” “Letter written during a January Northeaster,” “The Black Art,” and “Lament” with their exploration of absence of a former lover, questions about what it means to be a woman writer, and the remorseless indifference of nature to human suffering.”

● Plath like Sexton starts consciously writing directly as an Arielesque “literary entity”—as Jacqueline Rose describes her post-structuralism approach to biography-writing in The Haunting of Sylvia Plath—and the fascinating discussion she has with Janet Malcolm at the end of The Silent Woman. Seeing subjects, books, poems, collages, letters, commentaries, criticisms—as separate “fragments” of an ongoing open-ended non-discursive non-linear narrative without closure is a method equal to the collage poetics of Plath in Ariel and much of her later work.

● This collage-poetics and dialog with the Other—is a new language that’s no longer controlled or embedded as a reaction to male patriarchal agenda poetry. The kind of poetry set in Modernist motion by the Pound Era—contrary to the early Sapphic Modernist poetry canon of Gertrude Stein, Mina Loy, Djuna Barnes, HD and Natalie Barney.

● “In recent feminist readings, where gender itself is seen as a social construct or performance (as argued by Judith Butler), Plath’s later work can be seen in part as an acting-out, or unraveling, of that performance. Jacqueline Rose develops a similar argument, and Susan Van Dyne also considers the performative element in her study of Plath’s poetry. Many of these debates about gender, subjectivity and language are brought together in Christina Britzolakis’ Sylvia Plath and the Theatre of Mourning, in which Plath’s poetry is read as psychic theater.” (Peel, Writing Back)

● This performance aspect unravels the myth of monolithic memory. The Plath archive itself becomes an open-ended mélange performance—a Foucault “mass of things, spoken and unspoken, conserved, valaorized, re-used, repeated and transformed.” Plath’s oeuvre—isn’t like other oeuvres.

● Collage fragments become palimpsest tools for making texts more unstable and dense like Ariel. Plath’s poetry and the Plath archive involves a revised paradigm of “collage composition”—reflecting Plath’s interest across several decades with surrealism and the arts of collage.

● Finally there’s Plath’s wicked tongue—the thing that upset Dido Merwin so much with Plath’s poem “Face Lift.” Enough to cause Merwin to write a long rambling bitchy sarcastic “Dido dish” of Plath as Appendix II in Anne Stevenson’s Bitter Fame. There’s nothing like a literary “cat fight” to bring to the surface things that most biographers hesitate to put in print. But after all, it was Plath who threw down the gauntlet—at least to the wounded pride of Dido’s perspective who claimed she trusted Plath too much with the details of her cosmetic surgery. But as Sylvia Plath’s Last Days and other more recent memoirs have brought out—there was cause for Plath’s satire since Dido was one of many admitted or hidden lovers of Ted Hughes the Gigolo Poet Laureate.

● This aspect of Plath’s bitchy, biting, wry, droll, ekphrastic attitude toward not only women who she perceived as “rivals” and “jealous Hughes competition”—had also much to do with the men in Plath’s life as well. Reading “Daddy” is one thing—but listening to the BBC performance is another. It’s not just a reading—it’s a furious, raging deliberately bizarre and eccentric performance with all sorts of funny shocking Hollywood cartoonish exaggerations and gallows humor worthy of a Berlin bunker or some of Beckett’s characters. Not all literary critics—can dish like Sylvia Plath.

Posted by pugetopolis at 7:17 PM