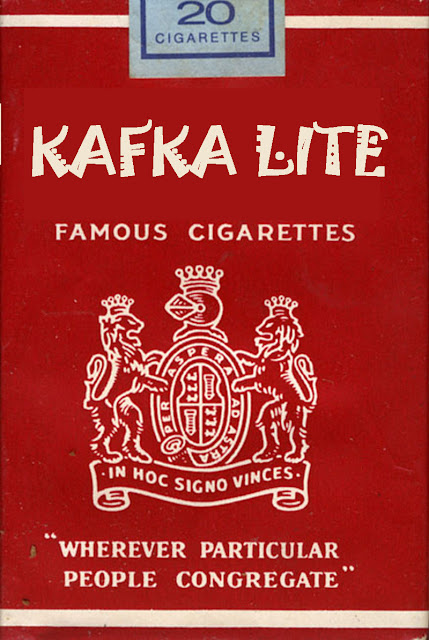 Much more 'kafkaesque' than you or I could ever want to be I suppose. After all who wants to be ‘kafkaesque’ anyway – you don’t have to be if you don’t want to be. On the other hand, if you’re a closet-case like the person in Kafka’s parable “Before the Law” – you may or may not enjoy being tres ‘kafkaesque’ and stuck in some proverbial closet the rest of your life.

The closet-case parable “Before the Law” is a quickie preview of what comes later on in Miss Kafka’s gay oeuvre - the tortuous treadmill of THE TRIAL and the even more tortuous transgressive transformations of THE METAMORPHOSIS. I don’t want to kvetch too much though – nor am I pretending to pull the ivy down from THE CASTLE walls of Yale University. Understanding Miss Kafka, Gregor Samsa & the other gay protagonists in Kafka’s various  ‘kafkaesque’ novels, short stories, parables & queer diary entries is a fairly easy exercise – in fact Miss Kafka hints, suggests, invites it.
________________

“Kafka Lite” is a phrase that sounds rather like some kitschy bourgeois cliché. And yet it’s like Franz Kafka posing in the nude as St Sebastian for the artist Ernst Ascher in his Prague studio.

As if the infamously enigmatic Miss Kafka could or would possibly reveal or divulge himself to anybody – just by posing nude in an artist’s studio. The Sebastian-esque pose is quite revealing though – a kind of burlesque ‘kafkaesque’ coming out of the closet portrayed in the parable “Before the Law.”
____________

What other self-revealing ‘kafkaesque’ portrayals exist down along the line of Miss Kafka’s oeuvre of coming out of the closet? Could the “Before the Law” trope be a key – to unlocking the closet-door of what it means to be a Prague Austro-Hungarian fin de siècle fag?

Miss Kafka worked as an attorney and insurance agent for the Worker's Accident Insurance Institute for the Kingdom of Bohemia. The job involved investigating and assessing compensation for personal injury to industrial workers; accidents such as lost fingers or limbs were commonplace at this time.
___________

Did Kafka’s work with the Worker's Accident Insurance Institute somehow train him to see himself as a typical legal-insurance “case” no different than all the cases he handled and was responsible for.

Does Kafka’s writing reflect investigating and assessing compensation for his own perceived personal injuries—accidents of more than just lost fingers and limbs?

Is there a cure or compensation for 'gay kafkaesque'?