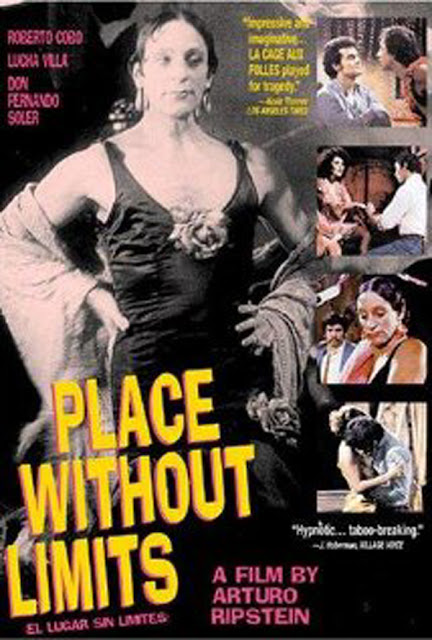 “overdone, like an
El Greco painting”
—Manuel Puig on
Arturo Ripstein’s film
Place With No Limits

Luis Buñuel says somewhere that rarely is film and poetry combined in such a way as to do what has to be done—such as what Buñuel did with his shocking Un chien andalou and chilling Los Olvidados (1950).

And then, I saw Cobo in drag in Hell Without Limits (El lugar sin límites) in 1978 almost 30 years later—and I felt strangely, exquisitely betrayed by the Mexican stud doing drag.

Like Manuel Puig toying facetiously with the idea of being betrayed by Rita Hayward in his novel—later visiting her toward the end in her last stages of Alzheimer’s—I felt the same way seeing Roberto Cobo doing drag in a run-down whorehouse in rural Chile.

How could Roberto Cobo so butchy and handsome in Los Olvidados—do a believable, sympathetic queen to a wider transvestite-loving audience? Cobo plays La Manuela in love with Pancho—a resentful young truck driver who she seduces in her brothel in Estación El Olivo.

The screenplay that Puig did for Ripstein portrays the angry, insecure stud Pancho—in a role I thought that surely would’ve been played by Cobo.

But instead, Gonzalo Vega plays the dumb, gullible, sexy stud Pancho—while Cobo gives La Manuel all the human depth that the author José Donoso did with his transvestite novel El lugar sin límites (Hell Has No Limits).

The problem was that Ripstein saw Donoso’s drag treatment as much too nuanced about machismo and sexual underdogs. He thought that Puig’s screenplay was trying to make La Manuel too exaggerated and Pancho too super-macho.

Puig, on the other hand, thought Ripstein’s camera direction was trying to reflect an inner drag life that tended toward “artsy” static tedium. Too full of psychological realism and expressionistic touches. Mirrors, dark interiors—it was much too oppressive for the joy of actually doing authentic drag tangos.

Puig had a bitch fight with Ripstein over the film’s climax—which had an ambiguous ending with the fate of La Manuel's drag seduction of Pancho. Ripstein replaced Puig with José Emilio Pacheco—who had La Manuel brutally killed by Pancho suffering from so-called “homosexual panic” which was simply too much for Puig.

Later Puig had the same concerns about William Hurt’s interpretation of Molina in The Kiss of the Spider Woman.

But even Ripstein, though, admitted that the best scene in Hell Without Limits—was the fatal dance that poor Manuela, decked out in a red feathery flamenco dress outlining his bony male buttocks, does for Pancho.

Posted by pugetopolis at 3:59 PM