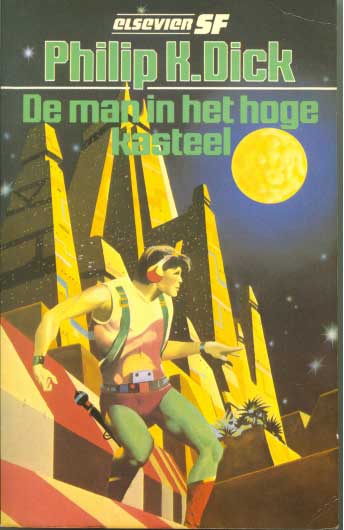 “The image of this hexagram
is the mountain, the youngest
son of heaven and earth.”
—Hexagram 52—Kên / Keeping
Still, Mountain, I Ching

Tagomi drove fast and smooth on the 20-lane, ten tiered new Embarcadero Freeway into SF. The City beneath him lit up like a Xmas tree—driving on it late at night when the traffic was light in his fast Jaguar, the feeling of gliding fast on the elevated expressway over the streets and precincts of the immense city could be almost transcendental. Like mainlining it in an artery—pumping through the heart of the universe.

Tagomi was wooing Tsukamato Kunio—about the 100 million yen being over budget. The Grasshopper Is Hung had turned out to be rather expensive. Philip K. Dick’s royalties had added a million yen—the whole film was getting costly.

“Even with CGI special effects, The Grasshopper’s ending up more than Blade Runner and Minority Report. Look at Scanner Darkly—it almost bankrupted me. We’re in a depression, you know, Tagomi,” the producer pointed out, “don’t forget.”

“Please, Tsukamato,” Tagomi crooned, “The Grasshopper is Hung isn’t a major sci-fi flick—it’s a skin flick, that’s all. We don’t need any major stars—that’s why we chose Abendsen. He’s not a major actor—we’re saving plenty. What’s a couple of million yen for a potential “Big Tuna” getting his rocks off?”

“Still,” Tsukamato sighed into his cellphone, “This is it. No more.”

All the way to Japantown, Togami had worried about Spencer. He was worried about the kid—he’d been having more and more blackouts. They weren’t really blackouts—they were more like sudden voluptuous daylight wetdreams. Embarrassing yet seductive wide-awake nocturnal emissions—involuntary orgasms in front of the cameras. They’d kept filming anyway—it added just the right shocking Buñuel-esque surrealistic touch to the script.

Spencer Abendsen couldn’t help it—he was Kên the youngest son of heaven and earth. He tried being a decent boyish Buddhist—letting the young male principle ebb away slowly through him in a calm steady movement into nirvana. But more often than not, it wasn’t a gentle sluggish flow of male energy—it was more like a sudden gushing fire-hydrant spurting uncontrollably along some street in New York City with everybody playing and cooling off in the gushing fountain during a hot summer day.

But still, Tagomi felt more and more estranged from The Grasshopper film. As if he weren’t the director anymore—somebody or something else was directing the shots. Maybe the shooting schedule and whole AV film business had been too much for the kid. He didn’t seem to understand who he was sometimes.

Hexagram 52—Keeping Still wasn’t easy for a young eighteen-year-old man in a city like San Francisco—a Baghdad by the Bay, a Sodom and Gomorrah City of Forbidden Pleasures. Spencer didn’t seem to understand the script—it was like somebody else was reading and playing the lines instead.

Spencer seemed ready, willing and able to be a decent actor—and Tagomi’s crack film crew knew what they were doing. Tagomi certainly knew his own business. But The Grasshopper didn’t seem to be a typical American teenager—nor was the flick turning out to be a Utamaro Kitagawa satire like Togami had intended.

Tagomi shook his head—buried in thought walking back to his office. If Hexagram 52 signified the end and the beginning of all movement—then surely it was like yoga or bodybuilding. Spencer’s body, his back, his toes—his calves, his stomach, his hips, his jaws, his heart. All of these things that made up young Spencer Abendsen in the here & now—surely the kid had to be still like a mountain. And let the other world flow into him—and him into it?

Tagomi heard Tsukamato kvetching on & on in the background—but he was thinking about what his nephew had said about Spencer lately. He was smoking too many Rising Sun cigarettes and taking too many happy pills. He was spending all his time making love to Juliana Frink—or playing with himself in bed looking up at the ceiling. He was awake—but he was dreaming. He was asleep—but his eyes were open. Neat trick.
Posted by pugetopolis at 9:42 PM