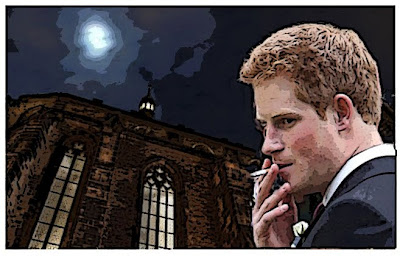 “There was something
about the guy that got
me”—Raymond Chandler,
The Long Goodbye

“But today the past is
dead, transformed into
a packet of well-worn
and thumbed glossy
images”—Fredric Jameson,
Archaeologies of the Future:
The Desire Called Utopia
And Other Science Fictions

The first time I laid eyes on Prince Harry he was drunk in a Rolls-Royce Silver Wraith outside the terrace of The Clarence House.

He was plastered to the hairline—but otherwise he looked like any other young guy in a dinner jacket who’d been having cocktails with the Queen.

A girl sat beside him—she was driving. His foot was dangling outside the door—just hanging there. He had a distant smile—and he wasn’t feeling any pain...

Harry shrugged—as if he weren’t going anywhere. I was visiting a friend—I stopped anyway. Even though it wasn’t any of my business. I stood there.

I got him outta the Rolls-Royce & up the stairs.

It’s not often one gets to help the third-in-succession to the Throne up some stairs, through the door & into his Clarence House bedroom.

I plopped him down in bed—no nonsense about it.

“Sure,” I said cynically. Wasting my time on a royal lush, it was still a waste of time though.

He was already half-asleep.

“You’re the most royal drunk I ever met,” I said.

I stood there, looking down at him. I couldn’t help myself—I leaned down & kissed him. I was a sucker for cute redheads.

I got a call the next day from his girlfriend. The chick driving the Rolls-Royce. Harry wanted to thank me.

He told me he had tendencies. He wanted to explain.

“How come I’m here?” I asked, looking around.

He shrugged, “You tell me.”

He looked bored & still woozy from the night before.

I told him my name, that I’d been visiting a sugar-daddy, Lord Barebottom down the hallway.

I shrugged, sipping the gin his girlfriend offered me.

A gin bottle, some melted ice in a bowl, an empty fizz water bottle were on a tray on the night-table by the bed.

“You can do better than that,” he said.

He pulled back the sheets & gave me a look. That’s how we ended up tricking in bed the first time.

Afterward, there was a knock on the door & in came guess who? That old lizard Prince Philip. He looked at me, then at Harry.

I knew he was serious. Slither queens are mean. They hate humans. I got my pants on fast & was out the door.

I didn’t look back. That lizard thing was weird—Reptoid morphing always gave me the creeps.

Later Harry called me later on his cellphone.

Most of royalty were Reptoids—I knew that already. The blue-blood breeding of the British Snake Mafia was no big deal to me. The Euro-jetsetters were all pretty much into the game. Same with the Jap Yakuza gang. There were 13 lizard mafias on the Forbidden Planet...

Harry wasn’t human like me—he was more like his brother. He got off on my normal naked ape sensuality. He was bored with the same old usual cold-blooded, bloodthirsty Night Crawlers.

I was kinda a Slither Queen myself though. I was kinda like Maria Montez—I was a Size Queen. The British Isles were like Cobra Island to me—I couldn’t get enough. It was just business though—I was just a cheap lowlife hustler.
____________________

It’s disgusting I know—but what else is new? Knowing that we are all lizard android descendants down the line—I was just another half-breed lizard boy that's all. So what? All that trash DNA inside me—it only made me more who I was. De-evolution all the way back to the Jurassic...that was the name of the game.

All that Reptoid junk in my genes—I was just a snake distant cousin. Not as bad as Harry & William though—or the Queen I suppose. I wept about it sometimes—what a lousy exopolitical racket. It makes me wanna vomit—I probably will just thinking about it. Don’t rush me—gimme some time. After all, this is a skanky True Confession…it isn't pretty.

The slinky snake in Harry's reptile brain crawls down—down into Harry’s dark lizard-hood joint inside me. I’d be lying there in bed—feeling the dark lizard lord sliding in & out through my guts. I hated it so nice...

I’d have these disgusting nightmares—more nasty than anything imaginable. My own shameless Heart of Darkness—talk about juicy Congo wetdreams.
____________________

I felt skanky—like a snake. I was sweating—my hands got clammy. I could smell Harry’s anaconda bad breath—as he gnawed my neck & stuck his forked tongue way down my throat.

He did me slow & easy—there wasn’t any hurry. Rome didn’t fall in a day—the British Empire wasn’t going anywhere fast. It’s lucky I wasn’t a chick—the last thing I needed was that. Giving birth to a lizard kid...talk about Night of the Iguana.

I yawned afterward—smoking a cigarette, gazing slit-eyed up at the ceiling. I had slug tracks on my lips—and tattoo hickies on my neck. Prince Harry was passed out again—the newlyweds were in Canada.