Darker Than You Think II 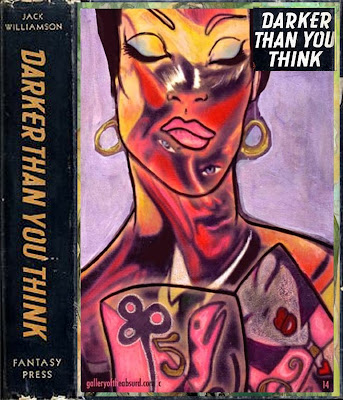 Darker Than You Think II

Afterwards, the Snake Kid turned his face toward me. Smoking a cigarette as I watched the Arkham landscape slide by us. He gave me a cool, bored look—her eyes were pale-green & slit-slanted. I could feel a cold shudder of intuitive alarm running thru me—as I was becoming aware of some strange kind of illogical attraction.

Had I been hypnotized by his Snake Eyes—there in the back of the limo? I couldn’t remember everything that happened during that long night drive—although of course I felt completely drained of energy. The Snake Kid must’ve got me—in one of my more weaker moments. He was better at shapeshifting than me.

I’d always been somewhat cynical toward human beings for a long time now—considering myself immune by now from ever liking or loving any of them. Their progeny—my young Miskatonic University freshmen whether male or female—I didn’t find particularly challenging or charming. Amusing sometimes—but only somewhat.

But the Snake Kid was different. He was cynical like me—he tolerated human beings as if they were some primitive sub-species. Unknowingly enthralled to the ancient Reptoid Elite. It was just business for me—sucking dumb young freshman human males off.

Although a couple of times—I actually thought it was the other way around. Lizard love for humans could get addictive—many of them were half-lizards anyway. At least down there between their legs—ever since the Fall from Eden.

A throwback lizard schwanz from the ancient cosmic war dayz—when perverse genetic engineering & DNA shameless boytoys had been grown in vats for the Lizard Elite. Like down in the TEMPCO underground bunkers & sex laboratories beneath Fuckushima— before the nuke fuck-up earthquake & tsunami.

Looking in his snakeskin pocket for a cigarette—the kid appeared modishly severe, but plainly expensive. He’d cunningly chosen me as the one with the most to lose—so that he could restore his bleached, famished, vampiric desires for the weekend. Before the long flight back home—to the Amazon rainforest.

Something to maintain his albino process—keeping his pale white skin-color & human-like complexion going for awhile. He preferred a big basket—with thick coils of wiry snakeoid pubes stuffed down there deep inside a man’s shorts.

“So you’re a leg man for the Arkham Gazette?” the kid asked.

He said it with a certain soft, throaty vitality that was mysteriously exciting, somehow revealing, yet his manner kept remaining casually impersonal. Crisp & vigorous—like somebody immune from getting a shot of semi-poisonous snake venom.

“Yeah, just a job,” I said, not interested much in Arkham business anymore or enlarging upon that modest fact. Not after experiencing more obscene enlargements & major seismic shiverings in my groin area when he grazed down there, getting what he wanted.

I wondered if the kid got off on the ones who truly heard the siren calls of Snakes—entrenched in darkness & hidden powers of evil long before he even made his move. The banksters and the boards of directors, the politicians and the preachers, the tenured faculty professors downstairs in Mondrick’s den—were these his usual prey?

We were in no particular hurry—putting the commandments of the Reptoids into practice, even though they'd become incalculably much more 'stealthy' than during Crowley's time.

Their genius had been to mouth the pabulum and the platitudes of Western liberal democracy—while sucking it dry down to its foundations. The Snakes worked literally around the clock to destroy human manhood, personhood and autonomy—while throwing humans off the scent with the mewling drivel of their babbling witch doctors, their televised talking heads and their postmodern puppets in the Professoriate.

“Was I Snake or human?” I asked myself.

Surely not all the way one way or other—that was just the usual anti-Reptoid rant. The one humans came out with all the time—almost like a knee-jerk reaction.

But confronting a stunningly goodlooking Alien Reptoid like the kid was completely different—it caught me surprised & unawares. As if I were suddenly standing there before him—completely naked like the dumb naked ape half-human half-lizard that I was…

The Snake Kid had me in the palm of his hand—and he knew it too… From then on when I said something silently to myself—I knew that he was listening to me. Even though he was yawning—bored with what I said.

He could hear me think. Everything I said to myself parenthetically—ended up more or less nakedly telepathically apparent to him.