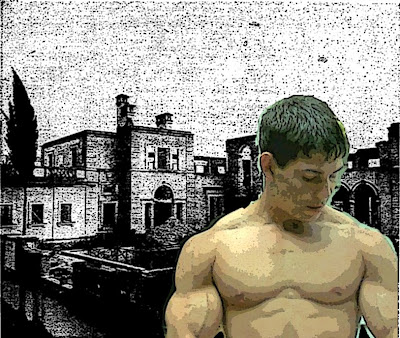 “Don Jerónimo and I
left for the capital on
the following day.”
—Jose Donoso, The
Obscene Bird of the Night

Bella bays at the moon…

Bella’s greedy—she wants it both ways. She’s in love with sullen Edward Cullen the bedroom-eyed skanky vampire—played by Robert Pattinson.

But she also gots da hots—for those werewolf boyz dontchaknow. She wants to suck & fuck both ways—what a greedy bitch. In between lays, she moans and groans. She pouts for penis—she howls at the moon.

“…I guess I’m just gonna have to chase her way.”

Jerónimo his lover yawns—turns over in bed. He could care less—they’d had a long night of rough trade werewolf-boy sex. He was drained dry—even the full moon couldn’t get him up anymore.

Then she scampers under Jacob’s window—settles down to bay some more. She’s unbearable—she doesn’t give up. Jacob can’t sleep.

It use to be he could just lie there—and listen to the silence of the night. When he couldn’t sleep—he would lie there in bed after sex with Jerónimo. And drift off to sleep—listening to the heavy forest silence out there.

It was heavy—because it was so thick out there. Thick with rotting trees and dying stumps—little spiders, termites, beetles worming their lives into the bushes and gnarled trees decaying out there. It was all a part of him—just like a minor little leaf out there in the cyclopean cyclonic darkness. Getting devoured—and annihilated by thousands of tiny teeth. He’d grind his fangs—just listening to it.

Each fallen leaf, each twisted twig—immediately attacked, covered with greedy hungry mandibles and mouths, devoured in a matter of minutes or hours. Thousands of generations of starved, famished bugs—burrowing tunnels into trunks of trees, oozing stinkin’ spittle, spreading the rusty blotch of nature’s pestilence and petulance throughout the vast deep wet rainforest. It was alive—it was hungry.

But the bitch plants herself under his window—and lets out another howl at the moon. Jacob gets outta bed—his boner tight up against his stomach. Jerónimo reaches for it—not wanting him to go. But Jacob snarls—he’s already morphing into Wolfboy.

“I’ll have to chase her away.”

He savagely ties the belt on his dressing gown—knowing what he has to do.

“I’m gonna sick the new wolfboyz on her,” he snarled.

Jerónimo yawns—he could give a shit.

Jacob lights a cigarette—slides open the balcony door. He whistles to the four black wolves. Naturally, that’s why Kristen remains at large—because the wolfboyz, four brand-new teen werewolves, are kept locked up there in the patio. Slumbering under the tall poplar trees—swaying beneath the full moon.

The young black teen wolves obey. They come out of the shadows—all stealthy, alert and alive. Their fangs unsheathed and ready to get down to serious business.

The flowerbed quivers in fear—as their soft paws cross thru the terrified tulips. The lawn beyond the gate—that’s where Kristen is still howling beneath Jacob’s window. They sniff the air—smell her scent. She’s doomed—but doesn’t know it yet.

Kristen cranes her neck—aiming her pointed snout at the midnight full moon. Everything around her hesitates—the things that grow and rustle and crawl and reproduce.

They all stop their nameless insectoid chatter—as the four werewolves start their own howl. Soft and plaintive at first—turning into an indecipherable male message. Jacob cuts it short and shuts them up.

He opens the gate—points to the bitch. He snaps his fingers once—and the young werewolves lunge for her. Kristen turns her head—too late tho to escape.

It only takes a second—there’s a jumble of snarls, slaver and bloody saliva. All paws, claws, blood dirt—it makes the hair on the back of Jacob’s neck get erect.

He has to catch himself—from shifting into young werewolf instinctual snarl. He holds himself back—soon it’s all over. It’s hard tho—for him to stay human. Once it starts—not even Maria Alexeevna Ouspenskaya can hold him back.

He lets them howl at the moon—the accomplice moon and their bloody murder show. The insects, the bugs and the worms of the dark forest—get ready to feast again. This time on—fresh pussy du jour.

Posted by pugetopolis at 4:39 AM