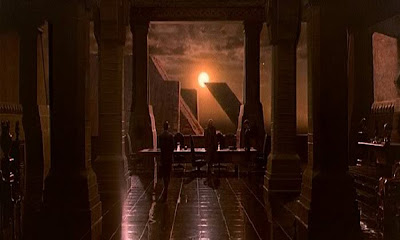 “Seated where he could catch
the readings on the two gauges
of the Voigt-Kampff testing
apparatus, Rick Deckard said…”
—Philip K. Dick, “Do Androids
Dream of Electric Sheep?”

“I’d never done a werewolf before,” I said.

Taylor Lautner looked at me and smiled. “Well, Mr. Decker, there’s always a first time for everything. You want me to take my clothes off now? Or later?”

I looked at him. He was probably one the most handsome young male actors I’d ever seen. There were plenty of young ladies and men everywhere—that would simply die to get their hands and lips on him. He seemed nonplussed & nonchalant about it.

His latest film “The Twilight Saga—Eclipse” had just debuted at all the cineplexes around town—a chic violent beefcake werewolf-vampire chiller-thriller about murder & mayhem in Seattle.

That’s where we were for the Voigt-Kampff test. The Gates Foundation and Microsoft Corporation had flown me up from LA—to test young Lautner. Coming down over Sea-Tac, I admired how exquisitely like an emerald jeweled pearl—the city of Pugetopolis glistened in the Sound and Elliott Bay with reefs of mountains on either side.

Lautner was probably one of the prettiest Nexus-6 droids on the fuckin’ planet—the most recent young matinee heart-throb of America, some critics would say. Nobody suspected he was a Nexus 6—but TPTB wanted to see if I could detect it or not.

I shrugged and said yes. I really didn’t care either way—whether he were a Nexus-6 or a young cute Werewolf. The occult and supernatural never did much really appeal to me—except as entertainment, like Bella Lugosi and Lon Chaney Jr. in classic Hollywood horror flicks.

I adjusted the small beam of white light—so it shone steadily into the kid’s left eye. He was just a young goodlooking chicken—maybe an android chickenhead at that. He reminded me of Hawk—the kid in Delany’s story. The Helix one.

I knew Nexus-6 droids were pretty expensive drone models—$50,000 or so apiece. Outta most people’s range—except for the Titan BP/Exxon oil barons out by Saturn beyond the goldmine asteroid belt. It got kinda lonely out there—dontchaknow? Not many chicks—just a bunch of methane rigs and mining camps. But like even butch trade needs a little love now & then…

I adhered the wire-mesh disk to Lautner’s cheek—he seemed calm. I told him how the test works—how I’d outline some simple social situations. And ask him to respond as quickly as possible.

His verbal responses weren’t what counted I told him—it was solely his eye-muscles and capillary reaction I used as indices. I looked down at the list and chose the first quesion:

“In a magazine you come across a full-page color picture of a nude girl.” I paused.

The gauges registered a little bit. Not much tho.

“The girl,” I added, “is lying facedown on a large and beautiful bearskin rug.” Lautner shrugged, yawned.

The gauges stayed the same—barely wiggling. An android response. Not detecting the major elements—the naked girl or the dead animal pelt. His—“Its”—mind was concentrating on other matters.

“A young man comes in the room. He likes the picture. He takes off his clothes—and masturbates.”

The gauges came alive—there’s some life in this android kid after all. Not a typical android response—getting an erection over a young humanoid male.

The gauges go crazy—zigzagging off the scale. Lautner feels himself up—looks at me.

“You’re in a mountain cabin—out in the woods somewhere. Above the fireplace is a mounted deer’s head—a full stag with developed horns. The cabin is full of young hunters. They get you into bed.”

The needle leaned on the right-side of the gauge and stayed there. It looked like it would bend outta shape.

He’s already morphing into a young wolf. His incisors get real shiny and moist—his peach-fuzz moustache takes over his face. His whole body gets covered with fuzz and he looks a little too serious. His shirt buttons pop—his zipper bulges.

“I get this hunger, sometimes,” the kid growls, looking at the pic. “You know, hungry for guyz with lotsa extra Pacific oyster stuff. Big, runny, juicy oysters—the kind that stretch and wiggle down my fuckin’ throat live & all wiggly. I like to gulp ‘em down, man, swallow ‘em whole.”

I put down my ballpoint, shut off the beam of light, removed the adhesive patch from his cheek.

“He’s an android, isn’t he?” I said to myself. “A gay one—but a droid nonetheless—that’s my conclusion from the testing. Definitely a new Nexus stud.”

The kid didn’t say anything. He took off his clothes—and we got down. Afterwards, smoking a cigarette on the director’s couch, he said, “We movie actors—although we try to act naturally straight in public, people aren’t supposed to know we’re really gay.”

I glanced outta the big picture window in that huge Microsoft bunker mansion—camouflaged on the cliff overlooking Lake Washington not far from Bellevue. The ceilings were old beams from some old historic lumber mill—the floor covered with thick expensive Persian carpets.

He got outta bed—walked over to the balcony window. He stretched and stood there—with his hands on his hips. He was good shape—from working out. He’d come a long way—since “Sharkboy and Lavagirl” way back when. He was still moody tho—a kind of petulant insolence you don’t see much anymore. Not with droids or mere humans anymore.

Although he scored as an android in my book—the whole butchy werewolf persona pretty much covered up for it. Nobody really cared about Voigt-Kampff tests anyway—the movie wolf packs were only interested in his six-pack abs and sex appeal.

I got up and put all my testing gear in my briefcase. I snapped the briefcase shut. I couldn’t make out, even then, how the Microsoft Corporation had managed to almost snare me—and so easily. Using his gayness—to cover up him being a droid.

A mammoth corporation like this—it encompassed too many people. It possessed a kind of group mind. An executive here—a suit there. My mistake, evidently, had been in viewing them as individuals. A mistake I’d try not to make again.

Some more suits came thru the door—a couple of minor execs. They got me in a corner. “Thank you, Mr. Deckard. For testing our Nexus movie star. Of course, the results are secret,” one of them whispered, pointing to a hidden camera in the bedroom ceiling.

“I’m sure we can depend on you—for keeping this all mum. Your Voight-Kampff machine results—have been voided, of course. It would hurt ticket receipts and computer sales—if the public knew our young movie star here were a droid, you know. We’ll pay you well for your services, of course. Have a nice day, sir.”

I made my way to the door—then turned around and said to the young spiffy suit. “He doesn’t know—does he?” I said loudly, so the kid could hear me.

“He’s got false memory—embedded deep in him, doesn’t he?” The suits and execs tried to shut me up. “He doesn’t know he’s an android—a ripped Replicant. A cute Nexus one at that.”

The door hissed open and then shut behind me. I had six more nefarious Nexus androids to deal with—these new corporate droids were getting pretty neat, I said to myself.

Neat and nefarious, aren’t they? WTF maybe I’ll get one myself…