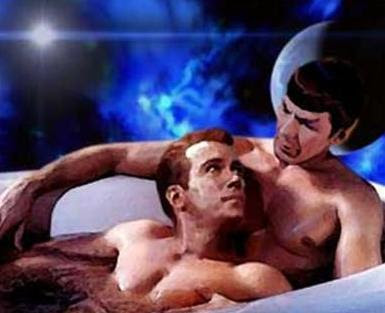 “I do, I do, I really do, Spock,” Kirk insists, reaching down in the tub between Spock’s legs.

“That’s illogical, Jim—and you know it.”

“This human emotion—love? It’s alien to me.”

“Me too,” says Captain Kirk. “But I wanna get to know it better. I wanna know it all the way. Gimme your Vulcan love, baby. I need it—I need it bad.”

Kirk starts playing with it and stroking it. The big alien thing in the tub that’s all veiny and covered with purple scales. The big alien thing that has a life of its own—so telepathic and tenacious. Slithering and wiggling down there—knowing that something is up. Jizzy in the Jacuzzi—sliding in the soothing depths of the Enterprise officer’s club’s sudsy Jacuzzi.

“It’s feeling more & more illogical down there,” Jimmy,” Spock says. “A little to the left, please.”

Pretty soon Captain Kirk is going down on Spock. Talk about interstellar oral intercourse. Kirk’s trying desperately to “mind-meld” with that big terrible reptilian snaky skanky Vulcan penis down there.

Spock’s ears are going all pointy and erect—trembling and twitching like nervous insectoid antennae. They’re glowing in the dark at the tips and wiggling in obscene alien ecstasy. Or maybe it wasn’t ecstasy?

Maybe it was some other kind of thing. Who knows how a Vulcan thinks and feels and acts about such things. Captain Kirk keeps going down on him—sliding his hands up & down Spock’s nice smooth waist and Vulcan Venus-torso.

“Gimme your Vulcan mind-meld,” Captain Kirk pleads. “I need it Spock. I need it now. I need it really bad, you big bad Vandal of the Void!!!”

Spock lets him have it. The magnificent meaty mind-meld that can read minds. Oozing and schmoozing deeper & deeper—down into the cracks and crevices of Captain Kirk’s cocky wise-ass aggressive hominid monkey-brains. The dummy monkey-brained child-idiot mind—the monkey-brained dummy captain who usually gets them all into bad trouble. Here, there everywhere—at every crummy planetary hick bus-stop that the Enterprise stops at. Kirk always betraying the Prime Directive—fucking around with the alien chicks and nailing the cute otherworldly chicks across the known universe.

Down it goes thru Captain Kirk’s throat, down past his “Trouble on Triton” Tonsils, then bending up thru Kirk’s labyrinthine membranes and cerebral cortex, drilling deep into the primitive reptilian inner world of the human brain, the cold lizard reality-mind of Killer King Kong’s evil Skull Island, the sneaky Snake in the grass, the slimy Serpent in the garden, the maddening Minotaur bull kept captive in the meandering planetary maze, the true Vulcan-Human mind-fuck detour that goes beyond the usual typical Casper milk toast mind-meld thing, the kind of deep-drilling down-and-dirty that gets down there real deep, deep into the earthy channels and twisted convection currents where thick crude flows like black gold, thick like the golden yolk of the fairytale Jack and the Beanstalk’s Golden Egg, down there in the deep dark earth beneath the sea, down there deep where the thick roots of Jack’s Giant lover-boy reaches down into the planet’s magnetic magma core, the giant’s writhing roots and family jewels, his Yggdrasil world-tree thick runny yolk, all that crude way down there deep, down there where Fe Fi Fo Fum rules the Earth, where the Golden Harp plays and plays its tune of awful aching apocalyptic pandemonium.