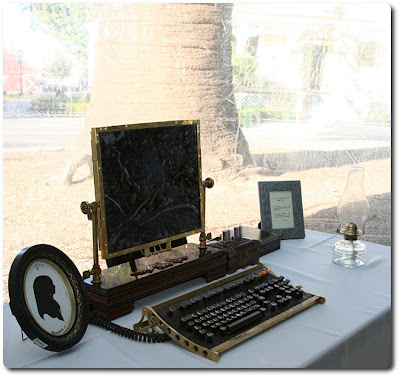 “The creatures were friendly,
and they could see in four
dimensions. They pitied
Earthlings for being able
to see only three. They had
many wonderful things to
teach Earthlings about time”
—Kurt Vonnegut,
Slaughterhouse Five

1 Tralfamadorians have the ability to read books in four dimensions, i.e. they have total recall and access to past, present and future writers.

2 They can perceive books from any genre, literary period or writerly oeuvre. They know the exact beginning, middle and end of every book in existence. Even books that haven’t been written yet by human beings.

3 Their response to a writer’s birth, life and death as well as their bibliography is—“So it goes.” They’re fatalistic about Literature—seeing the end of the universe as basically a factory planet which remainders books into pulp fiction oblivion.

4 Tralfamadorians gather together for a time-travel scifaiku literary convention yearly—on Titan, one of Saturn’s beautiful moons. There the ancient multi-dimensional beings meet to supposedly discuss the various scifaiku poems, novels and literary issues of a specific Zeitgeist in time—usually involving the grim social affairs and political aspects satirized by various Earthmen SF writers disgruntled with old dystopian Apocalypto storylines. New ones are always in demand.

6 Tralfamadore is a cybernetic cosmopolitan android world far away in the Small Magellanic Cloud. It’s the home planet to the Tralfamadorians—the survivors of an even more ancient race of intelligent machines, the Douchedroids.

7 Not much is known about the Douchedroids—except that they were another race of intelligent machines who originally developed the Tralfamadorians as super-being humanoid creatures and android boy-toys who were built to sexually entertain and give robotic meaning to their bored Douchedroid existence. Unable to achieve this task, the precursor race used the Tralfamadorians instead to extinguish themselves. The SM Vega supernova being the ancient awesome result.

8 Without masters to entertain—the Tralfamadorians voyaged thru the known universe and finally adopted the human race as their new masters even tho humanoids were extremely a stupid and ignorant monkeybrains race bound for extinction as well.

9 The Tralfamadorians are fatalistic about their new masters—usually describing the human condition as “So what?”