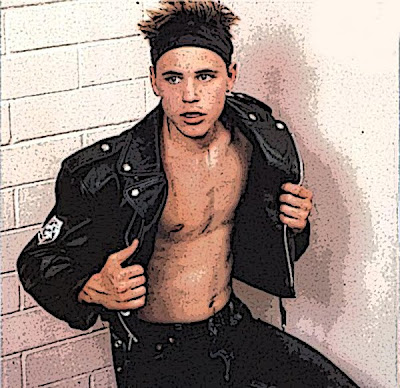 “Instantly, he
remembered dying”
—James Blish,
"A Work of Art "

I fell in love with Corey Haim—my kid brother. We both ended up skanky LA vampires—eternal Hollywood bloodsuckers. But I turned first—to the Dark Side. And then I sucked my younger brother—into the Nefarious Night.

We were all there—the whole Transylvanian cream of the crop. Bela Lugosi would’ve been green with jealousy—Ed Wood Jr. would’ve been down on his knees begging for our you know what.

There was Kiefer Sutherland—the leader of the Lost Boys bat-pack. There was Dianne Wiest—the vamp chick that fell in love with me. Plus the usual gang-bang of Santa Cruz bloodsuckers and hanger-on’s—Corey Feldman, Jamison Newland, Brooke McCarter, Billy Wirth, Alex Winter, Chance Corbitt and all the rest.

Jason Patric played me—or was it me playing him? I kinda lost track after awhile—after imbibing the magic potion in the sea-cave. And getting loaded out of my gourd—the blood of the ancient brotherhood running thru my veins.

I came home that night—Corey was alone in the house taking a bath upstairs. I slithered and crawled up the twisted staircase—and eased open the bathroom door.

There was my cute kid brother—all covered with suds and singing to himself. He looked so innocent and succulent—he gave me an instant bloodsucker boner.

He was such a naughty boy—he’d been playing with himself in the tub. He was right on the verge of shooting his wad—in fact I barely got my lips on it in time.

There wasn’t anything Corey could do—he went spaz in the tub with my fangs sunk deep into his exquisite big thick purple vein. He banged his head against the side of the tub—he almost drowned to death slipping helplessly down into the suds.

It was his first Kiss of the Vampire—the first of many kisses of the living dead to come. I got him good that first time—and from then on he was one of us.

Corey was ashamed of me at first—his own older brother a goddamn fucking bloodsucker. But then after awhile—he got jaded and used to it. Like the rest of us—every fuckin’ night.

Pretty soon he was stalking young sailors and surfers—stealthy and slimy-lipped beneath the Santa Cruz boardwalk like the rest of us.

Before you knew it—Corey was a professional bloodsucker. He’d get his lips on all the best rough trade and dirty white trash in town. A lot of cute sailors and butchy marines went AWOL on weekends—just to hang out with him all the time.

I felt ashamed that I’d turned my own kid brother—toward the evil ways of Count Dracula. I felt really bad about seducing him—to the dark side of the Force. But the feeling of remorse—only lasted a minute or so. I was too busy—feeding my habit.

We moved into an apartment—down by the cruisy boardwalk. We went looking for young creamy juicy stuff every night. I’d get my lips on him before we went out cruising—just a dab of teenage brotherly hors-d’oeuvre.

I liked the taste of our Family Tree—the tangy tart shudder our Family Jewels going down my throat. Corey was the perfect sweet & sour Thai takeout—I craved him more than any One Night Stand suck-job. My tongue knew things—that made him blush. I liked to keep things in the family—what a rush…

It was all going just fine—we were having a great time being lazy louche LA bloodsuckers. Mother had married Ed Herman—the father and head vampire of the Lost Boys gang.

Everything was perfect—until that fateful Atomic Doomsday. When WWIII started—taking with it most of California. They called it The Apocalypto Disco—because all the Living Dead danced in the streets.

Pretty soon the LA Zombies had eaten everything dead or alive or dead again—and then they all died off too in the gutters and streets. That left us Vampires without much to suck—so many of us went into Deep Sleep and didn’t wake up.

But out of the blue—all us Lost Boys were able to wake up and come-back to life again. Just like a bunch of vain, selfish Norma Desmond queens—striving desperately for our lovely come-back scene. Our campy vampire resurrection—looking for our “Sunset Boulevard” good times again.

Which is what happened. Thanks to the genius of Dr. Nobuzane Fujiwara the genetic designer—and his underground stem-cell research and recombinant DNA laboratory studio.

And thanks to the millions of dollars—graciously provided by Cecile DeMille. The all-too charming born-again Nexus-5 android Director himself—producing Hollywood blockbuster flicks with his bunker studios way down beneath the LA ruins above.

Posted by pugetopolis at 3:15 PM