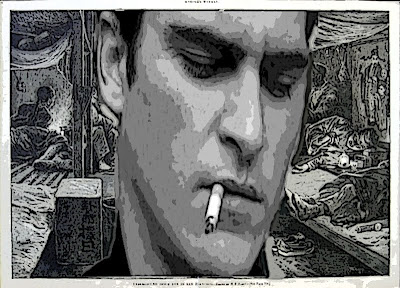 I woke up deliriously dazed and devilishly discombobulated—lying there in this big swaying hammock looking up at the convoluted ceiling.

It’s as if I’d somehow I’d got terribly intoxicated—and there I was in this lovely swinging bamboo hammock sandwiched in between two young sailors semi-awake there next to me.

Slowly I became more & more conscious—of the soothing sandalwood incense and strange exotic Chinese flute music that was floating around through the luxurious opium den chambers.

And then gradually I realized—much to my shocked pleasure and exquisite enjoyment—that I had both my nelly little hands completely full. Completely full of Big Trouble—in Little Chinatown!!!

In my right hand—I was clutching something rather nonchalantly. It seemed to be like—the tight hard gearshift of a sleek, aggressive Porsche 911 (996 Series GT3) sports car!!!

I could feel its throbbing no-nonsense power—connecting its big thick smooth knob all the way down to something huge and purring like a racetrack thoroughbred infernal machine!!!

In my left hand I ever so delicately squeezed and grasped—something that felt like a big thick throbbing Roman Candle. Getting ready to POP GOES THE WEASEL!!! Shooting and sky-rocketing up into the heavens a most piquant and penis-like pyrotechnic spurting fireworks display!!!

It made me feel so weak and dizzy—I almost fainted, steering through the sinful, shameless Sargasso Sea of my own most incredible Gay Expectations.

Holding on tight for dear life—squeezing and stroking those two elegant streamlined prongs that were guiding me through the opium pit giddy darkness. It was just awful—awfully nice…

Jaggers had known the truth—the whole truth and nothing but the truth. But he’d only told me so much—and that was all I got. He only told me—what I needed to know.

Jaggers dolled out Magwitch’s allowance to me—but didn’t reveal my true benefactor. He kept mum about a lot of things—sounds like a poker-faced attorney, doesn’t it? Yes, Jaggers with his double-triple jowls—and his aloof manners with his mistress & business affairs. But that’s another story…

Magwitch had escaped from England after all—thanks to me and my pork pie. Maybe it was our racy rendezvous—there in the churchyard cemetery that twilight evening? Anyway, Magwitch ended up in Australia—and then New Zealand. And then Hong Kong, Singapore—and the Forbidden City.

He’d done well with all his nefarious business ventures—his wheeling & dealing, his struggling & smuggling. His wrestling with the ups and downs of a very lucrative, clandestine trade—in illegal cargo shipping between Canton, Singapore and San Francisco.

Magwitch was now filthy rich—and, well, somewhat bored. He wanted to spread it around a little bit—his newfound wealth and well-being. Edwin and I were at the top of his list for some reason—first his generous allowance for me out of the blue…

And now generous Magwitch—was even giving me his younger brother!!! Edwin Drood himself!!! Right there in the hammock—next to me. On my left moiling there—moody and sullen letting me feel him up.

I squeezed it a little harder—Edwin squeezed it back. Surely both Magwitch and Edwin were telepathic brothers—their well-endowed juicy manhoods seemed to twitch at the same time!!! I couldn’t believe my Fortune Cookie Good Fortune!!! Double your Trouble—Double your Fun!!!

Could it be that Mother Nature—in her vast ancient Animal Knowledge and Carnal Know-How. Sensed how deeply I needed them both—down there in the dark exquisite Bargain Basement of Love?

Down there where the Wolves howl nightly at the Moon—when the Wolfbane blooms and the Fangs bite deep into my Neck? When I run my trembling fingers—through their Golden Fleece? That lovely curly-cue, tight little triangular patch of pouty pubes?

Estella would’ve simply turned green with hate and jealousy—penis-envy writhing through her S & M heart. Seeing what was in store for me—the rest of the night and into the weekend.
.
Probably she’d have simmered and burned—like a neon chartreuse flame with her ogling eyes. Seeing the two nude young studs getting it on with me—in the same huge swaying hammock in that awful den of inequity...

Stoned out of their gourds and luxuriating in Ah Sing’s special opium den bedroom—the Flowery Heaven opening up like some decadent lavender orchid blooming just for us. Reserved for the two studs—the captain and his sailorboy kid brother. us. It was time to die forever—oozing and dying slowly in my arms, as the jade night leaned over us.

Somehow I’d ended up here in this exotically decadent, heavenly space—the orphan in me sobbing and crying with long-lost joy. Rough trade had always appealed to me—and now I was right in the middle of it.

I died a million times that night—and that wasn’t enough for me. Even Edwin was cynically shocked—by how much I needed him. I was as needy as the Chinese cook—aboard The Wake of the Red Witch. While Magwitch smiled—and looked on. He had my number—he knew I’d like Edwin. And maybe Edwin—would end up liking me?

I confess that I was no virgin to fine rough trade—but usually it was pretty dangerous and untouchable down by the docks where rough trade came and went. I was still somewhat the shy country boy—Miss Havisham’s fumbling lonely teenage boytoy who didn’t know shit.

Usually I shunned the East End—hardly ever cruising the docks. I certainly didn’t wanna end up dead-drunk—or somehow deliriously doomed and diseased? What’s a girl to do?

And yet here I was—swooning away in an oriental hammock of forbidden male pleasures. Here I was with handsome Magwitch again—and his young over-sexed, nefarious brother. Sequestered silently here in this strange opium den—full of infernal incense, intoxicating fumes and exotic drugs.

Instead of just one—I had two tough convict types to deal with. One in each hand—going to town. Until Edwin couldn’t take it any longer—and pulled me over on top of him. Lubricated with peach-fuzz ointments and cherry blossom salves—to anoint my tender virgin you-know-what to the inevitable plunge most Minotaur-esque. The engorgement of my, well—most anticipated Greatest Expectation…

What in the world was I ever going to do—after this dizzy evening in the depths of depravity? Could I ever go back to being—merely just another dizzy fag from London? How could I ever escape this strangely sophisticated yet primitive oriental Flowery Kingdom—tucked away so faraway and yet so close to my deepest gay expectations?

I could feel Ah Sing’s whole ancient, rotting brownstone mansion—leaning and tilting backwards and downward straight to hell. Pulling me with it—under the supernatural weight of these two young superhuman sailormen.

The whole dream mansion—like some “House on Haunted Hill.” It seemed to heave and breathe on its own—and I could feel its knowing, leering rafters above me bending downward to Hades as well. I could feel the rotting rafters—moving back & forth like moaning ship timbers. And here we were—in the captain’s cabin of Magwitch’s fast Clipper ship.

Where were we going—where was it taking me? The floorboards in the special guest den—kept pleading with me to run and hide. The floorboards creaked and moaned—undulating backwards and forwards. Upward and downward like waves they went—taking me with them whence I knew not where?

Somehow I’d been Shanghaied—and now I was in Magwitch’s captain’s chambers!?! The “Wake of the Red Witch” had become my new home—it wasn’t a pipedream anymore. The hammock wasn’t in Ah Sing’s joint anymore—I was aboard Magwitch’s fast Clipper ship!!!

I was beginning to get seasick and dizzy—I didn’t have sea-legs like Edwin and Magwitch. Those sea-legs were good for seafaring adventures—like wrapping around my neck real tight. Squeezing me tight—just like I squeezed them tight too.

I must have passed out in Ah Sing’s secretive, decadent den of inequity—off to the side of that raunchy, ratty Highway Going Straight to Hell. I must have been waylayed by bandits—along that cursed old Ratcliff Highway.

Surely it was the Pipe—that made me do it. The last thing I remembered—was turning slowly into a big fat ugly Rat. I had this nervous twitching nose—all wrinkly and rodent-like. Wiggling away with these little delicate nose-hairs—all fidgety inside my nostrils.

I could feel each tingling hair follicle—in my ratty raunchy rodent nostrils. I could smell these two fuming crotches next to me—I could feel these two writhing Snakes I had in each hand. Stroking them in the darkness—in some eerie, ancient Gypsy caravan.

There I was with Maria Ouspenskaya—whipping the horses to go faster. While I was locked in the dumpy trailer’s backroom—as we all went weaseling our way down narrow Balkan highways to the moody sea.

Magwitch took a toke—and passed the evil pipe to me. I didn’t have to open my eyes—I could see right through my thin translucent eyelids. Then I passed the pipe—to Edwin Drood. They both leaned over me—how could I ever go back to London now?

Magwitch laughed—grabbing me by my ass. He yanked me over closer to him—Edwin pulled me hard the other way. Soon I was getting it in both ends—the blushing bride that Miss Havisham could never be on her bridal night.

Deliriously wrapped up in muscular arms and legs—had I not always wished to be squeezed to death this way? How many wasted lifetimes had I lost—between then & now, now & then? Between the exquisite churchyard cemetery tryst—and this swinging, swaying hammock that was now me?

Posted by pugetopolis at 2:43 AM