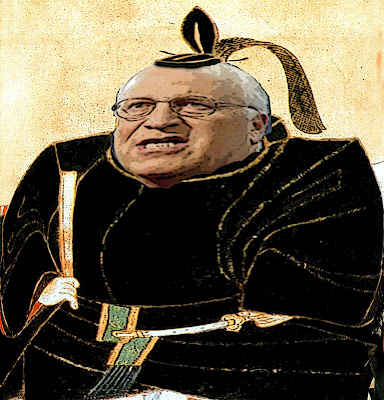 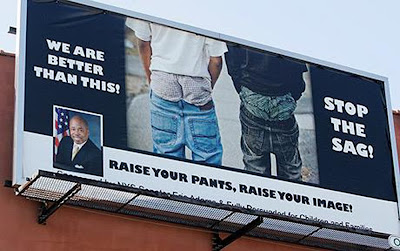 “Lower your pants—
Raise your image!!!”
—The Mayor of New Orleans

Some might call it—an obscene invasion from another world. A shameless invasion—an invasion of privacy and moral propriety. An obscene flaunting of young male sexuality—a shoving-in-your-face of lewd, rude, nude, gauche bedroom sexuality!!!

After all, there’s nothing worse than flaunting it—surely Hollywood, striptease nightclubs, Mardi Gras, vaudeville, circuses and carnival sideshows are the proper places for things like that?

Like what? One might ask—what is it about being a half-naked, half-nude, half-clothed young male with his pants hanging down past his shorts? This shameless, perverted, almost homoerotic Exhibitionism—of what naked apes should surely be ashamed of?

Isn’t that what the proverbial Fig Leaf is all about? Symbolically, biblically, even shamefacedly—covering up what surely nobody wants to see? Surely haughty fags and bored femmes fatales—must be yawning and laughing themselves to death. So much heartbreaking, hand-wringing hullabaloo—over such a minor passing fashion of so-so young male haute couture?

White trash boyz do it. Cool black studs do it. Alligator boyz do it. What am supposed to do—ignore it? Surely, it’s an atrociously obscene invasion—of my precious precocious privacy? The more—the better, baby!!!

De-Evolution of the species—is catching up with us. All our wise-ass monkey-brains and high-tech monkey-shines—have simply been for naught.

The primitive reptilian parts of our brains—have taken over again. So much for out stylish, chic, curly-cue, curvaceous, high IQ cerebellums.!?!

Monkey-brains vs. snarky snake-brains… A sort of helpless slipping and sliding—backwards and forwards in time. In and out of the realms of entropy and death—monkey-consciousness vs. crococile consciousness?

I don’t think it’s just a matter of letting it all hang out—although I can imagine what most religious freaks and unhappy heteros might think. Shocked by rebellious young male sexuality—exposing their teenage truant thin waistlines even further and further downwards to their pubes. Erotically, narcissistically—flaunting their young male sexuality.

It really doesn’t bother me at all—one little itsy-bitsy inch or two. Or three or four—or five or six inches. Low-slung pants and cute bellybuttons—are a real turn-on for lots of chicks and guyz. And how many Desperate Housewives are there skulking around—out there who crave it even more than you or me?

One time I said to this cute guy—standing in the bus with his low-hung pants sticking in my face: “Gee whiz, man. Is that thing for me, huh, huh???”

He ignored me, of course—and looked away. It was as if he’d become, well, suddenly somewhat embarrassed by it all—by the oblong, obvious obliviousness of his medulla oblonga stretching down into his pants. What a nice slinky schlong!!!

I got to study it closely plus his cute bellybutton—all the way downtown mile after exquisite mile. The bus lurched and leaned romantically—this way and that way. He hung tightly to a strap hanging down from the ceiling above—while his lower torso temptingly bumped and grinded its obscene way deeply into my worshipful, exquisitely appalled face!!! I could’ve taken that humpy bus ride all the way to the moon and back—and not budged a single inch!!! Talk about a comely commute!!!

Yes, Devo aesthetics be cool with me, baby—just right for a stylish survival of the fittest everyday. If you’re young and handsome—why not flaunt it while you’ve got it? Use it or lose it, man—it doesn’t last long dontchaknow!!! He mooned me—with his nice boxer-shorts buns. I got my big fat Gogol nose—deep into his tight little crack and kept it there!!!

Oh Lordy!!! It reminds me of that classic monster movie scene—in “King Kong” when the giant Naked Ape battles that huge snake in his secret mountain lair. Protecting Fay Wray from those evil muscular coils—that monstrous, prehistoric Python that wanted to gobble up that pretty Brooklyn girl!!! That awful primeval Anaconda snake—slithering secretly in that awful drums-beating-off-in-the-night Skull Island. Beauty and the Beast—luring in that primitive oozing Jurassic jungle cave up there in the clouds!!!

It’s as if when I encounter a young guy downtown or at the suburban mall—with his pants hanging down all the way past his knees. It’s as if I can hear plain as day—this seminal Primal Scream going on inside the kid. A life-and-death struggle—between his youthful, naïve “monkey-brain” up there and his primitive, primeval “dick-brain” down below.

Between his risqué reptilian not-very-bashful brainstem—way down there between his legs. Between his ogling medulla oblonga bongo beating and drumming—stretching all the way down into his shorts.

Going down—down, down, down into louche, uncouth Jurassic Jizzville. A life and death wrestling match contest—between that and his flimsy, cosmopolitan cerebellum coiling around up there in his creepy little cortex. Talk about Forbidden Planet—The Day the Earth Stood Still!!! Talk about Doctor Jekyll—and Mr. Hyde!!! Poor low-slung Bad Boyz—poor lamentable Youth today!!!

All that Zydeco Gator Love, baby—and youthful Creole comeliness!!! I’ve always had the hots—for those long humid Mexican Nights of the Iguana!!! Tied up in my hammock—with Ave Gardner crooning soothing lullabies to me all night long…