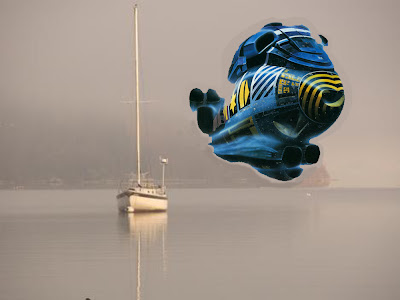 “Those who looked to the future
from their communes in the 1960s
and 1970s could hardly be expected
to acknowledge roots from an
earlier generation.”
—Charles Pierce LeWarne,
Utopias on Puget Sound (1885-1915)

I took Kurt over to Freeland—there at the southern tip of Holmes Harbor up from Useless Bay. That’s where the new spaceport is—Freeland USA.

The thing about dystopian time warps—is that they pretty much stay in the same spot. Whether it’s the utopias from the late 19th and early 20th centuries—or the more recent hippie ones from the 1960s and 1970s. I explained it to Kurt—that’s the way these time-warps work around the clock.

Except like George Orwell’s 1984—the clocks are always busy at work striking thirteen all the time. So that Freeland was waiting to happen—and once it happened, it kept happening. And it’s still going on now. The hippies and their communes—were time-warp manifestations of the moment. They came and went—but like the older utopias, the Utopia is still there. Or rather here.

Utopian time-warps are like magnets—they arrange time and space around themselves. They generate dystopian vibes as well—which are part and parcel of the way things work. For every utopian action on the U-screen—there’s an equal dystopian reaction as well. This surprises people—when it happens. But it happens—all the time.

Everyone has heard about the Million Dollar Hole-in-One—sponsored by Puget Sound Energy. A free trip vacation giveaway—from China City. For businesses, the Freeland Golf Classic is the Chamber's biggest fundraiser of the year.

“Become a hole sponsor and put your business out front on the green!” cries out the headlines.

“Treat your clients to a great day of golf by being a Team Sponsor!” the ads proclaim.

“Get your product out front and center by sponsoring a table at the dinner. Give us a call, or an email, or take a look at the details!” the Chamber exclaim.

But little did anyone—expect such an interplanetary “Hole in One” to happen! It wasn’t an interstellar Hole in One!?!. Nor was it, heaven forbid, one of those Black Hole intergalactic Holes in One!!!

Everybody on the golf course—stood there gasping in wonder up at the sky. The whole town of Freeland—came to a sudden stop.

Just like Washington DC suddenly stopped—when Klaatu landed his flying saucer in the baseball park during The Day the World Stood Still (1951).

Diners at Gerry’s Kitchen on Main Street and Gordon’s On Blueberry Hill on Woodard Avenue—stopped in the middle of their gourmet burgers and succulent crabcakes—gawking up at the strange spaceship hovering in Holmes’ Harbor.

Useless drunks dropped their martinis at the Useless Bay Country Club bar—and got even more useless after seeing what they saw.

An astute youth working at The Raven & The Spade organic vegetable farm and produce stand said—“Hey! That spaceship looks just like the one on ≡V≡ my video game back home!!!”

The spaceship was actually—from the depths of time. That’s how utopian time-warps work—they send radar-like signals out into the vast reaches of Time itself.

The old utopian experiments along Puget Sound have long since passed from existence—most hippie communes and earlier utopian communities are virtually beyond memory now.

Utopian experiments like Freeland on Whidbey Island were throwbacks—even back then in the late 19th and early 20th centuries.

Freeland utopianists were out of step with mainstream radicalism in their own time—and had an uncertain influence on the later radicalism of Washington. Very much like the hippie utopias.

Looking back on the hippie dayz of the 1960s and 1970s—gives one a strange déjà vu sense of utopian communitarian simpatico with Freeland and those earlier utopians when we read about them. Little else remains of them—except for some dusty archives in the libraries. Some old radical newspapers—from back then in Seattle.

There were similarities and differences. The Viet Nam War rather than the IWW—was one big difference. The closing down of I-5 after the Cambodian invasion and the ongoing draft—showed how disillusioned and disenchanted the youth were with Nixon and the Establishment. Many flocked to communes—in search of a new life style.

At the end of 1970, the New York Times estimated conservatively—that nearly 2000 communes existed in 34 states. Many of them along the shores and in the valleys of the Pacific Northwest.

The older utopias tended to be “politico-economic” critiques of society—often small town laborers and artisans who had been stung by inequality and deprivation in an economic society that even then was huge and impersonal.

While the 1960s communes—tended to be “psychosocial critiques” opining that society had put people out of touch with others and with their own fundamental nature. These new utopians sought—liberating situations that were conducive to intimacy and psychological health.

The 1960s communes are gone now—little remains of them or their predecessor utopians. Music from that period still hovers around—reminding those who lived through that period nostalgically of the zeitgeist back then. Baby boomers especially can remember those somewhat utopian halcyon dayz with bittersweet nostalgia—back when they were hippies and flower children.

Such music and hippie days lifestyles—may seem somewhat naïve and strange to the X-Generation today. Yet who knows? Perhaps subsequent forthcoming generational tides and undertow-currents yet to come—will try the same thing?

Many theories exist and opinions vary about why these utopias came and went. Freeland still exists here on Whidbey Island though—between Holmes Harbor and Useless Bay. Perhaps the utopian sprit and desire for a better culture—still lives on today in different ways?

Personally, I create my own sci-fi utopia each day—down here in my little beachside shack. Kurt helps me sometimes—with a line or two. Words give me clothing—to hide his nakedness. They clothe the moment—then later on I take his clothes off.

The stream that runs down through the beach—is a Lethean tributary of lost sentiments and found feelings. They have a utopian uplift effect—on the process of my writing.

The cedars and fir trees—I feel their telepathic empathies, these looming prehistoric phantoms. The ancient forest leading down to the beach—the beach parallel with other shacks, beach-homes, all the hippies that have come and gone, all sorts of forgotten commune actualities.

Living down here by Saratoga Passage—I’ve learned so much and yet so little. Fragmentary snapshots—a continuous camera-eye in the middle of what was always rotting and withering away.

I feel a harmony—with decay and driftwood. Am I not part of the same—decadent architectural artifice here in this neo-Gothic noir world of shadows, shifting semi-darknesses?