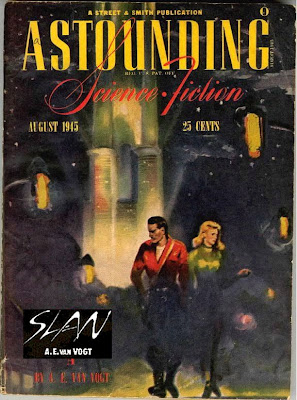 “To any Slan who
penetrates this far—
there is a secret passage
into the palace”
—A.E. van Vogt, Slan

Jommy was a Slan. He was cute and goodlooking—he could read my mind. He knew what I wanted—he let me have it. It was just awful—awfully nice.

They lived in the U-District—not far from campus. Across I-5—in the Wallingford District. On Thackeray Street—how literary can you get?

Jommy was telepathic—he could read minds. It saved a lot of time—you know what I mean? The more I got him off—the more natural it became.

Like Tom and Pat Bartlett—in Heinlein’s juvie Time for the Stars (1956). Jommy’s exquisite teenage telepathic tendrils—reaching deep into my brain.

Sex with Slan boyz—was something else. Pretty soon it was just like Heinlein said—there was plenty of time for the stars. And all the planets in between…

I fell in love with Jommy Cross—talk about pulp fiction déjà vu. Fifties Ace paperback flashbacks—nostalgic jump-cuts into the future. The way he talked to me—without moving his pouty lips. He was such a moody kid—it hurt me just looking at him.

He could be in Portland—or Alpha Centauri for all I was concerned. It didn’t make any difference—where we were. He was always there—in the back of my mind. That’s the way—Astounding Science Fiction worked for me.

That’s how the Fabulation of the Fifties—doesn’t die. The pulp fiction reality of Slan love—isn’t that what it was like back then? It’s even better now—let the jouissance flow. The way it was in noir rainy Seattle—back then in the late Sixties.

Let’s face it—I was queer for him. After the first time—I was really fucked. Talk about being— Stranger in a Strange Land. I needed a Mirror for Observers really bad—to get outta that one.

I wasn’t a butchy Heinlein Space Cadet either—I wasn’t particularly Star Trooper material. I checked the box—instead of being drafted. Viet Nam was Forbidden Planet—as far as I was concerned.

I was a lover—not a fighter. I didn’t feel guilty—about being a hippie. Late Capitalism and postcolonial jive—didn’t appeal to me.

Instead I was seriously addicted to Slan love. I didn’t have to jive my way into Jommy’s pants—he was already inside my mind. It just kinda happened naturally. If it wasn’t for Slan love—I wouldn’t be here today.

“It’s pretty good…” Kid got out,
shifted his weight, and decided
that Lanya had the right idea:
talking was silly. He didn’t come
in Denny’s ass, but in hers.”
—Samuel R. Delany, Dhalgren

Three-ways help—Kimi was a Japanese chick. She loved Jommy too—the same way I did. We couldn’t help it—once you go Slan there’s no turning back.

Kimi and I let our fingers—do the walking. Whenever we’d thumb our way—through his big thick Pugetopolis Phonebook—he was always hanging out there in the Yellow Pages. Under 10” Slan love…

Kimi was a worse size-queen than me—but of course she used another pair of lips to get him off.

Kimi had a telepathic pussy—she was a Slan too. Van Vogt was just being polite—the real writhing telepathic tendrils were down there. I was a quick study—I caught on fast. How I loved—to grok Jommy’s groin. My face smothered—with telepathic snakes.

It’s embarrassing at first—knowing somebody can read all your thoughts and know all your feelings. Especially the dark ones—like wanting to make love. Jommy and Kimi laughed at me—mind-melding with them was like falling through a trapdoor.

It always caught me by surprise. I’d always end up—falling down thru space. Snapping my neck—at the end of a long rope. Sprong!!! Wiggle. Wiggle…….

It was like spraining—my neck. The ultimate ecstatic Charley Horse. All the way to Titan—and back again. It lasted forever—I had to dig my fingernails deep into the mattress & hold tight. Otherwise—I would surely slip off—into the Sargasso Sea depths.

That was back in the late ’60s & early 70’s. After the Chicago Convention—when everything kinda went crazy. Paris went revolt. Nixon was sweating and smacking his lips—on Planet TV.

Guyz were dying in Nam by the thousands—my boomer generation was being had. We were under the heel—of hardcore late capitalism. Tricky Dick and his Watergate gang—making a run for 1984 Dystop Apocalypse once again.

So somehow I ended up in Pugetopolis in 1968—talk about Forbidden Planet. The Space Needle looming up there over me—Funny seeing two moons up in the sky. But you get used to it.

I got a job in the Blue Moon Tavern—that’s where I met Jommy Cross. The first time—one dark rainy Saturday night. There on 45th—next to the Freeway. An old hangout—for Theodore Roethke. Elizabeth Bishop teaching after he died on Bainbridge Island—living there on Brooklyn Avenue near campus.

All it took was one look—and I knew the awful truth. The fickle finger of fate—got stuck right up my tight little ass that fateful night. It wasn’t just Jommy’s middle finger either—it was the whole works.

He took me home. From then on I was his—a Slan Slave for love. I woke up every morning—with Beethoven’s Nine Inches playing in my head. Funny how things work out—sometimes for the better.

Jommy showed me—his naked tendrils. The secret telepathic ones—the ones that made him a true Slan. They were down there in his pubes—down there in his wiry jet-black pubes. They were golden—tendrils of light. They glowed in the dark—they were like a nest of lucid snakes.

Both Kimi and I—were totally blown away by it. How his Slan tendrils writhed and slithered—pale neon blues and marquee pinks at night in bed. Who would have ever guessed—Jommy had a pube-patch of telepathic iridescent neon snakes down there?

The first time he let me see them—we were in bed upstairs. We’d just had sex—he was stretched out relaxed. He was smoking a ju-ju—with his eyes closed. Some sitar music was playing—sandalwood incense, Madras sheets and all the usual hippie equipage back then.

Jommy didn’t take showers—which was okay with me. He was just a freshman then—but extremely mature. After working out with the gym team—he’d come home smelling skanky. He had a naturally athletic build—his abs were worth dying for.

His armpits were the best—simply stinking with divine male pheromones. His tendrils were lurking there too—turning me into a porky pig snuffling for truffles. He smelled like a male so bad—it made me weak in the knees.

His Slan pits and pubes—they were like libido magnets for my lips. “Kiss Me, Deadly”—they whispered in my ears. He let me take him for—“The Long Goodbye.” It would have made—Raymond Chandler jealous I’m sure.

We got him off at night—when Kimi came home from work. We’d order some pizza—get loaded. Then get down to business—inch by telepathic inch. She’d drag it out—the first time. She put a lot of mileage—on Jommy’s ten inches. Then I’d get sloppy seconds—it seemed to last forever.

Without a doubt—it was Bad Seed. Bad Seed and Bad Biology. There was lots of Brain Damage—I began devolving fast.

Pretty soon—I was back in Jurassic Park. Beneath a Paleozoic moon—making love to Mosasaurs in the deep. Slan love—is serious business.

Kier Gray had plans for us—Kimi was actually his daughter Kathleen. Jommy was urgently needed—to complete the Slan agenda.

Jommy was always tense and nervous—a torrent of sibilant pulsations always flowing through him. From his toes—to the tip of his head. It was like sticking my tongue in a light socket—whenever I made love to him.

I know it sounds shocking—but it was a shame to let something like that go to waste. Afterwards, when I was at work at the Blue Moon—I could feel the faintest trembling tendrils of young Slan manhood. Slithering and oozing inside me—as I slowly started turning into a Slan too.

Jommy was a true Slan—his X-ray eyes saw right through me. I could actually feel his quick flowing nerve-and-bloodstream—flowing like the sluggish Duwamish River through me. It was something Samuel Lann discovered—nearly 1500 years in the future. I was becoming a tendrilless mutant—slightly ahead of time.

Jommy always seemed like—he was acting telepathically tongue-in-cheek. That there was always something not being said—like he was holding back some secret insider-joke or non-sequitur one-liner to himself.

I suppose that’s what it’s like—falling in love with somebody from the future. You don’t have to say anything—it’s already been said. You can half-finish a sentence or thought—letting the rest of it complete itself the way lovers do.

Jommy wasn’t perfect—it seemed like his paranormal psyche was always tripping him up. He had a lot of cocky self-confidence—that never seemed to fail him.

But it was a tight-wire act most of the time—he seemed to enjoy playing it out. Keeping Kimi and me—entertained by it all. He liked the ménage à trios thing—which was okay with me. He liked it both ways—he needed both of us it seems.

I guess it goes back to mind-reading—how he got off on the both of us making love to him. He had some kind of Slan intuition and know-how—joining with both Kimi and me. They were a sophisticated couple—more sophisticated than me. I was just a naïve amateur—way back then. And still am—I suppose.

“Slow down, there, kimosabe,” he’d say. Taking his time to murder my bruised lips some more—during those shameless escapades on Thackeray. He could sense my sudden panicky slam bam thank you man angst—with me thinking each time was the last.

For some reason I had fictional John Petty—on my mind. Stealthy, sneaky Petty and his bodyguard killer—behind the wheel of that Cadillac limousine. Sam Elders the chauffeur thug—that nightmare trip along Capital Avenue. With Jommy hanging on for dear life—on the bumpy fender.

I usually shrugged it off—it was just Jommy’s mind bleeding into mine. Sometimes I could feel him—stiffen and grow taut. As if he were suddenly filled with some kind of awful rogue animal intelligence—a kind of complete Null-A obliteration flashing through his mind.