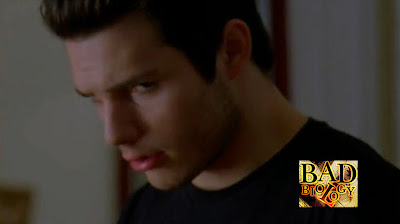 It was a dark and rainy night—
In the U-District—over on Brooklyn Avenue.

Friday night—I was at Scarecrow Video.
Talk about Bad Biology—it’s right up my alley.

A typical neo-noir—Night of the Living Dead.
Moiling about in Mudville—here in Seattle.

Scarecrow Video—lovely ratty joint.
You know where that is, don’t you, huh?

A really weird place—full of fucked-up flicks.
Kinda neat—a seedy joint for seedy guyz like me.

I should know—I’m a creep dontchaknow?
A real Creepazoid (1987)—from way back when.

Guyz tell me I’m a creep—chicks too.
But I can’t help it—it’s Bad Biology.

That shameless flick—with Nancy Kelly.
“A WOMAN'S SHAME...Out in the Open!!!”

Whether you want ‘em—or not.
Give, give, give—and all Take.

Jacques Tourneau—talks about Cat People.
I Walked with a Zombie—Curse of the Demon.

Prince Radian—The Stump Man.
What kinda sex life—did he have?

I’m just a normal—Two-Headed Transplant.
They Saved Hitler’s Brain—just for me!!!

That’s why I hang out—at Scarecrow Video.
You could say—it’s my home away from home.

Not too far from—Night of the Living Dead (1968).
The story of my so-called life—my Romero romance.

You see, I’d just got into town—what a fool I was.
At the height of the Viet Nam War—and all that.

Deep Throat and Nixon—were still getting it on.
In parking lot downstairs—at the Watergate Motel.

What a bummer—for all us Baby Boomer boyz…
Don’t flunk out, baby—or you’ll die in Nam!!!

Naturally I was at the Top of the List—
Until I flipped my wrist—and checked the Box!!!

That’s the story of my life—the Great Pretender.
TPTB had my number—me down my knees…

I fell in love with this guy—a cute young gymnast.
All muscles—and no brains on the UW gym team.

Totally Bad Seed—but I really got off on him.
Who needs IQ—when you’ve got Animal Intelligence?

And the camera—gazes out at her
From in there—Private Dick POV!!!

Ogling outta there dontchaknow?
Do we really need a Spoiler Alert, huh?

Have you ever wondered why—
The ancient Greeks put Eyeballs…

Down there on that ugly little—
Troublesome Whatjamajigger?

That Pulp Fiction sick puppy—
Ogling out at Jizzy Jennifer?

Down there—that’s where
The Good, the Bad & the Ugly live.

.
Down there—that’s where
Big boyz—got all their brains.

Posted by pugetopolis at 1:06 AM