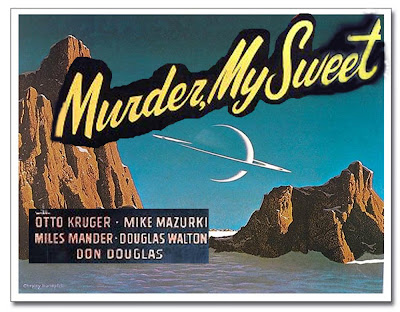 “It was another one of
those things that came
easy. You got in like
you belonged there.”
—Mickey Spillane

All I know is that suddenly there was this chick floating there in the glare of my Jet’ab headlights—waving her arms like she was trying to fly. She had a Velcro fly-belt on—but it wasn’t doing her much good. Except for getting killed…

I cursed myself for taking such a shadowy low-life shortcut—through one of Titan Town’s seamy back alleys. But I was cruising for trouble as usual—working on a missing droid case. There were lots of those kind of things—happening on Titan.

Droids, people, mutants—disappearing in the night. Nacht and Nebel beneath Saturn’s rings—it wasn’t pretty. Whether planned it or not—it was still just business that’s all.

Trouble was my business.

I gunned it—wrenching the wheel over. Feeling the sickening sinking of power—as my Jet’ab fishtailed in the dark crummy night. The fins ran up against the side of the grimy stucco apartment walls—gouging a long narrow furrow a block long along the alley.

“Not what I expected,” I said to myself, switching off the power field, smelling the plastic-rexeroid stench streaking along the sides of the high rise skyscraper alleyway. The Monojets in reverse turned sullenly ultraviolet—as I descended from the ramps and down past the endless floors and windows.

Finally, down there in the garbage cans, bins and scurrying rats—the brakes kicked in and things came to a screeching halt. Somehow I’d managed a sweeping curve around the crazy chick. For a few split-seconds she’d been living on borrowed time—floating there and trying to stay in the beam of my headlights.

I sat there and let myself shake. The butt of my cigarette had got smashed on the windshield careening forward—what a waste of a decent Martian Gold filter-tip. I’d nearly pissed my pants—I flipped down the window.

The stink of burning plastic and brake lining hung in the air—my only thought being every damn thing I’d ever wanted to say to some harebrained child-idiot dame. Wait until I got my hands on her.

But that’s as far as I got. Suddenly she’d floated down a couple of stories—and there she was beside me slamming the door shut.

“Thanks mister,” she said.

Calm down, I said to myself. She’s gotta be a android fruitcake. Don’t slap her. Not yet. Hold your breath a little bit—let it come out easy.

The silence in the Jet’ab was thick as lead—you could slice it with an electro-graphic magnetic razor. I didn’t say anything. Maybe I’d bend her over the fender—and fuck a little common sense into her head. Or boot her out right then—and go home for a drink.

I fumbled for another cigarette—but she snatched it outta my fingers. For the first time I noticed—her hands were shaking just like mine. I lit hers—got out one for me. We sat there—with our eyes closed.

Behind me the lights from another Jet’ab was coming around the curve. Her eyes stared back at it in the rearview mirror—fear narrowing them tight. “You gonna just sit here all night, mister?”

“I dunno want I wanna do. Maybe I’ll shove you out and let you float off somewhere else. You sure don’t know how to operate an anti-grav fly-belt that’s for sure.”

The headlights of the Jet’taxi shined in through the rear window—I got a good look at her. She was rigid—her face frozen in fear. Only when the red tail-lights of the taxi turned into pin points down the alley—only then she let out her breath and leaned back in the seat.

It was kinda strange—the way it is with all androids. She was good-looking—but her face was more interesting than pretty. Her purple-green eyes, her narrow forehead, her big lips, her tawny hair in a ponytail running down her back.

The rest of her wrapped up tightly in a tailored trench coat—belted around her waist. I still remember her as something sudden and dangerous—conjured up too quickly floating in front of my car. A dreamy droid dame. A damn-fool crazy android girl—with holes in her head.

I pushed the stalled engine into action again—letting the gears crunch and grind their way back into life. Then I took off holding the wheel tight—letting my brain sort things out as best they could.

Accidents happen—a guy doesn’t mind those kind of things happening. In my business one expects surprises—like when you’re following a guy going seventy down a local skuzzy alley. Maybe he takes a shot at you—with a laser-canon like some cheap gunsel.

But you don’t expect a beautiful girl to jump out of the dark at you—even if it’s just another droid dame. I opened the window—all the way down. I drank in some of the fresh night air—the lazy looping rings of Saturn hanging way up there over us. It seemed more like a blind date than anything—I said myself.

“What were you doing up there?”

“Running away from something?”

She looked quickly over at me—her tongue snaking out over her lips. She was about twenty or so—tiny and delicately put together. She looked like she was still floating. Her hair was wave cut—much shorter than the current fashion of pageboy curls down the neck.

Her eyes were slate-gray—she had almost no expression when she looked at me. She leaned over near me—smiling with her mouth. She had little sharp predatory teeth—as white as the Titan snow used to be. They glistened in the neon lights—passing us far down below. Her lips were big and taut lips—her face lacked any color and she looked scared.

She checked me out—acted a little puzzled. She was thinking to herself. I could see from just this little encounter—that my thinking was going to bother her. She wasn’t used to wise-ass detectives…

“That’s a funny name for a straight guy. Gary Ganymede. Sure you’re not gay?”

She licked her lips and leaned her head a little—looking at me up and down. Then she got pouty—and put her hand on my leg. .

It was like a theater curtain rising—I couldn’t help it. What’s a guy supposed to do—when a chick gets all four paws on you? Roll over on your back—pretend you’re dead?

“Are you a Space Hockey player?” she asked, when I just kept driving.

“You sure do have lots of muscles—your legs are droid, but this other thing isn’t that’s for sure.”

“I don’t play those kinds of games anymore—I’m a Saturn sleuth guy doing a job tonight. You kinda interrupted it—my train of thought.”

I blew some Martian zingy smoke—down through my inflared nostrils. They were getting erect again—I couldn’t help it. It had been a long time. The sweet-smelling smoke—mingled with her tiny white fingers down between my legs.

“I—I—“ She tossed her head back and looked away from me. A darker brooding rich color stained her pale face—there in the rather dim light of the dashboard.

“I didn’t say anything. You’re the one that’s the big tease. Hanging out there in the middle of the night. Floating around in some dark alley. Just looking for trouble. You’re lucky I didn’t smear you—up against the wall of that Titan San Bernardino Tower back there. Your pretty face—would’ve been block long.”

.
“Thanks for the advice,” she said sarcastically, “I’ll know better next time.”

She turned away from me—pouting some more. Actually I kind of liked it—the way she pouted and sucked her thumb. It was a curious android finger—long and narrow, curved and double-jointed. She bit it and sucked it slowly—turning it around in her mouth like a latex pacifier.

“Pull a trick like that last one—and there won’t be another next time. You damn near became a Dayglo mural advertisement—on the face of that crummy apartment tower, honey.”

“I don’t care what you do—as long as you don’t end up getting strained through my radiator.”

She looked away from me some more—blowing smoke on the windshield. “Look, I’m grateful for the ride. I’m sorry I scared the shit out you. But if you don’t mind, Mr. Spillane, just shut up and drive. Take me somewhere—and let me out.”

I didn’t want to take her somewhere though—I didn’t want to dump her out in the middle of Titan Town late at night. I moved my mouth into a grin. I didn’t know what to do—a dame with nerve like that sure could make mess a guy up before he gave her the boot.

“It’s a hell of a place for anybody to be stranded—hanging up there in the air with a dying Velcro grav-belt. I guess I should’ve done something. Almost. Where do you wanna go?”

She tilted herself towards me—I could feel her going rubber-legged instantly. I had to hold her close—to hold her up. When her head was against my chest—she screwed around downstairs breathing hard.

I shook my head—I didn’t know what I was getting into. I eased the Jet’ab down to one of the cyborg-ghettos down below—they dotted the landscape around Titan City like any Earthside ghetto. Rio, LA, Chicago—they were all the same. Late capitalism was still dirty business—there’d always be ghettos even out on Pluto.

I could feel her watching me—as we landed by some dying bougainvillea bushes next to a ruined art deco villa out on the outskirts of town.

I looked over at her—she’d unbelted her trench coat and spread it open. She was sleekly naked underneath—her satin skin invited me to explore the curve and valleys that she let me see.

She was breathing heavy—squirming in the seat. Making beautifully obscene gestures—smiling at me. She slid out of the rest of the trench coat—taking my hand in hers with a sudden warmth and urgency. I could feel her bare flesh in the darkness—her thighs so smooth and svelte.

There was no doubting her intensity—squeezing her legs together. Letting me explore the curves and secrets—hidden in the shadows down there. I almost forgot she was an android—she was so familiar and more than just a cyborg creation.

I reached down—and explored between her legs. It was somewhat of a subtle surprise—to find out that she was actually a man down there.

I felt like I was a kid again—way back when. Back when I saw a dogcatcher—about to net a dog. I kicked him in the shins—grabbed the pup and ran. The crazy dumb mutt—bit me and got away. But I was still glad—I did it.

Posted by pugetopolis at 3:55 AM